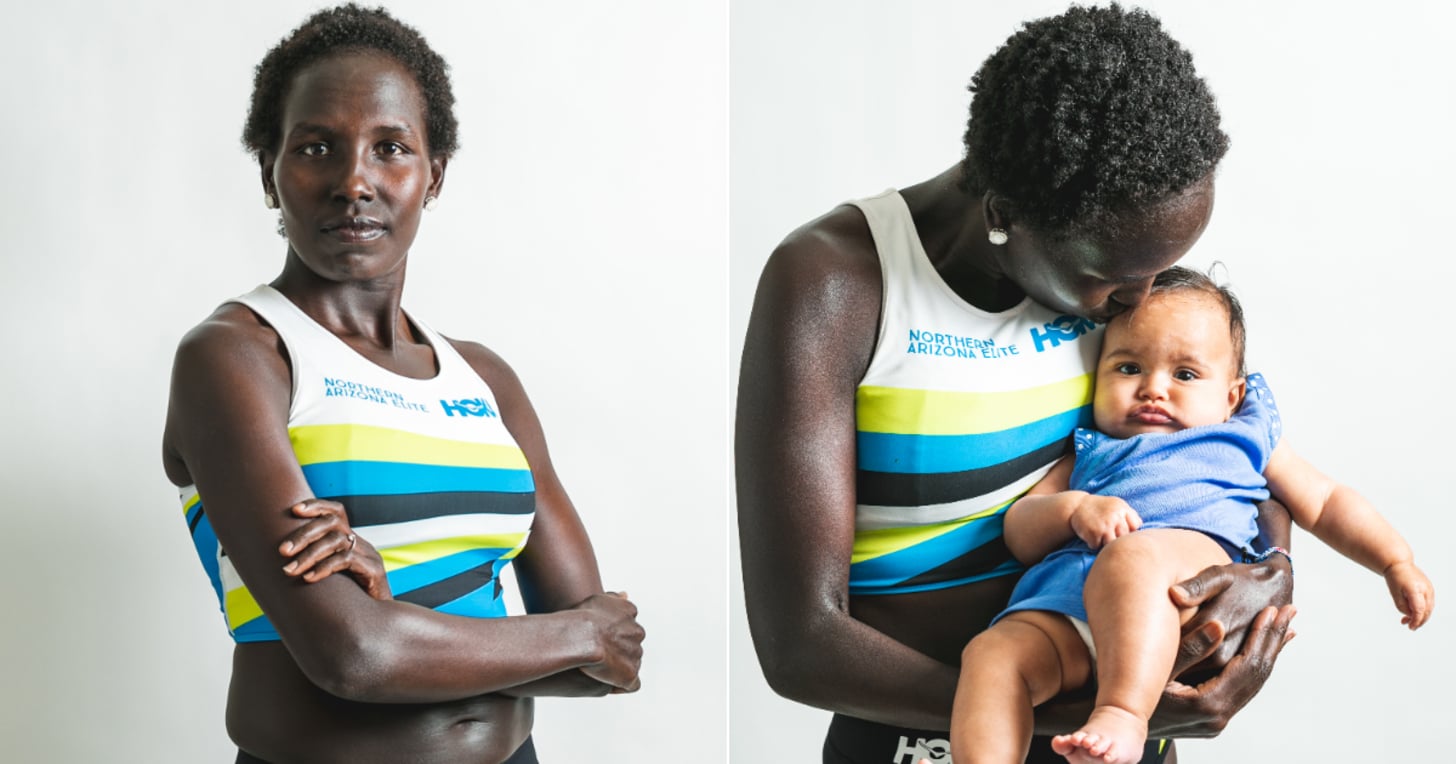 According to Tokyo-Games-bound long-distance runner Aliphine Tuliamuk, nothing is harder than 50 hours of labor — not any of the 26.2-mile races she's ever done. "At least I know where the finish line is during a marathon," she told POPSUGAR via email. Tuliamuk, whose daughter Zoe was born in January, requested that her baby accompany her to Sapporo, Japan, for the Olympic marathon event, but was originally denied. Up until recently, breastfeeding athletes were not permitted to bring their children to the Olympics. The organizing committee reversed their stance on nursing babies attending the Games as of June 30; however, Tuliamuk hasn't officially confirmed that partner Tim Gannon and Zoe will be making the trip. In theory, though, it's great news.

Tuliamuk, who won the US Olympic Marathon Trials last year in Atlanta with a time of 2:27:23 compared to her personal best of 2:26:50, told POPSUGAR she feels a newfound strength from motherhood that is "hard to put into words." She added that she's sure other parents know what she's talking about.

Zoe's middle name, Cherotich, which means "the cows are coming home after grazing" in Pokot, is an ode to Tuliamuk's Kenyan roots. Tuliamuk grew up as one of 32 siblings in the village of Posoy. She left the comfort of home to run track at Iowa State University before transferring to Wichita State University and graduating with a degree in public health science. This made her the first woman from her village to get a college degree, and she said the COVID-19 pandemic reinforced her plan to attend nursing school in the future.

"I was very aggressive as a younger runner. The only thought that went through my mind was to run faster than everyone else," the 32-year-old said. However, she thinks the marathon event has matured her approach to running, meaning she races against the course first and foremost, and when the race progresses, only then does she start to focus on her competitors.

Tuliamuk, a member of the NAZ Elite training group sponsored by Hoka One One, looked up to Kenya's Tegla Loroupe, the first African woman to win a major marathon, when she was a junior runner. Since turning pro in 2013, Tuliamuk has idolized Eritrea-born American marathoner and Olympian Meb Keflezighi. She also admires athletes Alysia Montaño, Kara Goucher, Allyson Felix, and NAZ Elite teammates Stephanie Bruce and Kellyn Taylor — they're all mothers.

Related:
Inspiration by the Mile: Sika Henry Became the First Black Pro Woman Triathlete in the US

Tuliamuk said that when she's in Sapporo, "it will be because Hoka believed in me and because my teammates embraced me and were committed to my success." Heading into the Olympics, she's continuing to increase her mileage and incorporate weightlifting sessions. She'll zone in on tougher workouts and said coach Ben Rosario is flexible and "creative," constantly adapting her training. She just competed in the Peachtree Road Race on July 4, where she finished in sixth place.

As one of the first Black women to represent the US in the Olympic marathon — the other is third-place Olympic Trials finisher Sally Kipyego — Tuliamuk said, "I hope that I can serve as a positive example, and I am honored to be viewed as a role model." She further told NBC Sports's On Her Turf in April, "You cannot aspire to something that you can't see. There's a lot of Black girls that probably watch the Olympics, but they watch the 100 meters and the field events, because that is where they see Black athletes. But in the marathon, they've never seen a Black person do it [while] representing the US." She added, "Now that Sally and I are going, hopefully those kids can watch us and start dreaming, too."