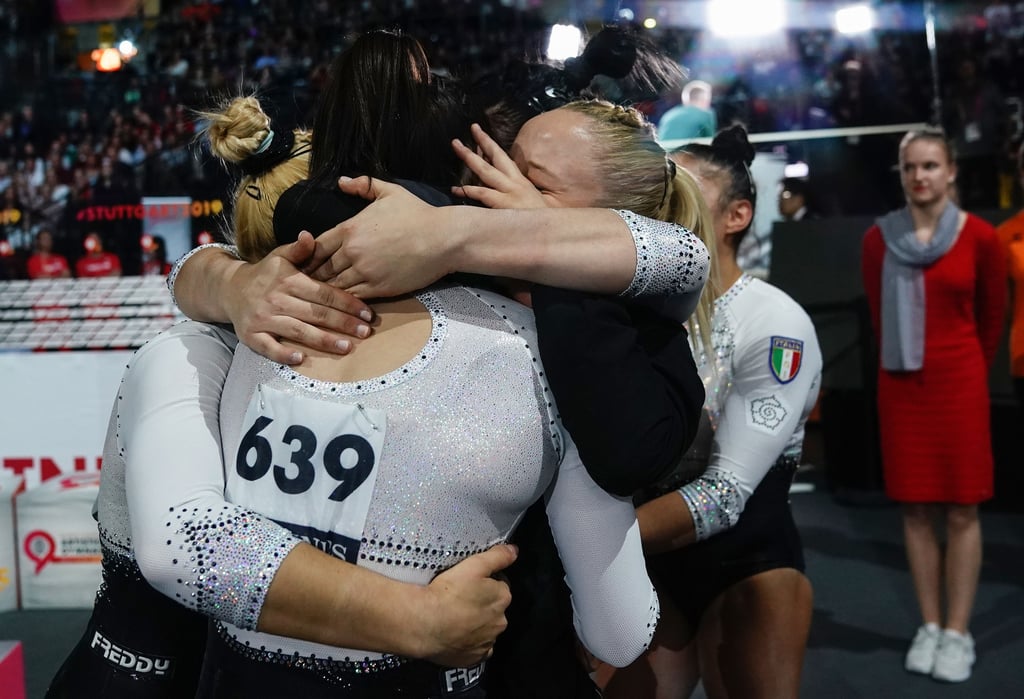 On Oct. 8, the US women locked down gold at the team final of the 2019 World Gymnastics Championships. It was their fifth consecutive victory and their seventh overall. They finished with a 172.330, nearly six points above Russia, the second place team who totaled 166.529. But no one could deny that the most memorable celebrations from the event took place during the last rotation when the Italians realized they'd won bronze. Their third place finish marked the first time the women's team received a World medal in 69 years.

The last time — and only time — the Italian women's team received a World team medal in gymnastics was in 1950, when they got bronze at the World Championships in Basel, Switzerland. The 2019 team consisted of Desiree Carofiglio, Alice D'Amato, Asia D'Amato (they're twins!), Elisa Iorio, and Giorgia Villa. And, for all of them but Desiree, it was their first World Championship appearance on the senior level.

Italy had made it into the team final by getting eighth place in the qualifying round of Worlds — the top eight teams advanced through to the final. And, they also qualified for Tokyo 2020 with their performance (US, Russia, and China already qualified for the Olympics after finishing first, second, and third at 2018 Worlds; the top nine teams that didn't qualify last year, qualified this year).

Giorgia, the 2018 Youth Olympic Games all-around gold medalist, told the Olympic Channel, "It was really emotional making the top eight teams. We came into the competition with courage to do better than in qualifying." She further explained to FIG that they didn't have any expectations going into the final, just to perform well. "Routine after routine, our score was getting closer to the podium," Giorgia said. And, despite a fall from Elisa on beam that threatened their top-three spot, they managed to land a bronze medal above China. Ahead, check out the amazing pictures that truly speak for themselves.

Related:
Here's Why People Are Saying Simone Biles Is Being Penalized For Doing Hard Skills
Previous Next Start Slideshow
WorkoutsGymnasticsAthletes

Sports
Women Race-Car Drivers Are Asking F1, "When Is the Sport Going to Be Ready For Us?"
by Mara Santilli 14 hours ago