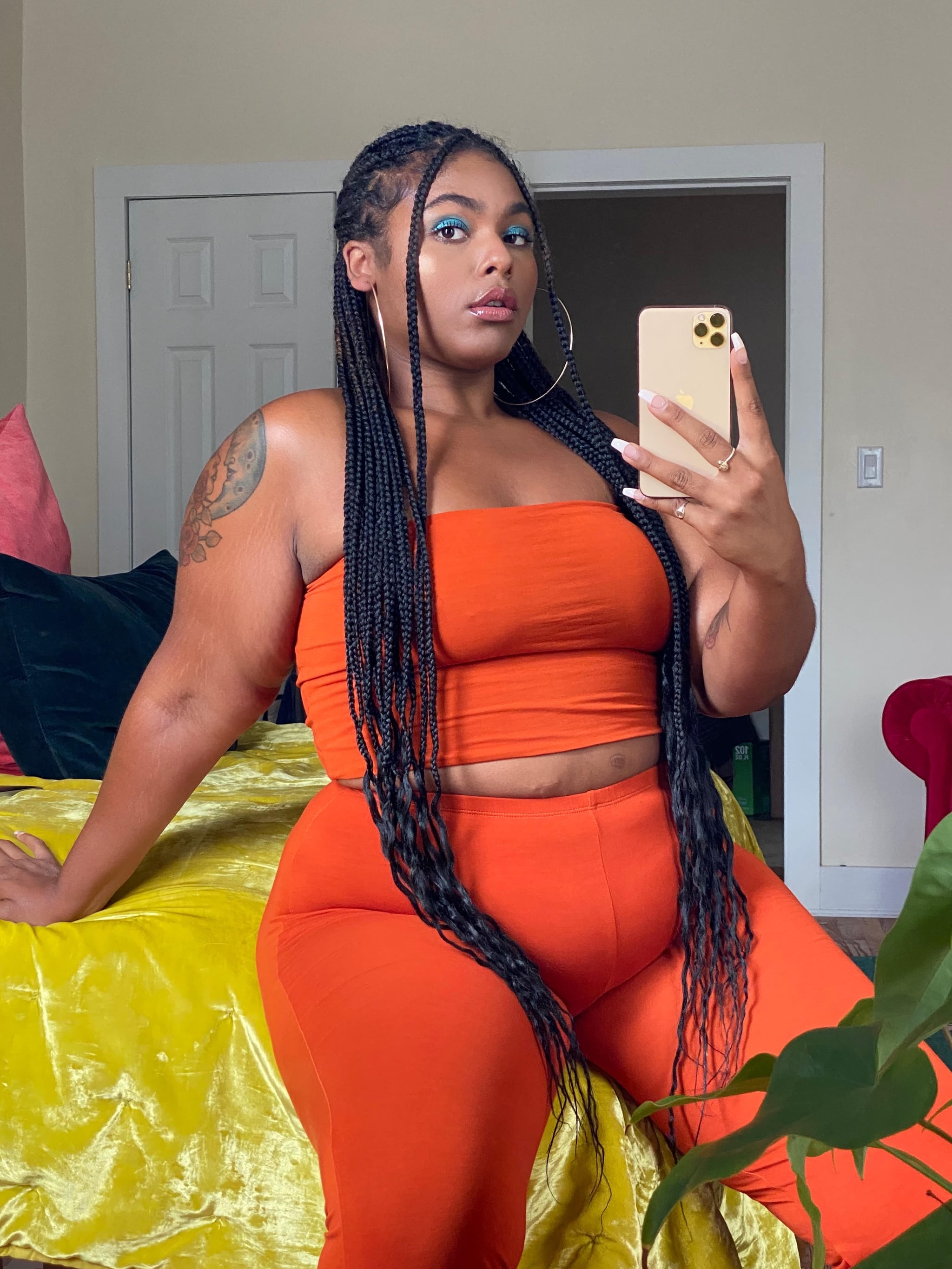 Kendra Austin, a 26-year-old curve model, wants to talk to you about fatphobia. "Fatphobia is the social stigma and consequential systemic oppression of visibly fat people," she told POPSUGAR. "The consequences of such stigma ranges from being bullied on playgrounds, in workplaces, and on dating apps to having health concerns ignored by doctors and fatality."

Austin said that if you've grown up as a fat child, you've grown up with fatphobia. "You most likely became the 'funny' or 'smart' friend in order to deflect and prove you were useful for consuming so much physical space," she said. "You probably were ashamed of eating in front of people who think fat people are gluttonous, so you did so in privacy and shame. You probably started dieting very early knowing that fat people are simply not desired or loved the same ways."

Austin noted that "microaggressions and heavy bullying toward fat people on the stereotypes that we are lazy, undesirable, desperate, gluttonous, and excessive are just skimming the surface of how deeply traumatizing fatphobia is." But, in a video posted to TikTok in the beginning of August, seen below, Austin said that we should not consider "fat" to be an offensive term. It's not one, she said.

"Fatness and beauty can actually exist in the same person, whether you believe it or not," Austin said in the TikTok. "The implication that it can't is actually deeply rooted in fatphobia, which is even further rooted in white supremacy."

Austin explained to POPSUGAR that if we consider the ways in which "food deserts occur, who our healthcare system regularly fails, and the pervasiveness of classism and its foundation of institutionalized racism and white supremacy, we can draw very simple and clear causation between fatphobia and white supremacy."

Austin recommends reading Fearing the Black Body: The Racial Origins of Fat Phobia by Sabrina Strings, PhD, assistant professor of sociology at the University of California, Irvine. Through Strings's research for her book, she identified that fatphobia has ties all the way back to the slave trade when eating and body size became characteristics of racial identity to differentiate between who were slaves and who were free.

As Strings explained to NPR in July, it was easy to make distinctions between the races in the beginning of the slave trade, "but, as you might imagine, after 200 years of living in close proximity, skin color really no longer works as a mechanism because now we have all of the people who we would consider today to be biracial." Racist attitudes around body size, Strings argues, still exist today. Hear Strings talk more about this to NPR here, and see Austin further discuss white supremacy and fatphobia in this video.

Related:
6 Important Reasons You Should Never Compliment Someone on Losing Weight

How We Can Shift Our Mindset Around the Word "Fat"

The only people who can reclaim the word "fat" are the people whom it was used against in an oppressive and negative way, Austin said. "I have always thought it was laughable when bullies come straight for the fat joke or slur," she explained. "Fat is not even top 100 of the worst things you can call a human being. That's how I understood that the word could be reclaimed, because the word itself is not the issue, it's the false sense that it's the worst thing we can call someone, when it is not even close."

Austin continued, "What about character? Where are our priorities? I don't want to hear 'No, you're not' when I call myself fat. I am fat." Another thing? Austin doesn't want to see people who do not identify as fat calling themselves or others fat. "The word is not for you and perpetuates dysmorphia when coming from those of thin privilege," Austin concluded.

To separate herself from fatphobia, Austin cleansed her social media space. It now includes almost exclusively other fat or plus-size creators, which changed her perspective. "We all agree that fatness is not our problem," she stated. "Fatphobia is."

Wellness
My Wellness Manifesto? Learn How to Choose Yourself
by Fariha Róisín 20 hours ago

Identity
Y Ahora? Where Is The Cast Of Nickelodeon's "Taina"?
by Cristina Escobar 1 day ago