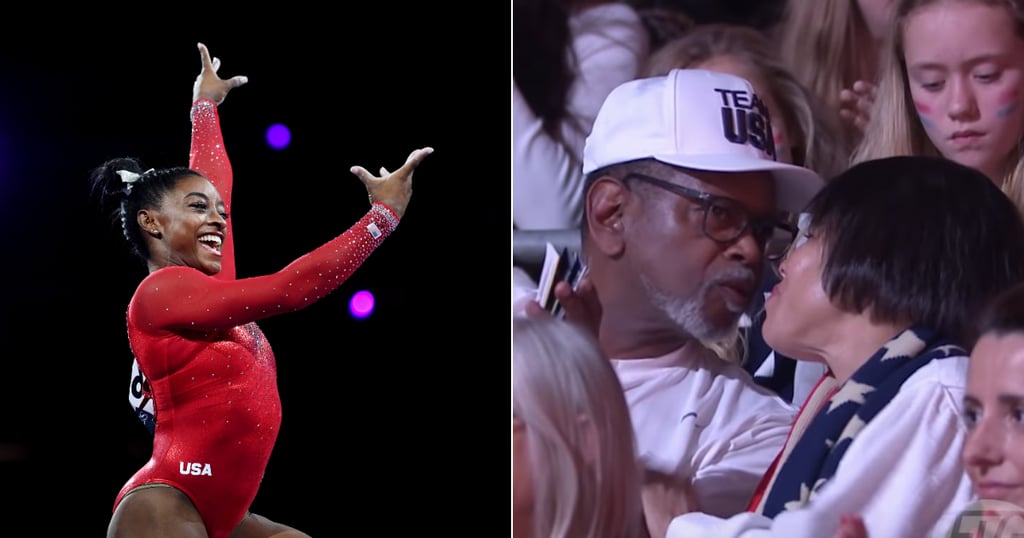 Over the past six years, every time Simone Biles has vied for an all-around title in a competition, she's won. Just this week in Stuttgart, Germany, she earned her fifth World all-around gold medal, beating her own record set at the 2018 World Championships. On Oct. 12, she racked up a victory in the vault finals, tying the record for most decorated gymnast in World Championships history (23) and increasing her incredible (and also record-setting) World gold medal count to 17. On Oct. 13, in the last competition at 2019 Worlds, she officially broke that record by placing on the podium in the beam (and then floor!) final. Simone's parents have been among the crowd through it all, cheering her on, and their blatant enthusiasm for their daughter deems to be another highlight of this year's World Championships.

Ron and Nellie Biles adopted Simone and her younger sister after the siblings were in the foster care system. Simone's biological mother struggled with drug and alcohol abuse issues, so Ron and Nellie — who were Simone's grandparents — adopted her to become her legal parents. "It was comfortable. It was family," Ron said in a documentary about Simone's life. "Just one big happy family." You can watch a video detailing this adoption story here. Just like her boyfriend, Simone's parents are part of her support system, people she can rely on when she's having a hard time mentally.

"I am a basket case inside at all of her competitions," Nellie told Glamour back when Simone had just returned from winning five medals (four golds) at the 2016 Rio Olympic Games. But Nellie and Ron are always there to see their daughter do what she does best, and we learned that they actually have a ritual of sorts during competitions. Nellie reportedly gives Ron a kiss whenever Simone hits a routine (in other words, when she does it to the best of her ability). Simone is very consistent in her execution, so they most likely share a kiss after the majority of her routines.

Following day one of the event finals, NBC asked Simone, "I don't know if you feel the pressure from your father, but he knows he gets a kiss from your mom every time that you hit a routine. Do you feel that pressure having to be cupid out there as well?" Simone answered with a laugh, "No, not necessarily. If I stay in bounds I think that's what makes him the happiest, so fingers crossed that I can make him happy on floor tomorrow." Simone can often step out of bounds on floor when she's tumbling — which equals one-tenth of a point deduction if one foot goes out and three-tenths of a point deduction if both feet go out — due to her extreme power. (Note: Simone stepped out of bounds in the all-around finals, and Ron still got his celebratory smooch!) Ahead, watch some of the times Simone's parents celebrated their daughter's powerhouse performances with a quick (and adorable) kiss. We can't get enough of the love!