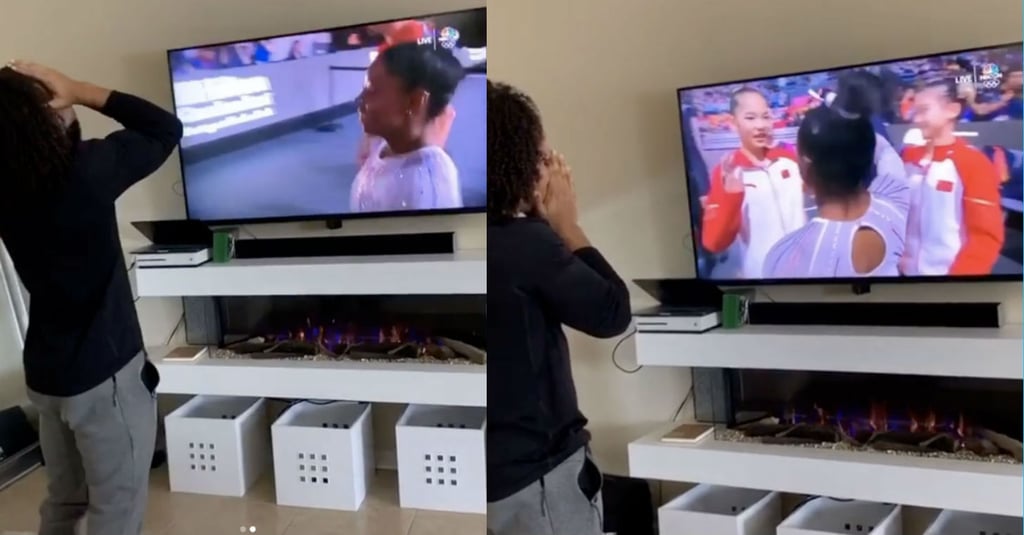 On Oct. 10, Simone Biles won her record fifth World Championship all-around gold medal. She ended with a floor routine full of her famous moves — the new Biles II, which is a triple-double, and The Biles, a double layout with a half twist — and, the best part, a pretend mic drop. It was after this routine that Simone found out she added one more medal to her gymnastics resume, and her boyfriend, Stacey Ervin Jr., was over-the-moon excited.

In a video posted on social media (that you can check out ahead), Stacey is seen rooting for Simone, whom he's been dating for more than two years. You can just feel his love and genuine pride — and if all of the jumping and clapping wasn't enough, you can see he's getting emotional, too. We don't blame him; if our other half just broke her own record and was en route to making history yet again, we'd feel and act the same way. "MY WOMAN IS A 5x WORLD CHAMPION IN THE ALL-AROUND & I COULDN'T BE MORE PROUD," he wrote on Instagram in all-caps. "I get hyped every time I watch her do her thing & today was no exception. Congratulation, babe! The whole world is proud of you!"

Stacey is a former US national gymnastics team member and competed in college for the University of Michigan. He had a short stint in the WWE and now is venturing into the health and fitness industry. Keep reading for a glimpse into Stacey's support for Simone, the five-time Olympic medalist with record after record under her belt. Most encouraging and loyal boyfriend award? Yeah, we'd give him gold.