Jennifer Lopez and Alex Rodriguez have been dating since March, and the two don't seem to be slowing down any time soon. They made their red carpet debut at the Met Gala in May and have already gone on a self-dubbed "baecation" in Paris. The couple have even been spotted multiple times wearing matching outfits. Is there any bigger sign that these two are smitten?

After news broke that J Lo and ARod started dating, the two have publicly spoken about their relationship on multiple occasions. Alex, particularly, can't stop gushing about his leading lady, and we don't blame him — it's Jennifer freaking Lopez! 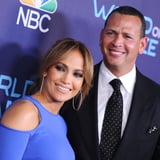