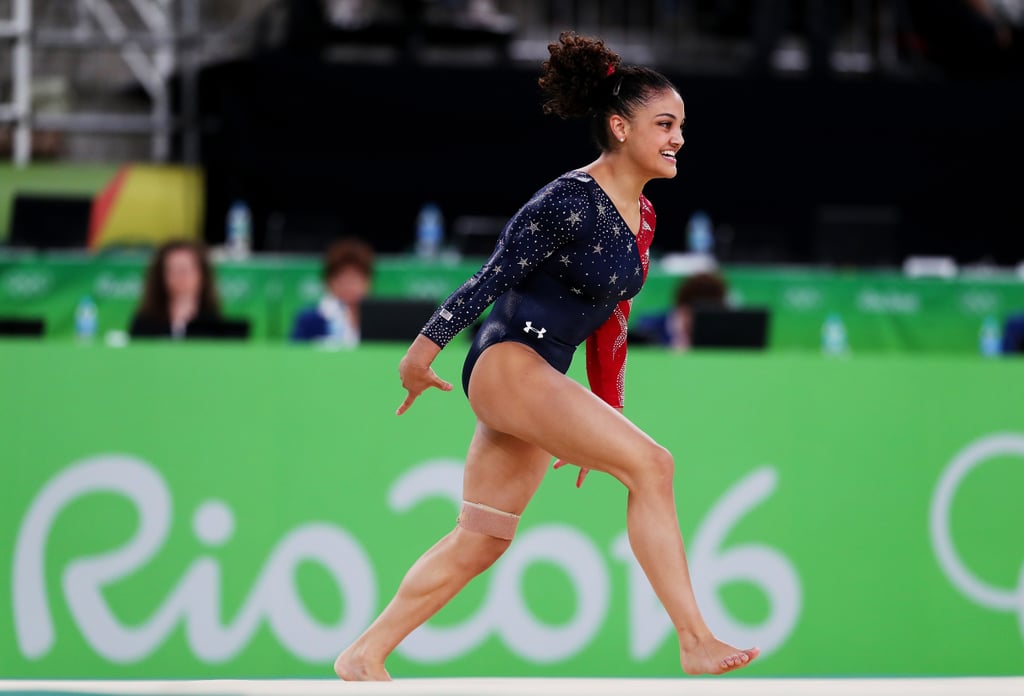 If you found success doing what you loved and then took a two-year break, would you return to that same path, or pack up your things and find a new passion? For gymnast Laurie Hernandez, a member of the "Final Five" at the 2016 Rio Games, there was no question. She'd hit the pause button on her gymnastics career after earning a gold medal in Rio's team competition and a silver on beam. During her down time, she published a book, won Dancing With the Stars, and cohosted American Ninja Warrior. Two years went by and Laurie missed the sport, so she decided to get back to training in the hopes of making that 2020 Olympic team.

Laurie told POPSUGAR ahead of a gymnastics class associated with her Alcon Dailies Total1 contact lenses partnership that she trains in the gym (gym meaning gymnastics facility) about four hours per day, six days a week. Five of those days are spent at her gym in California, and the sixth is either spent at a friend's gym for a shorter workout, or she'll do kickboxing or yoga. One of her favorite home workouts is, in fact, HIIT (high-intensity interval training).

"There are a lot of good HIIT workouts that I've learned recently," Laurie said, naming Centr, an app by Chris Hemsworth, as a place she goes to frequently for HIIT. Sometimes she'll do them before practice. "If I'm too tired to leave my house because I know I'm about to do a four-hour gymnastics workout, I'll do a workout at home. It's really helpful because it keeps your heart rate moving, it gets your muscles ready for the workout that you're going to do later on, and it's also really good cardio because that's something we have to build for the main season."

Ahead, check out three of Laurie's favorite moves to do during HIIT sessions at home. If you're looking for a full workout, check out this 15-minute bodyweight HIIT routine as well as this list of 20 more HIIT sessions you can do right in your living room.

Related:
I Did Gymnastics For the First Time in 5 Years and Remembered How It Felt to Conquer My Fears
Previous Next Start Slideshow
Olympic Gymnast Laurie Hernandez Shares Her Favorite HIIT Exercises to Do at Home originally posted on POPSUGAR Fitness
WorkoutsBodyweight ExercisesHIITGymnasticsAthletes