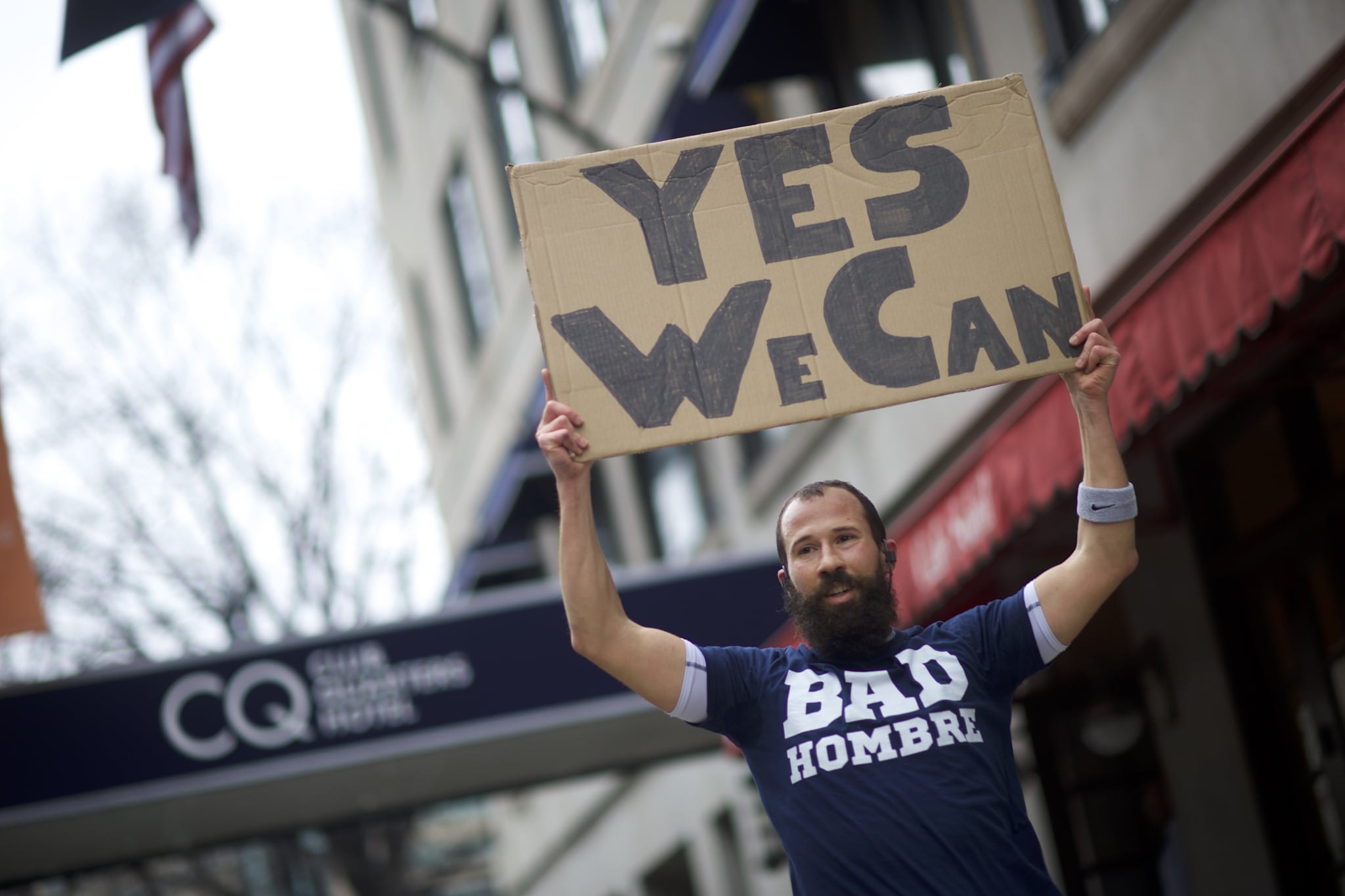 Women's rights under the Trump administration are under threat in many ways. And while women have been fighting back, the burden of resistance should not rest solely on their shoulders. How can male feminists and allies support women under this administration, beyond making symbolic gestures? Let's examine the possibilities.

How Are Women Under Threat in the Trump Era?

Donald Trump's surprise election as president of the United States was initially experienced as a setback for feminism. The idea that this woefully unqualified male candidate was elected over Hillary Clinton, an extremely qualified politician who would have been the nation's first female president, reminded many women that the glass ceiling remains firmly in place. What's worse, Trump was elected despite his blatant misogyny, most clearly on display in the now infamous Access Hollywood tape.

Now, more than seven months after Trump was sworn into office, it's clear that women's rights are in real danger. The Trump-supported American Health Care Act, which was mercifully pulled on March 24, threatened to strip away basic health care for women by no longer requiring insurance companies to cover essentials like birth control, maternity care, and mammograms. Meanwhile, the Senate confirmed the nomination of Neil Gorsuch to the Supreme Court, a conservative judge for whom women's rights are far from a priority. (And his vice president Mike Pence is no better on that front.)

The fact is, Trump's cabinet consists overwhelmingly of white men who have so far displayed a lack of empathy and knowledge in making decisions about women's issues. As Dr. Charmaine Nelson, a professor of art history at McGill University and expert on feminism and race relations, told POPSUGAR in an email: "Until such time as men have uteruses, vaginas, menstrual cycles, and pregnancies, and until such time as they are the main targets of sexual violence, assault, rape, and sexist bullying, women should be at the forefront in creating policies and programs about the health and well-being of our bodies."

How Have Feminists Fought Back So Far?

The feminist movement has responded to these attacks by striking back in spectacular ways. The Women's March on Jan. 21 drew out millions of women and allies across the country to protest against the new president. And the highly anticipated Day Without a Woman event on March 8 raised awareness about women's roles in the economy and in society by encouraging them to go on strike or protest in other ways. People have also shown their support by donating to women's organizations; in one highly publicized case, Planned Parenthood received tens of thousands of dollars in donations from people in VP Mike Pence's name as a form of tongue-in-cheek protest. Additionally, there has been an unprecedented surge in women interested in running for office, with thousands of women reaching out to Democrat associations like Emily's List and Run for Something, which encourage women and millennials to get involved politically.

How Can Men Help?

As empowering and invigorating as these events have been, questions still remain: What now? How can women maintain the resistance day to day? One obvious part of the answer is that they cannot and should not do it alone: men need to join in the fight. One of the most powerful ways they can accomplish this, beyond taking part in protests, is to create a climate that validates and normalizes feminism. But this sometimes requires a delicate balance and awareness of the situation. Here are a few guidelines men can follow in order to become more efficient allies within the every day.

1. Learn to listen — and don't hog the spotlight

A Saturday Night Live sketch perfectly illustrated how well-meaning male feminists can overshadow women, even as they try to defend them. The self-deprecating skit featured two male members of the cast (who claimed to have written the bit) deploring how women in modern society are subjected to injustices like daily harassment and unequal pay. Meanwhile, the female cast members were relegated to the background, left to nod in agreement and thank the men for their support.

Speaking up for women can sometimes lead to drowning out their voices with self-aggrandizing pontificating. Often, it's best to cede the floor and just listen. "Being an ally sometimes means speaking up and 'having someone's back,'" said Dr. Nelson, "and it also means shutting up and knowing when it is not your turn to speak, because you have spoken first, already, or enough. Being an ally also means knowing when and how to listen, really listen." For instance, this means letting women take the floor during work meetings instead of interrupting them or taking credit for their ideas. It also means refraining from "mansplaining" to them.

2. Pay attention and point out injustices at every level

Of course, listening to women doesn't have to mean sitting back and failing to speak up about injustice. Men should add their voices when it can make a difference and when women are being clearly ignored or overpowered by an oppressive majority. "Room needs to be made for our voices, thoughts, and opinions, not merely in the streets through protest (although such movements can be pivotal), but in the boardrooms, offices, parliamentary halls, West Wing, and Senate floors," said Dr. Nelson

Spotting instances of sexism requires constant vigilance, and engaging with feminist issues on a
daily basis, not just during special events like the Women's March. It means speaking up about these issues in every context and situation that you notice, whether it's on the street, in the workplace, or within a national debate. Men can accomplish this in myriad ways, from standing up against street harassment, to publicly demonstrating how sexism is at work in the media. The key is to remain aware.

3. Take a stand, even if it might cost you

One reason even well-intentioned men can falter when it comes to being an ally is that there seems to be little personal incentive for them to do so (although in reality, there are plenty of self-serving reasons they should support the women's movement). When Western society overwhelmingly favors your gender, it can take a concerted effort and awareness to muster up a desire to affect change — especially when this can mean making personal sacrifices.

Take the Women's March. The day after the event, the New York Times published an article about a town in New Jersey where fathers "had to" take care of kids by themselves over the weekend while the women took part in the march. The article was widely derided by the media, including by other Times writers, for its tone-deaf assumption that child care is primarily a woman's responsibility. Sadly, it remains a reality that women continue to take on a larger part of the burden of running a household, despite the fact that more women have jobs outside the home. Domestic tasks are one area in which men can try to support women more by taking on more responsibilities on an everyday basis, not just for exceptional events.

Some, however, believe that men taking on their fair share of responsibilities is not sufficient, and that, in some cases, actual sacrifice may be necessary. For example, according to Dr. Nelson, being a true ally can sometimes mean taking a career hit, voluntarily stepping down in order to make room for others. "Being an ally, of women or of Indigenous people or people of color, means working to create spaces for these under-represented constituents, not just to be present, but to be heard, to be empowered as equals at the decision-making table," said Dr. Nelson. "This also means that white men must be willing to decline the offer (job, taskforce, cabinet post, etc.) because they know that a more qualified female, or black, etc. candidate exists."

If that sounds hard, that's because it is. The idea that white men should set their own advancement aside in order to level the playing field for someone who is just as qualified, but less visible due to gender or color, will inevitably be seen by some as radical. But as one man recently discovered when he started signing his work emails with his female colleague's name, women's professional lives are filled with hurdles that force them to work harder than men just to achieve similar results. Being an ally means helping women get what they deserve — even if it can cost you part of your privilege.