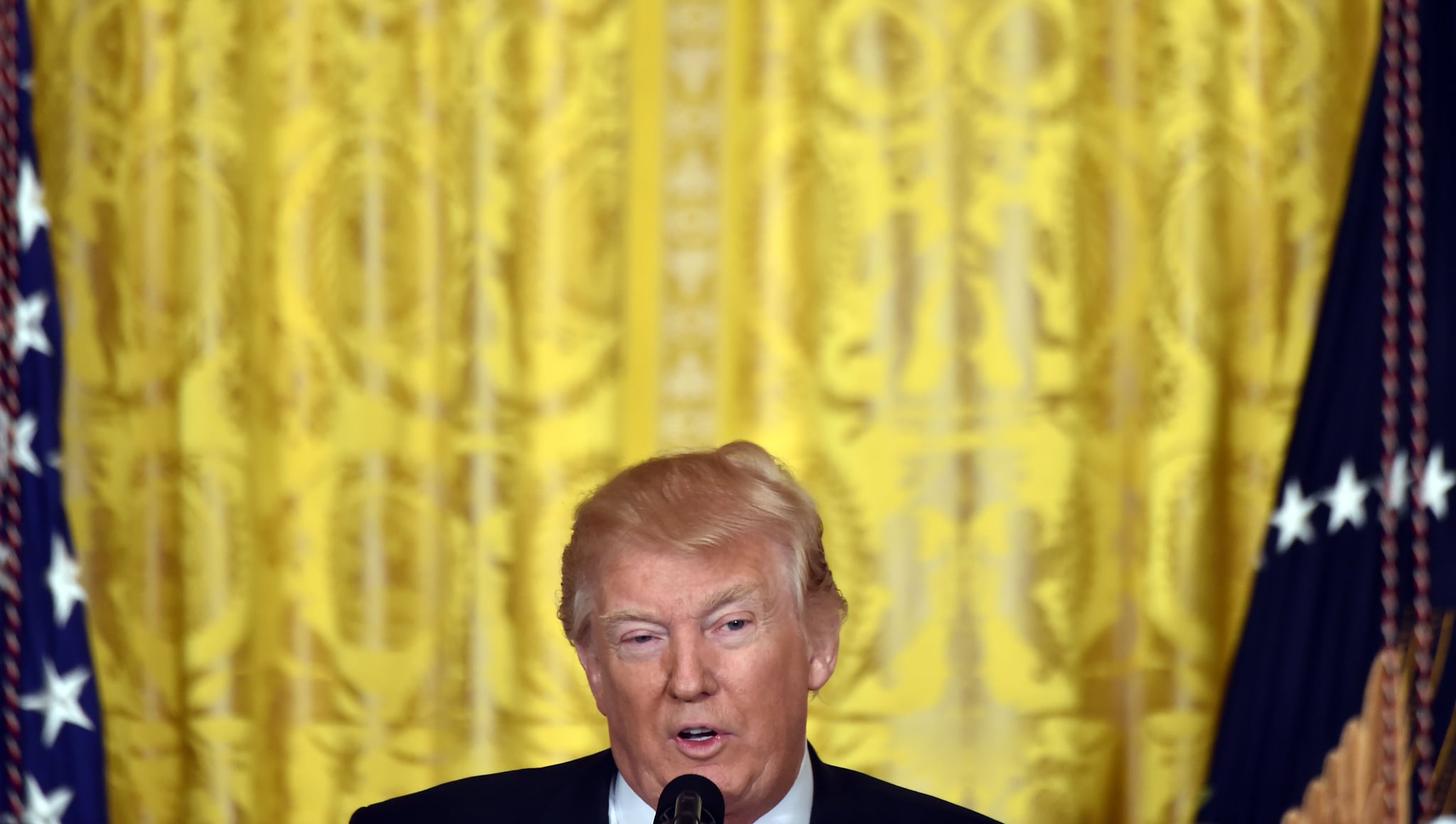 President Donald Trump held his first solo press conference since taking office on Thursday, Feb. 16, and surprise: it was a nightmare. Peddling one lie after another, Trump blasted the press and defended his administration's competency. Trump also brought up Hillary Clinton several times, as if he was still campaigning against her.

The entire press conference seemed more like an episode of The Apprentice rather than a presidential address, and here are 16 moments to prove it.

1. He falsely asserted the number of Electoral College votes he won.

Also brags about "massive crowds" at a rally that hasn't happened yet.

2. When pressed about the false Electoral College numbers, he blamed someone else by saying he was "given that information."

.@PeterAlexander asks about this falsehood. Trump's response: "I was given that information, I don't know." https://t.co/ZwCE8NWQOK

Trump clarifies on Flynn: "He's fired for what he said to Mike Pence. Very simple."

On firing Gen Flynn, Pres says he didn't tell VP about calls to Russian Ambassador or didnt remember "and that's not just acceptable to me."

4. He criticized leaks related to the Flynn controversy while maintaining that Hillary Clinton's leaked emails were OK because they were not classified, although some of them were.

Trump criticizes the leaks from his own administration, defends WikiLeaks posting hacked Clinton emails because they weren't classified.

5. He dodged a question about Russia by asking why the press hadn't covered how Clinton received a debate question beforehand.

Pres Trump again cites incident of CNN debate questions being given to @HillaryClinton. Doesn't think it got enough press coverage.

5. He lambasted the press for reporting fake news, again, and claimed the leaks about his campaign advisers having communication with Russians during the election were "real," but the news was "fake."

"The leaks are real but the news about them is fake."
- The President of the United States

Straight from the pages of George Orwell

Trump on reports citing leaks; "The press should be ashamed of itself"

6. He continued to demonstrate his obsession with ratings and cable news.

Trump: "I'm really not a bad person...I do get good ratings, you have to admit that." pic.twitter.com/Vv0w1uEcyN

7. He said drugs were becoming "cheaper than candy bars."

Trump thinks drugs are cheaper than candy bars because he thinks candy bars cost $100, the smallest denomination of cash he acknowledges

8. He claimed his administration was run like a "fine-tuned machine."

"this is a fine-tuned machine" pic.twitter.com/Rq7ECFKmyi

9. He asserted that Clinton was closer to Russian officials than he was, described how you can do "bad things" with uranium, and mused about bombing a Russian ship that was spotted off the US coast.

Here is Donald Trump talking about the uranium. pic.twitter.com/crp7WzEbVp

This is probably my favorite part so far pic.twitter.com/n61y5I8UrN

10. He said he was having a great time during the press conference and declared he wasn't "ranting" or "raving," although that's how the press would spin it.

11. He boasted Melania as a "great advocate" for "women's difficulties" and mentioned Ivanka in the question about Melania.

Pres. Trump on Melania: "She's gonna be a fantastic First Lady. She's going to be a tremendous representative of women and of the people." pic.twitter.com/fe7rv0XnWX

Trump says Melania cares very much about women's issues, and "women's difficulties." What??

Asked about Melania, he works it around to Ivanka

12. He maintained his claim that the travel ban's rollout was "smooth."

"We had a very smooth roll out of the travel ban." -@POTUS pic.twitter.com/S2y9rSUM71

13. He tried to silence a reporter for asking a question about the rise of anti-Semitism and said it was insulting.

Trump says a question from a reporter for a Jewish publication about rising anti-Semitism is "not a fair question."

Then tells him to "sit down." https://t.co/Tbb0iMpeAo

14. He suggested that he "inherited" a mess from Barack Obama without acknowledging that America is actually thriving.

Trump says he inherited a mess. Strange, because this is the economy Obama left him: pic.twitter.com/fjXndqyX4Q

15. He asked April Ryan, a black journalist, if she could set up a meeting between him and the Congressional Black Caucus.

Here is the video of this ridiculous, outrageous interaction.pic.twitter.com/4wfdJ9p0tv

"I can't believe I'm saying I'm a politician but I guess that's what I am now." —The president of the United States, everybody