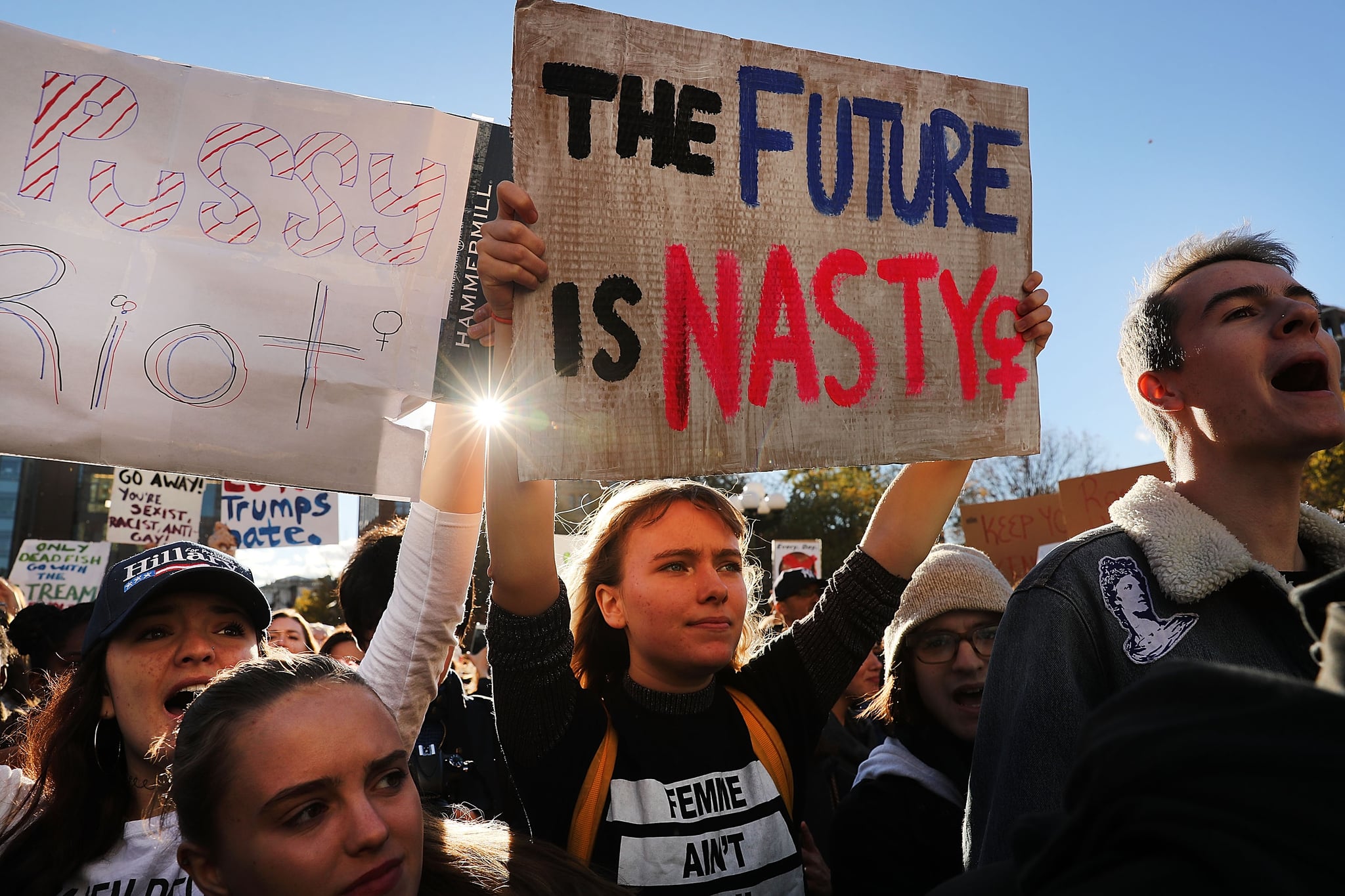 When I think about my New Year's resolutions, I want them to be aspirational but also achievable — bite-size ways of improving my life month over month. I have the usual points on my list, like exercise more, eat healthier, save more money, and so on. But I have the overwhelming feeling that 2017 isn't going to be a usual year — and my usual resolutions aren't gonna cut it.

When Donald Trump won the election in November, it felt like everything I had worked for, in my personal and professional life, came crashing down. It took me a solid two days of mourning before I decided to stop being sad and to get to work. I texted some of my closest friends, the same ones who had been going through play-by-plays with me over the election for months, and the feeling was unanimous: now is the time to work harder.

Related:
Nasty Women of America Are About to Get a Whole Lot Nastier

And just as we mobilized — joining Facebook groups to discuss radical action, reaching out to family members to explain why we needed to rethink minority and women's rights before Trump took office, donating to charities and groups doing crucial work — the rest of the country was doing the same.

"We are seeing all over the country that people who were voters who maybe never took political action or joined a protest before [are becoming] really active based on the election," Jessica Morales Rocketto, former digital organizing director for Hillary For America, told me during a phone call a month after the election. "And we're going to see more of that."

"We are confronted with the question of how to move forward in the face of national and international concern and fear."

Indeed, after the reality of an impending Trump presidency set in, activists announced the Women's March on Washington would be taking place Jan. 21, the day after the Inauguration Ceremony. They invited everyone who believes in protecting of the safety and health of all citizens, regardless of gender, race, ability, religion, or sexuality. National organizers for the March released a statement in which they outlined the goals of the event.

"The rhetoric of the past election cycle has insulted, demonized, and threatened many of us . . . We are confronted with the question of how to move forward in the face of national and international concern and fear," they wrote.

"The Women's March on Washington will send a bold message to our new administration on their first day in office, and to the world that women's rights are human rights. We stand together, recognizing that defending the most marginalized among us is defending all of us." Nearly 200,000 people are predicted to attend.

Related:
How You Can Support the Women's March on Washington Even If You Don't Live in DC

And on Jan. 14, immigration rights groups are joining together to protest deportations and the criminalization of immigrants. They'll be holding events the week before the inauguration to stand against Trump's policies.

Americans are also voting with their dollars, with a record level of donations to Planned Parenthood this year. The women's health network has reportedly received more than 315,000 donations since Trump won the election. Upwards of 82,000 of those were made in Vice President-elect Mike Pence's name to protest his antiabortion platform.

Nonviolent protest has quickly become language opposition and will be a major medium of communication for year ahead. Under "be more organized" on my list of resolutions, I wrote "join more protests."

Marching in the streets or standing for all-night vigils isn't always the right option.

But marching in the streets or standing for all-night vigils isn't always the right option. Rocketto, who worked for Hillary For America, suggests focusing on an even more local level.

"It's the kind of change we can start to build up and the kind of power that will actually make our lives better. I'm really focused on making the next 10 blocks around me better."

For Rocketto, it's about getting more fresh produce in her Brooklyn neighborhood grocery stores. For me, it's going to be about ensuring women around me have access to safe spaces to discuss and share. Policy changes are going to happen around us, and for the most part despite our protests, but we can take a DIY approach to taking care of those in our community.

True progress comes through a multifaceted method. Pressuring your congressional representatives through emails and phone calls is one example, said Rocketto.

Destiny Lopez agrees. The codirector of All* Above All — an abortion rights group focused on repealing the Hyde Amendment that forbids certain federal funds from covering abortion — says 2017 is going to be the year about educating ourselves and not letting politicians get away with laws that hurt women.

"Trump and Pence and antiabortion leadership in Congress really want to make it impossible to get an abortion, and they want to penalize women for having children," she said over the phone. "One way or another, women are going to be punished."

Related:
Are Abortion and Other Reproductive Rights in Jeopardy Under President Trump?

Lopez believes there are three crucial things everyone needs to do this year: 1. Educate ourselves on the issues by reading more and discussing with others. 2. Be vigilant about local and state politics. And 3. Keep an eye at the federal level on how legislation is being made.

Congress especially, she says, is going to be crucial in blocking Trump this year. Be ready to contact your Congressional representatives and even show up at their office to speak to them personally about your feelings.

4,500 women around the country signed up to run for office since the election.

Pretty soon, more of those Congressional representatives might be women. She Should Run, an organization that gives women the resources they need to run for office, reported that 4,500 women around the country signed up to go into politics since the presidential election. Nasty women from 2016 are certainly becoming a force to be reckoned with.

We have much to do in the coming months to protect ourselves and the people around us. So donate to Planned Parenthood, which GOP leaders have promised to defund in the coming year; spend time improving your neighborhood; attend workshops on social activism; run for city council or local office; volunteer at an abortion clinic escort; and add a bullet point in your New Year's resolutions about joining the good fight.

Related:
9 Secrets to Getting Congress to Listen, Straight From Someone Who Worked There
Image Source: Getty / Spencer Platt
Politics2016 ElectionOpinionWomen's MarchUS News