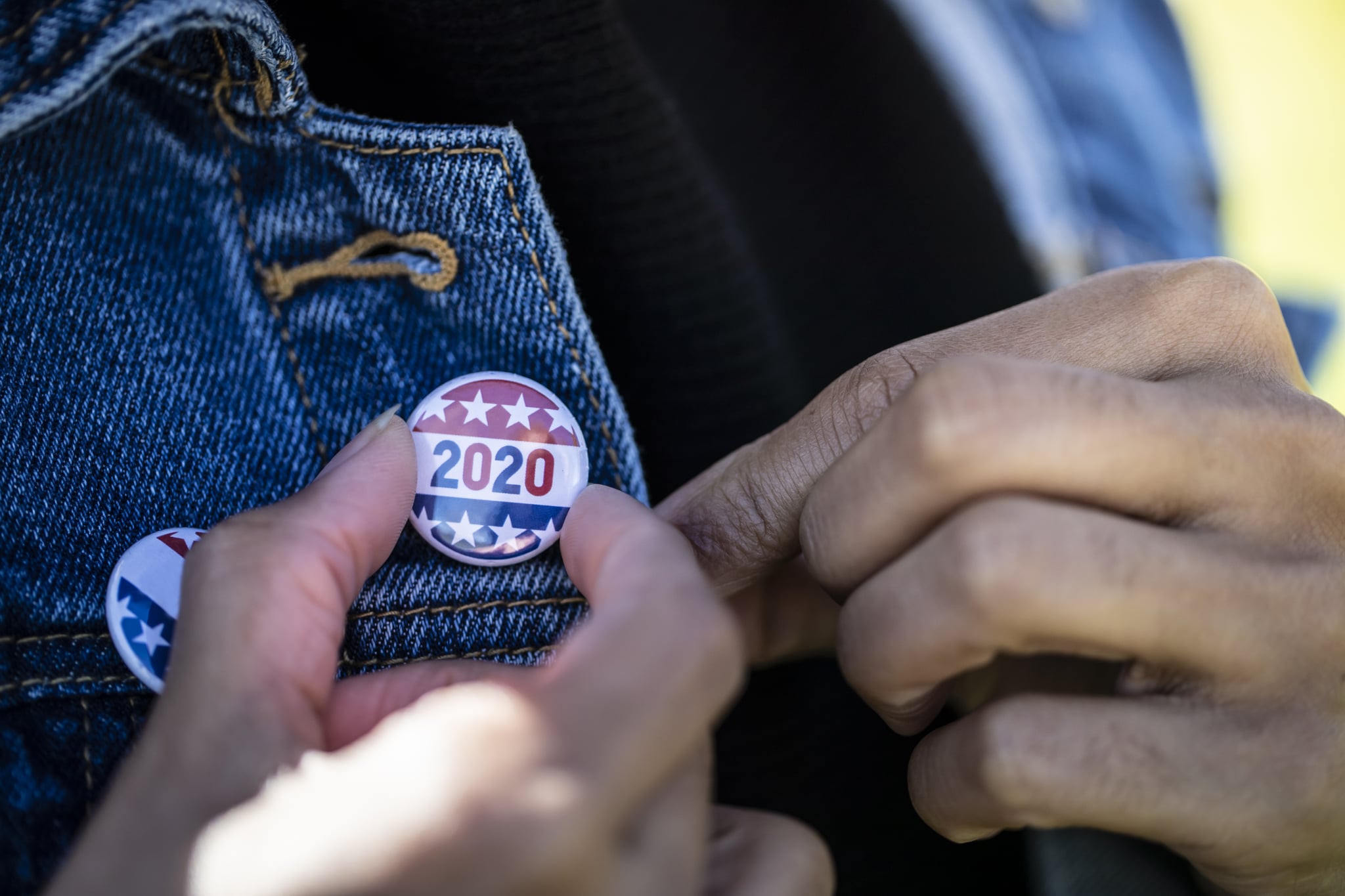 I've been waiting for this presidential election for a long time, and no, I don't mean for four years. I mean for almost 15 years, because that's how long it's taken me to get here. I became a US citizen with dual citizenship a year-and-a-half ago after moving here with my family from Canada in 2005, and the 2020 presidential election will be my first time voting in a presidential election in the US. Even just saying the words makes me giddy (who would've thought voting could give you butterflies, right?).

As a Canadian immigrant, a lot of people assume my transition to the US was a fairly easy one — but the reality is, it wasn't. My family moved here through my dad's work visa over 15 years ago, and it took us around 12 years of living as permanent residents to even qualify for the citizenship application. There were times the process was challenging, like when we weren't allowed to leave the US to visit our family, who all still live in Canada, without jeopardizing the whole application process and potentially not being allowed back into the country. Or when my brothers and I had to miss school for our green card interview, where we were taken into a separate room from our parents with a man who asked us questions like "Have your parents ever committed a crime?," "Have you ever committed a crime?," and "Have you ever been arrested?" I couldn't have been much more than 10 years old at the time.

I was constantly reminded that I didn't belong here, that I was different, and that I would never quite fit in.

But it wasn't just these events that made my time as an immigrant in America hard — it was everyday interactions I had with classmates, teachers, friends, and even strangers. For years I was bullied and taunted by classmates, and would be the butt of jokes at school for being Canadian. I was constantly reminded that I didn't belong here, that I was different, and that I would never quite fit in. As I got older, I'd hear people talk about how immigrants are taking all the jobs in America. In college, I even had someone I considered to be a very close friend tell me if I wasn't happy here, I should go back to where I came from.

I was left feeling like I didn't have a home for most of my life. I didn't feel welcomed in the place I grew up, but I couldn't go back to Canada because my life was here in the US. Growing up I've always had a different perspective from many others around me due to my upbringing, and it isolated me from a lot of people. Oftentimes, I truly felt silenced by people's anger and intolerance for anything different. I became afraid to speak my mind and felt like my views were automatically deemed invalid because I wasn't from this country.

Related:
Everything You Need to Know About the Voting Age — and the Movement to Lower It

It's a difficult experience moving to a new country, especially at a young age, and I know my experience was much easier compared to many others who have moved to the US. Still, it took me a long time to see my differences as a strength. I started to realize it was good that I had another perspective, not only because it was unique and my own, but because it meant that I could see things in a different light and could ask new questions. I began to feel proud of who I was and what I had gone through and started to speak my mind more, speak my truth, and stand up for what I believed in.

The more I spoke out, the louder I got, and I realized that I had been angry for a long time. How dare someone try and make me feel small because of where I'm from? How dare someone try to take my voice away? How dare someone criticize me for wanting to make my home a better place? My family and I chose to make this country our home, and I am choosing to stay and make it better because it's my country, too. That's why it was so disheartening in college, when I was still unable to vote as a permanent resident, to hear friends and other people on campus saying they weren't going to vote. When I'd ask people why they didn't plan on voting, they'd give an answer similar to "I don't like politics" or "It doesn't really affect me" or "One vote isn't going to make a difference". I was shocked, but more than that, I was confused and frustrated — didn't they know what kind of opportunity they had? Didn't they see how powerful of the gift voting can be? Why would you not use your voice to create positive and important change? That's when I started to realize that for many of us in this country, voting isn't a right, it's a privilege.

This election represents my voice, my value, and my worth in this country. It's about making impactful change for not only us, but also for future generations.

Research has found that Gen Z and millennials are the largest group of eligible voters for 2020, yet have voted at lower rates than other generations in years past. Trust me, I understand being frustrated by politicians and politics. I understand you can't always see how one decision affects you, and I can see why you think one vote doesn't really make that big of a difference in the grand scheme of things. But what if 100 people thought that? What if 1,000 people thought that? Voting is an incredible opportunity to influence the country and our communities, and it's something that so many of us have worked hard for.

This election is about more than just politics for me. It represents the culmination of years of work, struggle, doubt, triumph, loss, fear, revelation, joy, and so much more. This election represents my voice, my value, and my worth in this country. It's about making impactful change for not only us, but also for future generations. It's about using our power to take a stand for what we believe in and banding together to show others that despite the many challenges this year has brought, we do care about our country and we will not stop fighting for positive change.

So wherever you are, whoever you are, if you're able to this November (or sooner if you plan on using mail-in voting or absentee voting), take a stand and go out and vote!