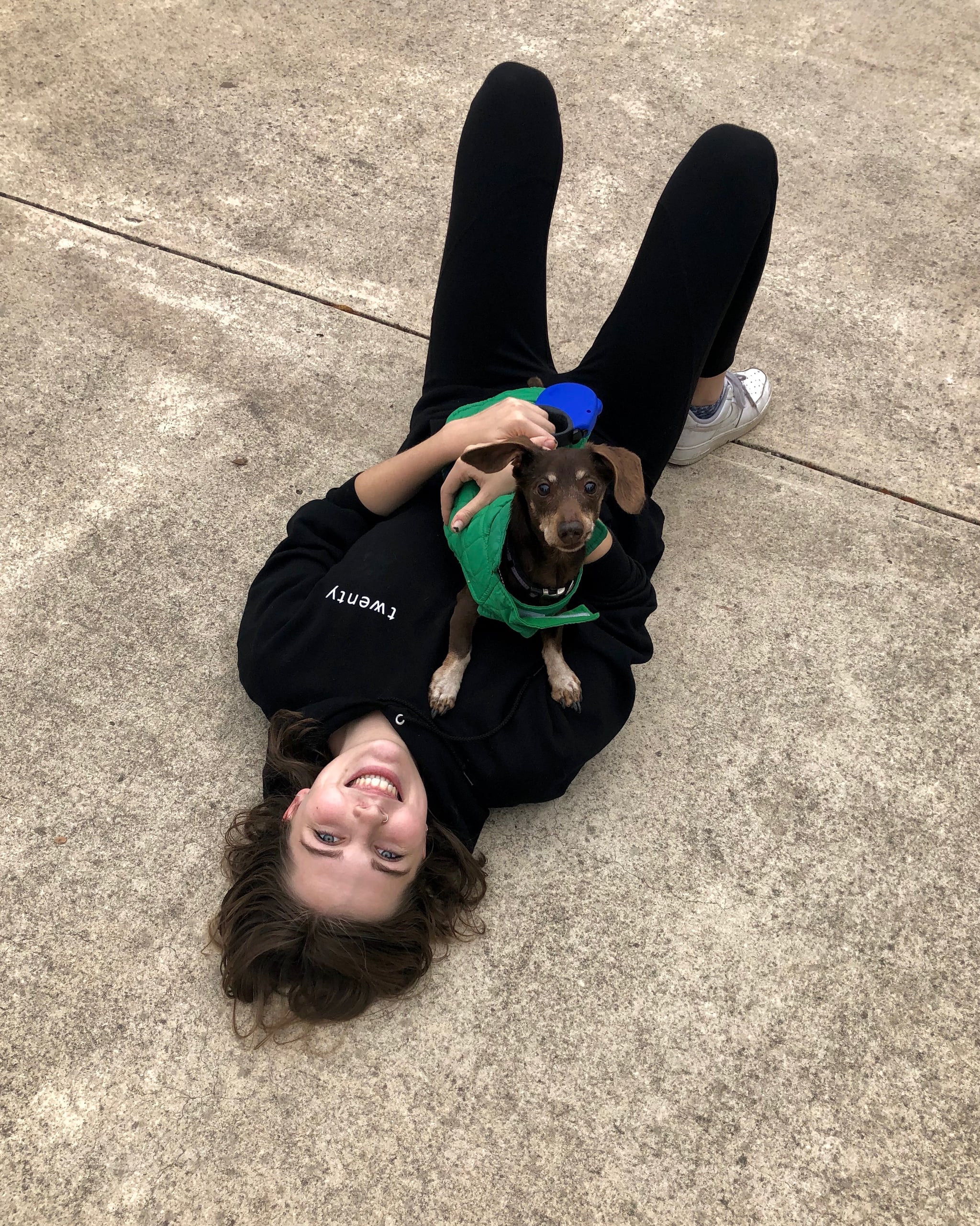 After being sent home from my study abroad program in Italy straight into quarantine at home in Texas, there wasn't a lot I was looking forward to. The only things I wanted to do were mope around and avoid doing my asynchronous online classes. But of course, that got old, and I got tired of being lazy. I tried going on walks alone around the neighborhood, but the days were hot, and I could only walk around the block so many times before getting bored of seeing the same houses each time. Now, it should have occurred to me sooner to take my dog on a walk, but Sputnik and I were never that close.

Sputnik is a miniature dachshund and gets all the exercise he could want running around in our backyard (not to mention he gets winded going around a single block, and I'd rather cuddle up with my cat instead), so my family rarely takes him for a walk. But there's something about staying in your house all day for weeks on end that I guess can bring a girl and her dog closer together. (Hallmark, I'm ready for my movie deal.)

Sputnik is just one of those dogs where when I look into his eyes, I know exactly what he's thinking. Sometimes, the way he looks at me, I can tell he's having real human thoughts in his tiny, little brain. Usually, it's that he wants the food off my plate, but as we spent more and more time together on the couch in the living room during shelter in place, staring at each other wondering what to do, I could tell he was thinking something a little different: that it would mean to world to him if I took him on a walk.

Related:
The Key to Keeping My Anxiety in Check Amid COVID-19? My 2 Dogs

I was reluctant (which I told him) because all he ever wants to do on a walk is sniff every rock and blade of grass in his path. He can't walk ten feet without stopping to smell a bush for a few minutes. I mean, I couldn't even go on my own non-stop walks during SIP without getting bored, and he wanted me to take him on a walk where I'd be standing there watching him sniff leaves half the time? Hard sell.

And yet, I was sold. His absolute excitement and pep in his step when I picked up his leash was a sun beam shining through the dark clouds of lockdown (if only there were dark clouds blocking the 90-degree Texas sun). And so, I began my month-long journey of dog walk enlightenment with Sputnik. The first walk was uneventful and boring as usual. I would let him sniff something for a few seconds, then drag him along to the next house to sniff something else, making it around the block at a steady pace. He was happy to be on a walk, but it must have been my lack of mental stimulation during shelter in place that made me realize the look in his eye saying it wasn't the most fulfilling walk he'd ever been on. Me neither, Sputnik.

With all the time to spare between my weekly Italian assignments I couldn't be doing in Italy, I decided the next day that, gosh darnit, I would let Sputnik sniff! Really, what would it hurt to stand there while he sniffed his nose dry in a stranger's front yard. With his usual pep in his step, we set off for his sniff-filled dream of a walk. It started slow as usual down our block, but as I let him smell and explore for however long he wanted, following along behind him, I could see just how interested he was in all our moderately pleasant neighborhood had to offer. With his retractable leash, I would let him run halfway onto neighbors' lawns, making sure he didn't get too wrapped up in any plants. I let him walk whichever way he wanted, even when we zigzagged across the street from house to house and down back alleyways between blocks.

Related:
I Live and Love Differently Because of the Lessons I've Learned From My Rescue Dog

With every walk, Sputnik ended up taking me a different route around the neighborhood. And I realized that I wasn't walking him anymore. He was walking me. Even then, we weren't just walking. We were exploring, something I had never thought I could do in my own neighborhood. 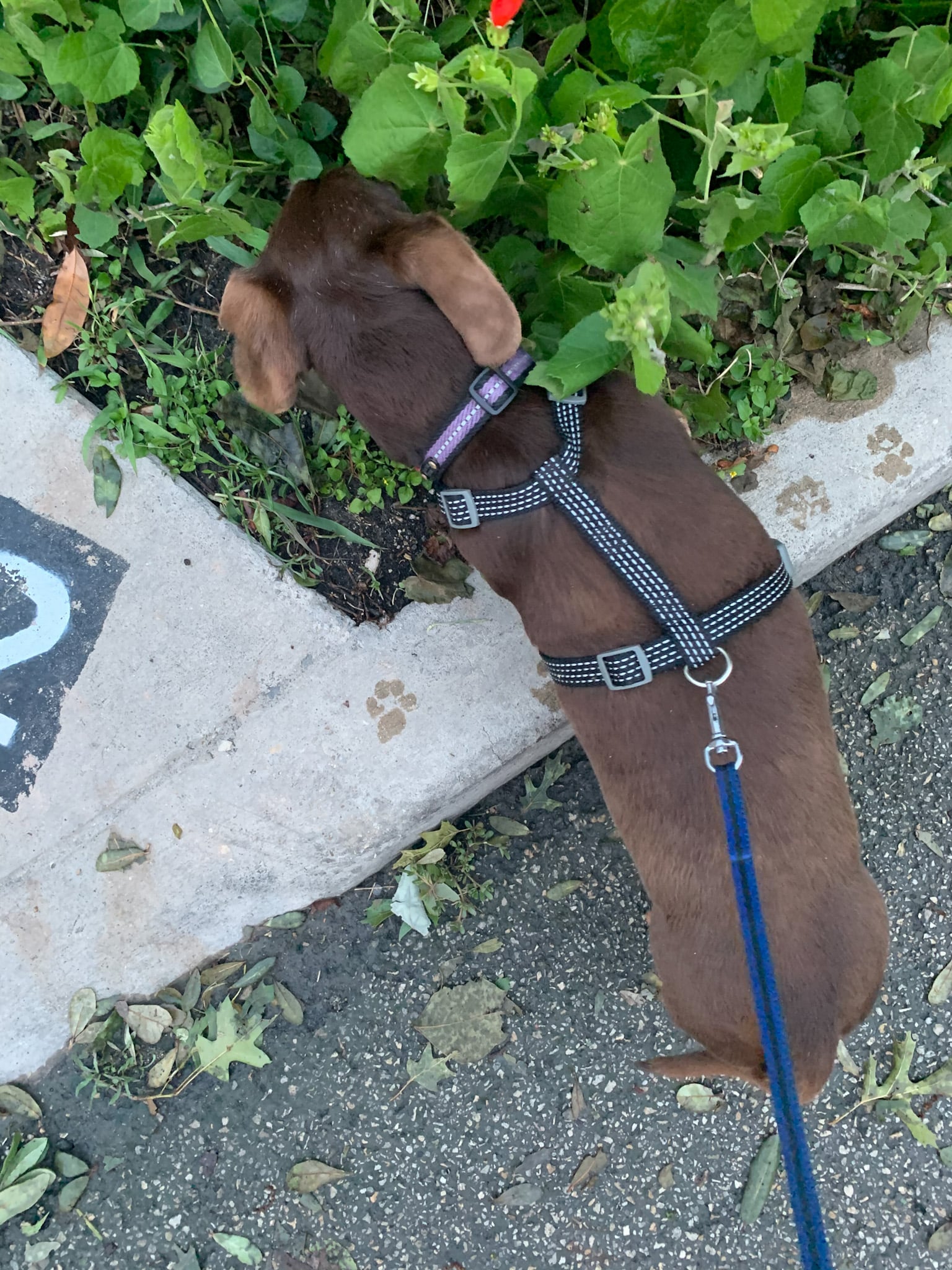 I thought I had seen all there was to see, on my own block at least. But with every sniff, Sputnik got me to look at the things I had never seen before. Beautiful architectural details he knew I would love, but only if I had taken the time to look out for them. (Also, staring at someone's house while walking a dog is much easier than standing alone staring at someone's house.) I noticed flowers I'd never seen, children's chalk drawings lining driveways, houseplants lining someone's kitchen windows — all things in life I love to admire and appreciate. I would have never had the patience on my own to slow down and really see all these things hadn't it been for Sputnik and his overly curious nose.

Sometimes Sputnik would just run as fast as a tiny wienie dog could. And, I mean, if I was gonna let him stop and sniff, I wasn't gonna stop him from running too. And so we'd run and run down the street, smiling and giggling together (I could see in his eyes he was giggling) until he caught a whiff of something interesting and took a few minutes to mosey on over.

I began look forward to those walks every evening. I would make dinner so I'd finish in time for Sputnik and I to walk during sunset. I didn't know there were so many palm trees in my neighborhood. Or that a house nearby had three identical Siamese cats that would lounge together on their front lawn. Or that there was a block I had never walked down lined with beautiful midcentury houses that I could then complain about to my parents about not living in. Or just that our neighborhood really wasn't as boring as I had thought. It's the little things like that that I never would have slowed down enough to find if Sputnik hadn't shown me how.

I've always loved to enjoy the little things in life, but I never slow down enough to see all the little things this world — including my neighborhood — has to offer. All it took was letting my dog take me for a walk and teach me to stop and literally smell the roses.

Summer
I Quit Tanning at the Peak of Summer, and Learned to Love My Skin
by Izzie Deibe 11 hours ago