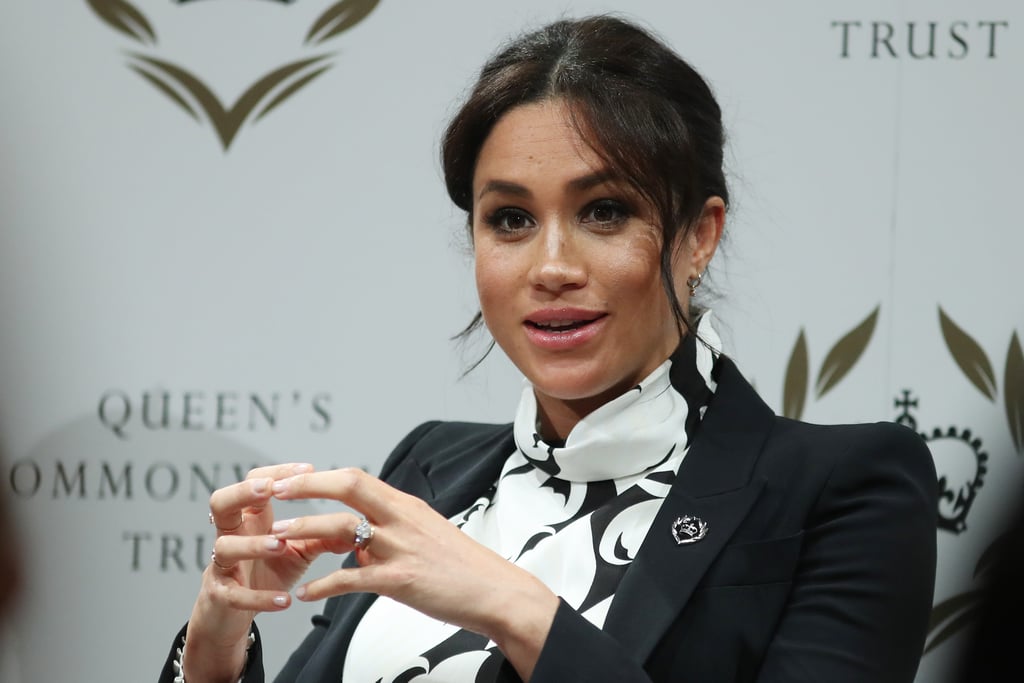 Meghan Markle was front and center for a panel discussion about women's issues at King's College in London on Friday, which also marked International Women's Day. The Duchess of Sussex joined fellow high-profile activists Annie Lennox, Adwoa Aboah, Julia Gillard, Chrisann Jarrett, and Angeline Murimirwa at the event, which was assembled by The Queen's Commonwealth Trust (of which Meghan was recently named vice president). During the chat, Meghan opened up about her history of altruism and philanthropy, retelling the story of how she influenced Proctor & Gamble to change their sexist advertising campaign as an 11-year-old.

"Truth be told, at 11 I don't think I even knew what sexism meant," Meghan told the crowd. "I just knew that something struck me internally that was telling me it was wrong." She went on to explain how the triumphant moment has impacted her adult life. "It really set up the trajectory for me to say, if there was a wrong, if there is a lack of justice, and there is an inequality, then someone needs to say something. And why not me?"

"Billions of dollars on the table are lost by girls being pulled out of education."

Meghan also explained how traveling the world with charitable organizations further opened up her eyes to the injustices and discrimination against women and girls globally. "Once I became old enough to travel, specifically to developing countries and see what was happening abroad, I think for me what really resonated was the lack of education for girls, and how that has a ripple effect on so many things," she said, citing the specific ways in which a lack of access to learning can affect girls, including early childhood marriage, susceptibility to trafficking, and modern-day slavery. "But equally look at all the positives that come out of it when you do have access to education for young girls . . . how it affects the economic development, the GDP. Billions of dollars on the table are lost by girls being pulled out of education."

This is far from the first time Meghan has spoken out about equal rights, feminism, or the importance of girls' education since becoming a member of the British royal family. Though she is expected to stay mum about most explicit political opinions, Meghan thankfully hasn't shied away from making her ethical priorities clear, whether in official speeches or just by the patronages she's chosen to take on. She stressed the significance of giving girls the "right tools to succeed" during an address in Fiji last year, and is currently working with organizations like The Association of Commonwealth Universities to decolonize education and make it easier for students from all backgrounds to have quality schooling. Most recently, during her tour of Morocco with Prince Harry, she visited classrooms and spoke to young women who are getting secondary schooling thanks to the country's efforts to promote education equality.

As Meghan gears up to go on maternity leave before the birth of her first (feminist) child, she left panel attendees with a reminder of her longtime dedication to helping others and trying to make the world a better place for women and girls. "It started at 11, but still feels like it's just beginning."

Prince Harry
Prince Harry Is Using the Proceeds From His Memoir to Make a $1.5 Million Donation
by Grayson Gilcrease 3 weeks ago