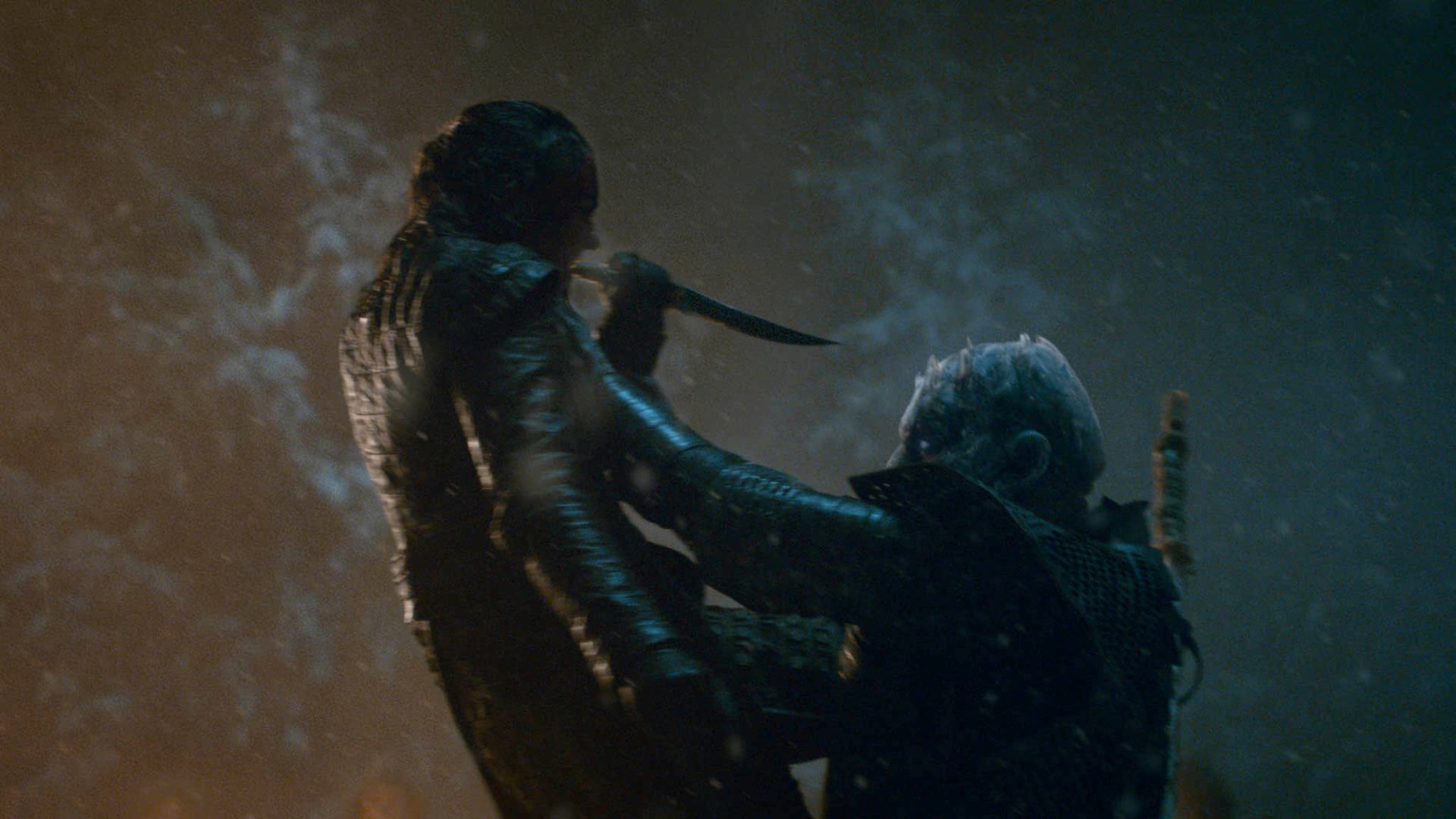 Warning — fire cannot kill a dragon, but spoilers can ruin your day. Proceed with caution!

Have you caught your breath from Sunday's tumultuous Game of Thrones episode? Season eight's third installment, "The Long Night," is dark (maybe a little too dark, literally), with a surprise around every corner — though nothing can quite top that finish. Not only do we witness some heartbreaking deaths, but Arya Stark turns up out of the blue to KO the biggest baddie of them all: the Night King. While we've seen her rack up an impressive kill count over the past few seasons, it's safe to say that this might be her greatest accomplishment yet. And if you really think about it, it's been hinted at for quite some time.

From her scrappy underdog beginnings to her ghastly training with the Faceless Men, Arya has basically been preparing for this moment since she leaves her home in Winterfell as a kid. And when she gets back to her home after her travels in season seven, the pieces really start coming together: most notably, she gains the weapons/skills she ultimately uses to kill the Night King. For those who aren't quite following, in season seven's fourth episode, Petyr Baelish gives Bran the Valyrian steel dagger that an assassin used when attempting to kill little Bran in season one. Bran immediately gives the dagger to Arya during their conversation with Sansa in the Godswood, telling her "it's wasted on a cripple." Boom — there's the first piece of the puzzle.

A little later, Arya and Brienne spar in Winterfell's courtyard as Podrick, Sansa, and Petyr watch. Despite Brienne's greater height and build, Arya quickly proves she can hold her own with a fight style more suited to her small and agile frame. When Brienne knocks Arya's sword out her hand and moves to strike her down, Arya draws out the catspaw dagger with her right hand and drops the blade into her left to hold it at the older warrior's throat. The sleight of hand forces a stalemate when it could have been a defeat. But why is this fight scene so important? Because Arya pulls the exact same move to kill the Night King!

Related:
If This Game of Thrones Theory Is True, Cersei Should Be Very Afraid of Arya Stark

When Arya appears from behind the Night King in the Godswood, the catspaw dagger is already in her left hand. The Night King immediately spins around to grab her by the throat in midair, holding her away and gripping her left wrist. But, using the same trick she used against Brienne, Arya drops the dagger and catches it with her right hand, swiftly thrusting the blade into the Night King's stomach and causing him to shatter instantly (along with all of his undead pals).

With one trick of the hand, Arya takes down the legend that Northerners have been whispering about for centuries. It's safe to say that Arya Stark has proven that her level in badass is certifiable. After all, who needs a prophecy when you have all those skills?