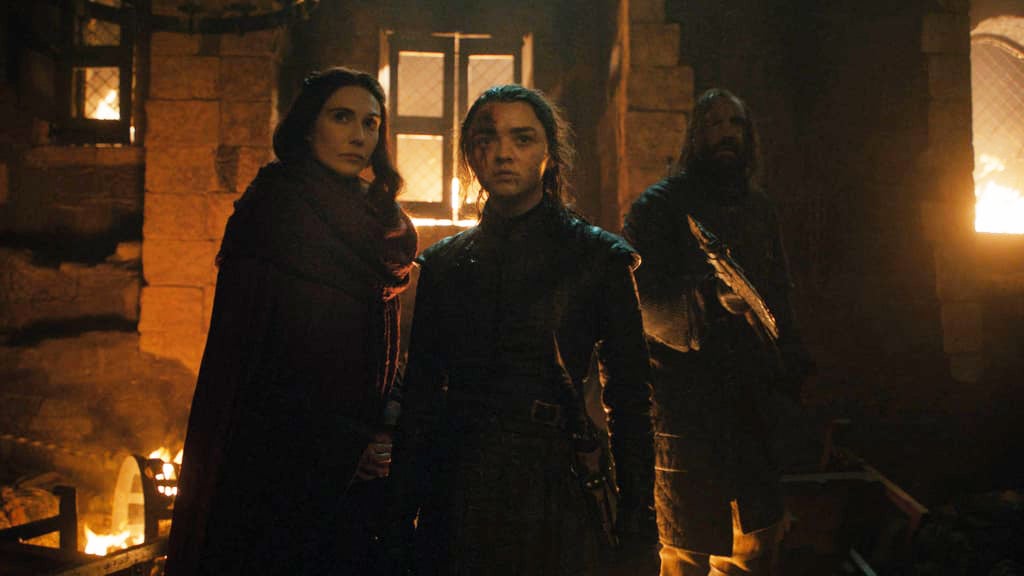 If This Game of Thrones Theory Is True, Cersei Should Be Very Afraid of Arya Stark

Warning: Game of Thrones fans know the night is dark and full of terrors, but this post is bright and filled with spoilers, so proceed with caution.

It's Arya Stark's world, and we're all just living in it. For as long as we remember, our weapon-wielding assassin has had a vengeance out for many people in the wide world of Game of Thrones — "Joffrey, Cersei, Walder Frey, Meryn Trant, Tywin Lannister, the Red Woman, Beric Dondarrion, Thoros of Myr, Ilyn Payne, the Mountain" — but now that she's taken down the Night King, and her list is shorter, we're almost certain she's coming for Cersei Lannister. While we shamelessly love theorizing all the ways that Cersei could go down and who will kill her, one moment between Arya and Melisandre points to the youngest Stark sister killing the Lannister queen.

During the insane Battle of Winterfell, Melisandre returns to the city where her deep conversation with Arya leads her to kill the Night King. "I know you," Arya says to the Red Woman after Beric's death. "You said we'd meet again. You said I'd shut many eyes forever. You were right about that, too." Melisandre repeats, "Brown eyes, green eyes, and blue eyes," before Arya darts away to check "blue eyes" off her agenda.

Related:
Game of Thrones: How Melisandre's Role as a Priestess Is Pivotal

Arya and Melisandre first met in season three, when Arya and Gendry are with the Brotherhood Without Banners. Before Melisandre trades gold for Gendry, she has a moment with a young Arya. "I see a darkness in you," Melisandre tells Arya. "And in that darkness, eyes staring back at me. Brown eyes, blue eyes, green eyes. Eyes you'll shut forever. We will meet again." And yes they did meet again!

The fierce Stark girl has killed many people throughout the series, and yes, they've had brown eyes (Walder Frey, Meryn Trant) and blue eyes (the Night King), so the person with green eyes still remains. Considering Cersei's hanging out in King's Landing with Euron Greyjoy while the rest of civilization defeats the Army of the Dead, Cersei is on a lot of people's kill lists. Not to mention, her heart still remains as cold as a White Walker's.

The season eight moment between Arya and Melisandre has fans thinking she'll be the one to take down Cersei with the green eyes. It's also interesting to point out that Daenerys Targaryen has green eyes as well, but we'd much rather see her take down the conniving Cersei. Ahead, see what fans are saying about Melisandre's comment to Arya.

Related:
Game of Thrones: 5 Huge Moments That Still Have Us Reeling From the Battle of Winterfell
Previous Next Start Slideshow
Game Of ThronesTVTheoriesTwitter Reactions
Around The Web

Netflix
Christian Serratos Brings Selena, the Woman Behind the Legend, to the Small Screen
by Mekishana Pierre 4 hours ago