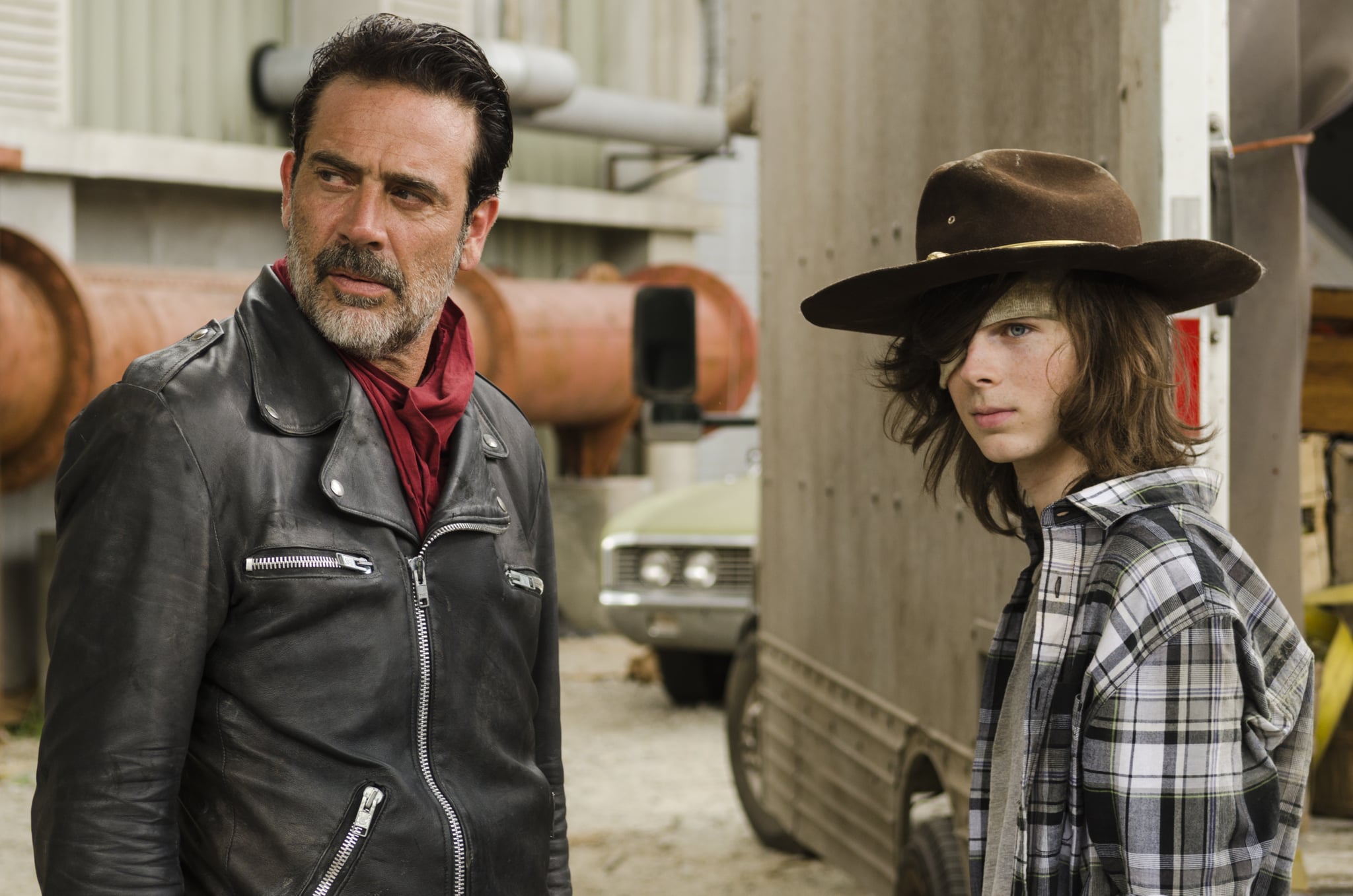 The latest episode of The Walking Dead finally took us back to Negan's camp and started the ball rolling on an important storyline from the comic books. As we see in the previous episode, Carl hides out in the back of a truck headed to The Sanctuary, and while the scene doesn't go down in exactly the same way on the show as it does in the books, it gets him close to Negan. Once he's there, he gains Negan's admiration by coming out shooting — literally shooting — people from the camp. Impressed with his boldness, Negan takes Carl under his wing for the day, showing him around the compound, introducing him to his various wives (in a psychologically horrifying scene), and forcing him to be present for a branding ceremony.

At one point, Negan sits down with Carl for a one-on-one talk, making him remove the bandage from his face, so he can see his hollowed-out eye socket. What a guy, right? Carl starts to cry, and before it gets too awkward, Negan softens. He drops the tough-guy act and apologizes to Carl, saying he's forgotten that Carl is a kid, since, you know, he's such a little serial killer and all. Negan makes Carl drive him back to Alexandria, where he shows himself around (don't even think about denying him that powdered lemonade) and holds baby Judith. Yeah, Rick isn't going to love that.

So, where is all this going? I'll tell you where.

As the story goes in the comics, Carl continues to voice his distaste for Negan, agreeing to Rick's plan to wage war against the Saviors. Rick's group and their allies defeat Negan, but Rick refuses to kill the villain. Even Carl insists that they need to kill him, but Rick pulls the "If we do it, we're worse than he is" card. Fast-forward to two years in the future. Carl is seen going into the basement of an unfamiliar house and telling a shadowy figure about his day. (He saw some boobs.) The man chats with him and tells him that he enjoys Carl's visits, that they help him keep track of the days. He then asks if Carl still wants to kill him, to which Carl replies, "Yes, Negan. You know I do."

What we see in "Sing Me a Song" is just the beginning of their story together, and while Carl never overcomes his bitter hatred of Negan, he does grow to see him as a confidant. Likewise, Negan has a respect for Carl that he doesn't have for anyone else in the Walking Dead universe. Of course, this is just the comic version. We'll have to wait and see how their friendship pans out on the show!