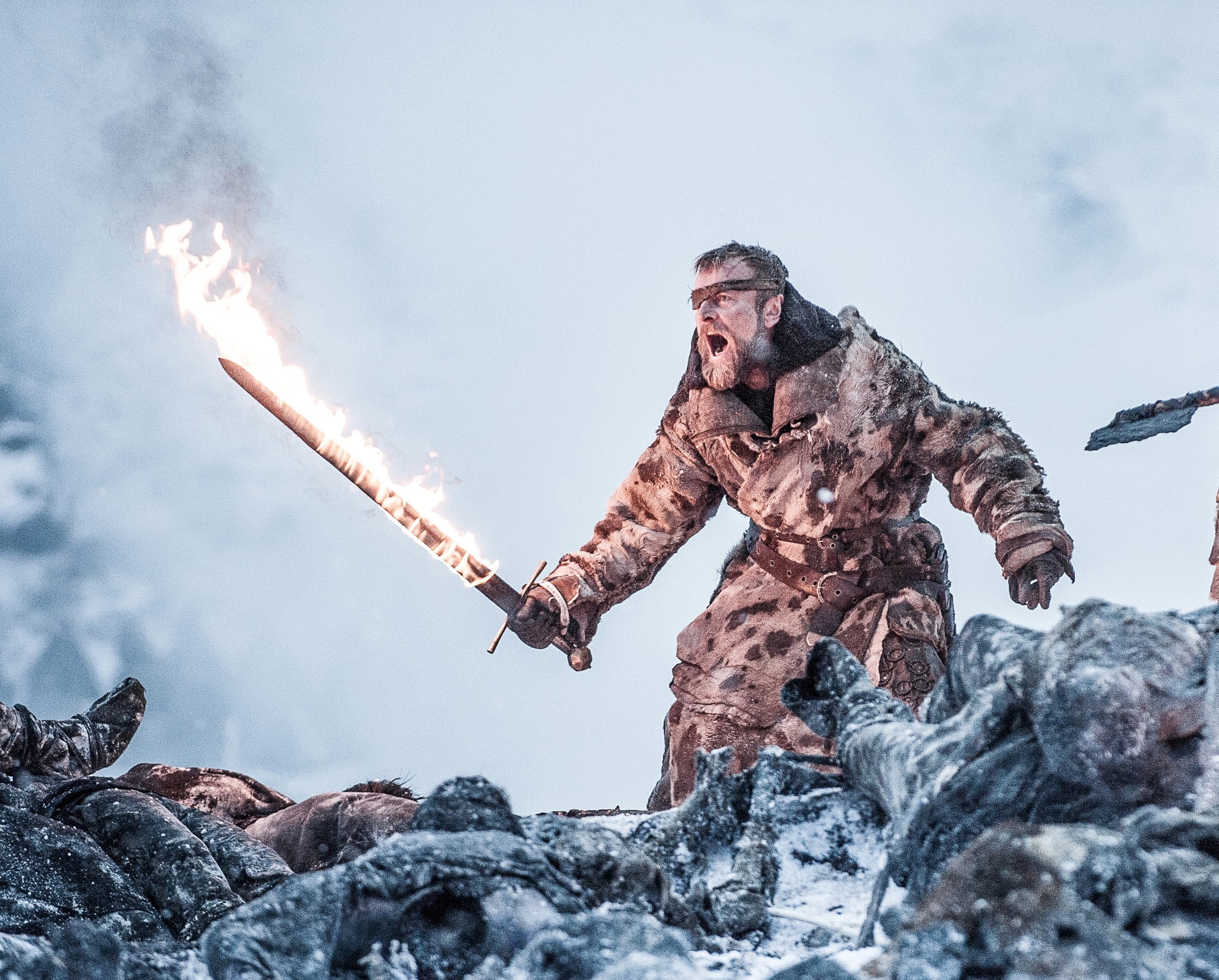 After months of teasing, Game of Thrones finally gave fans what they had been waiting for in "Beyond the Wall": more of Beric Dondarrion and his flaming sword of awesome. The knight who has been brought back from the dead six times hasn't been given a massive amount of screen time, but he's known for making every moment count. After all, it's kind of hard to miss a guy who wields a sword that is literally on fire. But what causes Beric's sword to flame? Azor Ahai is meant to possess a magical sword called Lightbringer, but according to the book series, it actually radiates light and heat at all times. Beric's sword is easily extinguished, which means it's unlikely to be the legendary Lightbringer. That doesn't mean what's fueling the flames is any less magical though.

The best place to find the answer to this mystery is in the text that inspires the series. Thoros of Myr, who brings Beric back to life each time he dies, is also capable of lighting his sword ablaze. However, he does it with a bit of trickery. It's explicitly stated in the books that he uses wildfire to pull off the effect. Melisandre likely does something similar in season two when she is trying to convince everyone that Stannis is Azor Ahai reborn by having him pull a sword from the fire. However, Beric doesn't use wildfire to create the flames that engulf his weapon, the power comes from within him.

His blood is the key. In the book A Storm of Swords, Beric cuts his hand in order to light his sword before engaging in trial by combat with The Hound, and he seems to use a similar technique on the show. He always runs the blade through his hand before it is set ablaze, and it's likely that he is actually cutting himself in the process. This could be a form of blood magic — the most effective and dangerous kind of magic — or it may be one of the Lord of Light's gifts.

In a recent interview with Time, George R.R. Martin revealed Beric is what is known as a fire wight. He's as undead as the White Walkers, but it's fire that keeps him alive, not ice. According to Martin, the knight loses a little more of himself each time he is brought back from the dead. Indeed, in the show, he's shown to be weary and resigned to his fate as nothing more than a tool to be used as the Lord of Light sees fit. He's more than willing to sacrifice himself for others, and he suggests that Jon should be too. The implication seems to be that their lives are no longer theirs now that they've been brought back from the dead.

On the upside, Beric did get a cool sword trick out of the deal. Being truly alive would be better than slicing your hand open to ignite a fiery sword in order to fight an army of the undead, but when you're playing the game of thrones, you have to appreciate whatever small perks the universe offers you. And it's entirely possible this is one perk that Jon possesses as well, even if he doesn't realize it yet. If fire is truly keeping these two men alive, then Jon's blood should be able to produce a similar effect — only his sword could be far more impressive than Beric's.

Longclaw is made from Valyrian steel, so adding fire to its White Walker-killing abilities would make Jon even more of a force to be reckoned with than he already is. Let's just hope poor Beric doesn't end up suffering from sword envy.