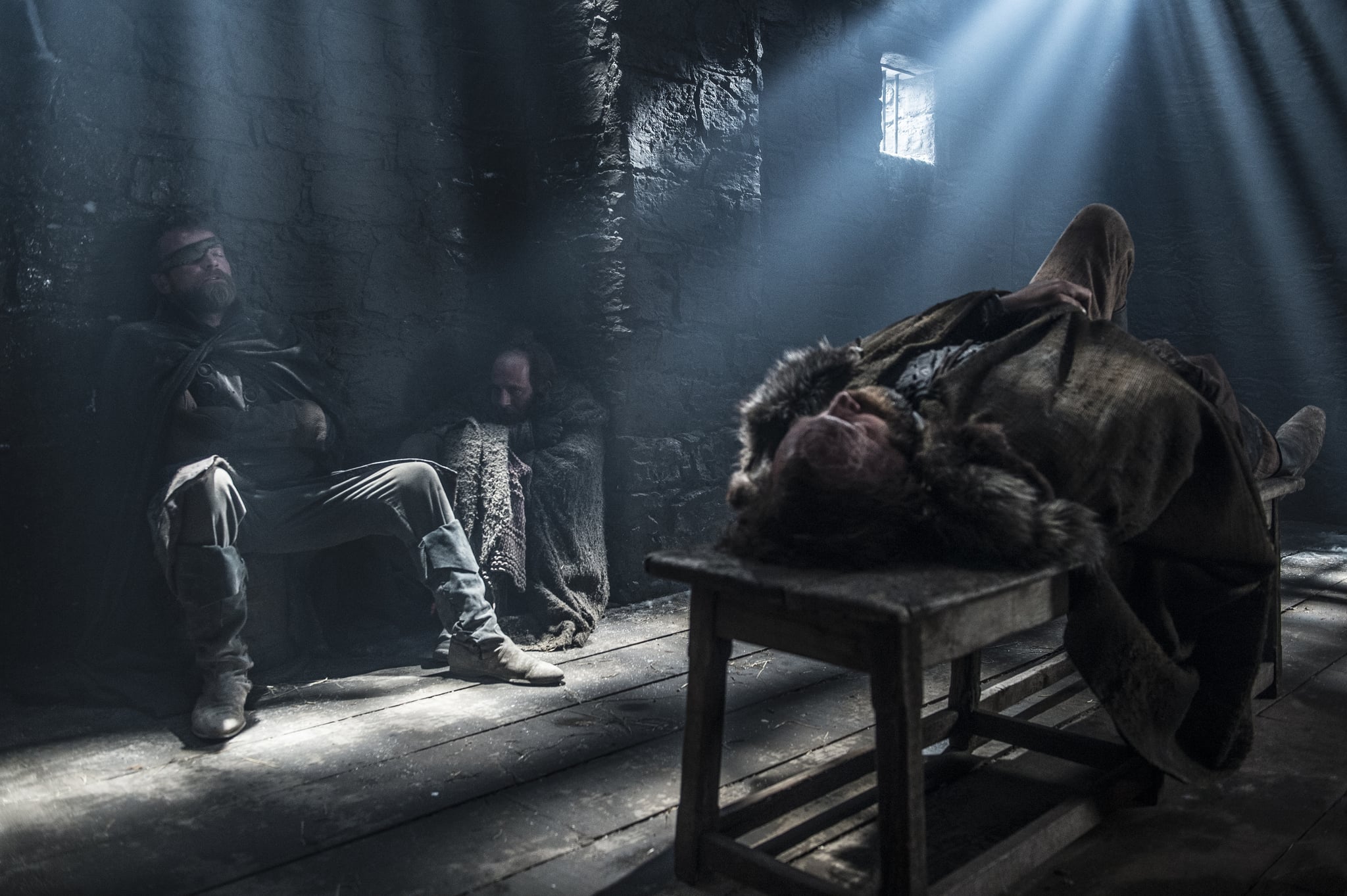 We'll never stop being stunned by just how small a world Westeros is. At the end of "Eastwatch," the fifth episode of Game of Thrones season seven, Jon Snow is led to the dungeon at the base of Eastwatch by the Sea, where he links up with an unexpected group.

A few members of the Brotherhood Without Banners — the Hound, Beric Dondarrion, and Thoros of Myr — are all kicking it behind Eastwatch's bars after being captured by Tormund's Wildling scouts beyond the Wall. Although Beric explains that they "don't want to go beyond the Wall," they have to, the recently returned Gendry warns his new BFF not to trust a word they say (remember when the Brotherhood sold Gendry to Melisandre? Yeah, so does Gendry). Fortunately, they're given a chance to prove themselves due to Jon's past with the Hound and Ser Jorah's history with Thoros. While we're well aware of how Jon and the Hound first met, how do Jorah and Thoros know each other? It turns out they briefly met way, way back, which they reference in the sixth episode, "Beyond the Wall," before Thoros's untimely death.

Thoros is not your average topknot-wearing traveler. He possesses a power we've rarely seen exhibited in the show save for a few key moments with Melisandre: the ability to bring the dead back to life. In the Song of Ice and Fire books, Thoros has a bigger part to play, where he's repeatedly seen bringing Beric back to life while on the road with the Brotherhood Without Banners, a group that he helped found. Before all of that, however, he served a stint in the army and was celebrated for his legendary bravery after a battle he fought alongside Jorah, which the two men discuss — and Thoros tries to dismiss his heroism as drunkenness.

Nine years before the start of the main story, Balon Greyjoy's first rebellion was in full swing. King Robert Baratheon sent an army to lay siege on Pyke, where both Thoros and Jorah displayed extreme courage when the pair of them charged into the Ironborn stronghold, swords blazing (quite literally, in Thoros's case). Thoros was first through the door and Jorah second, a story which the latter recalls during a conversation with Ser Barristan in season three, before the most recent episode's mention.

Upon seeing his former comrade in "Eastwatch," Jorah says, "Thoros? I hardly recognized you." Thoros, sitting on the floor of the cell, responds with a sardonic smile. "Jorah Mormont, they won't give me anything to drink down here," he quips, alluding to his reputation as a drunk. "I haven't been feeling like myself." This comment, though seemingly innocuous, leads to a tense conversation between Jorah and Tormund, due to Thoros using Jorah's last name. (His father, Jeor Mormont, was Lord Commander of the Night's Watch for years before Jon took over and hunted thousands of Wildlings "like animals.")