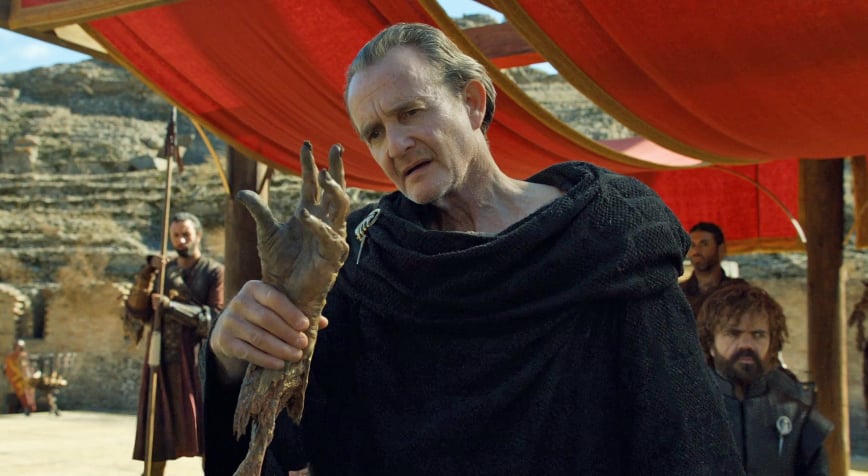 You probably already know this, but BIG Game of Thrones spoilers below!

Oh, Qyburn. Creepy, creepy Qyburn. Although we loathe the Westerosi version of Dr. Frankenstein, there's a chance that he just might be the key to saving everyone from the White Walker invasion, if his behavior in the Game of Thrones season seven finale is any indication.

When Jon Snow brings the wight to the dragonpit in King's Landing and shows off the undead creature's terrifying ability to keep on fighting even after the Hound slices him in half, pretty much everyone present looks visibly shaken (especially Euron, who promptly gets the f*ck out of there). Everyone except for Qyburn, that is. The mad doctor, who is responsible for bringing the Mountain back to life, approaches the mangled, severed wight hand that gets chopped off by the Hound without a shred of fear, picking up and thoroughly examining it as the fingers continue to move. He then gives the hand back to Jon so he can burn it and returns to his seat without saying a word.

Qyburn, for all his faults, could actually be a huge help in the Great War against the Night King.

Now, this is Qyburn we're talking about. This is the man who created the XXL crossbow to kill Daenerys's dragons, orchestrated Maester Pycelle's gruesome death at the hands of a bunch of children, and yes, brought Gregor Clegane back to life as a zombie. He certainly isn't afraid to think outside the box. It's the latter example, though, that makes us think that Qyburn, for all his faults, could actually be a huge help in the Great War against the Night King.

The exact method by which he brings the Mountain back is unknown, but it's obvious that he uses some kind of mix of black magic and necromancy to reanimate the battered corpse. As it says in the Song of Ice and Fire books, the reappearance of dragons in Westeros heralds the return of magic to the realm as well; Melisandre and Thoros of Myr both make comments alluding to how their abilities have gotten stronger ever since the birth of Dany's dragons. It makes sense then that Qyburn's forays into necromancy, especially with his extensive knowledge of how the human body works, would also become more successful.

You know who else dabbles in necromancy? The Night King.

As we've seen in previous episodes, the Night King (and other White Walkers) can bring human beings and supernatural creatures, like dragons and giants, back from the dead as wights (he can also turn babies into White Walkers, as we see him do with a child from Craster's Keep). The Night King uses some kind of ancient black magic to achieve this, which begs the question: can Qyburn shed some light on how the White Walkers reanimate the dead?

Since the Night King is a magical being himself, he could just be channeling whatever is coursing through his own veins. But what if the magic he uses to resuscitate the dead is something that anyone with strong magical abilities can also harness? If it is, it stands to reason that Qyburn could then use his knowledge to help figure out a way to keep the Night King from raising more corpses for his undead army. If he can't do that, we already know Qyburn has raised someone from the dead himself — what's stopping him from creating his own army of zombies to fight on Cersei's behalf? Between them and the Golden Company, King's Landing might actually stand a chance against the Night King.

Regardless of what happens, it's clear in the finale scene when Qyburn looks at the wight's still-moving fingers that the wheels in his twisted brain are spinning at a million miles an hour. Let's pray that he can come up with something soon, or else we might have to deal with a zombie version of Qyburn in season eight. No one wants that.