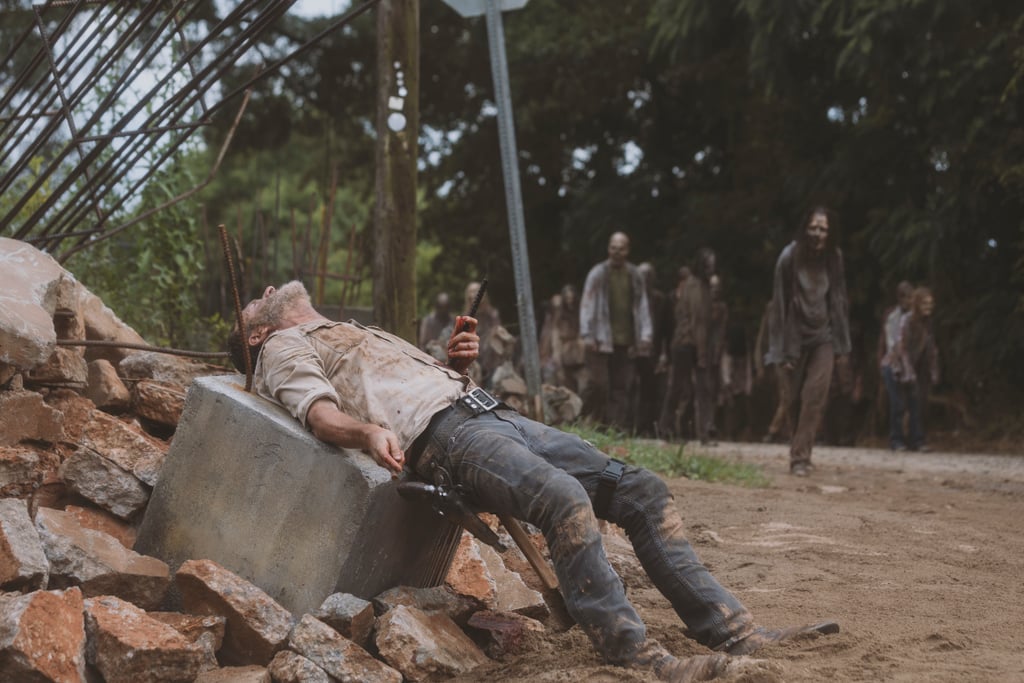 We're So Close to the End of Rick Grimes on The Walking Dead, and Fans Cannot Deal

Warning: Spoilers for the latest episode of The Walking Dead ahead!

The end is nigh, folks. We are an episode away from Rick Grimes's final episode and The Walking Dead fans are definitely not prepared.

Season nine's fourth episode, "The Obliged," set the apocalyptic sheriff's death in motion and it truly looks like there's no turning back from here. Amid all the unrest between the communities and folks turning away from his bridge pet project, Rick also has to contend with Maggie and Daryl's scheming.

When Rick learns Maggie is on her way to Alexandria, he knows she's going there to kill Negan and attempts to leave the bridge's construction site to get there first. Daryl, playing his role of distraction, offers to take him there on his bike. The two begin a wayward journey to Alexandria, during which all the unspoken tension between them bubbles up. Considering how unsubtle Daryl has been about his feelings of discontent, it's no surprise that the two get into it during their bike ride. Their verbal sparring becomes an actual scuffle (which is weirdly amusing to watch because normally TWD scuffles involve machetes or something lethal) before the two fall into a pit on the side of the road.

Related:
5 Ways Rick Grimes Could Leave The Walking Dead, and the 1 Way We Hope He Does

The pit allows the two to properly hash out their differences, but they can't truly come to an accord. Rick refuses to let Daryl or Maggie destroy the dream world he's resolved to make in his son's honor. Daryl pleads with Rick to let go of Carl, telling him his dream of utopia isn't worth fighting for. When Rick finds a horse and the two part ways, it's a little heartbreaking to think that it's probably the last time they'll ever see each other again.

Now on his horse (which is white and an omen of death if I ever saw one), Rick heads back to the bridge to try and lead away the approaching walker herd from the site. In a scene that brings back memories of season one, Rick and his horse find themselves at a fork in the road, flanked by two hordes of walkers. The horse spooks and rears up, dropping Rick into a pile of rubble and running off. Rick is left behind, his stomach impaled by steel rebar, as the walkers come closer to him.

In true Walking Dead fashion, we're left to wonder, "Is this it?" Is this how Rick Grimes is truly going to go? Served up to walkers on a silver platter with no way out? As I've said before, it better not be! Despite Glenn not being around to rescue him from his horse-afflicted fate this time, we're sure there's going to more to this ending than we expect. But even so, that doesn't make it easier to watch. Fans don't know whether to be more torn up about Rick's imminent end, that emotional goodbye between Rick and Daryl, or the turmoil they have to look forward to in the next episode. Keep reading to see some of their reactions ahead.

Mindy Kaling
Never Have I Ever: Is Mindy Kaling's New Netflix Show Autobiographical? Here's What She Says
by Amanda Prahl 2 hours ago

The Bachelor
How Does The Bachelor: Listen to Your Heart Actually Work? Here's the Deal
by Corinne Sullivan 3 hours ago

Supernatural
Will Supernatural Still Have a Series Finale? The Winchesters Will Be Back . . . Eventually
by Sabienna Bowman 3 hours ago

Siren
Siren Season 3 Is Already Available on Hulu, but There's a Catch
by Amanda Prahl 4 hours ago