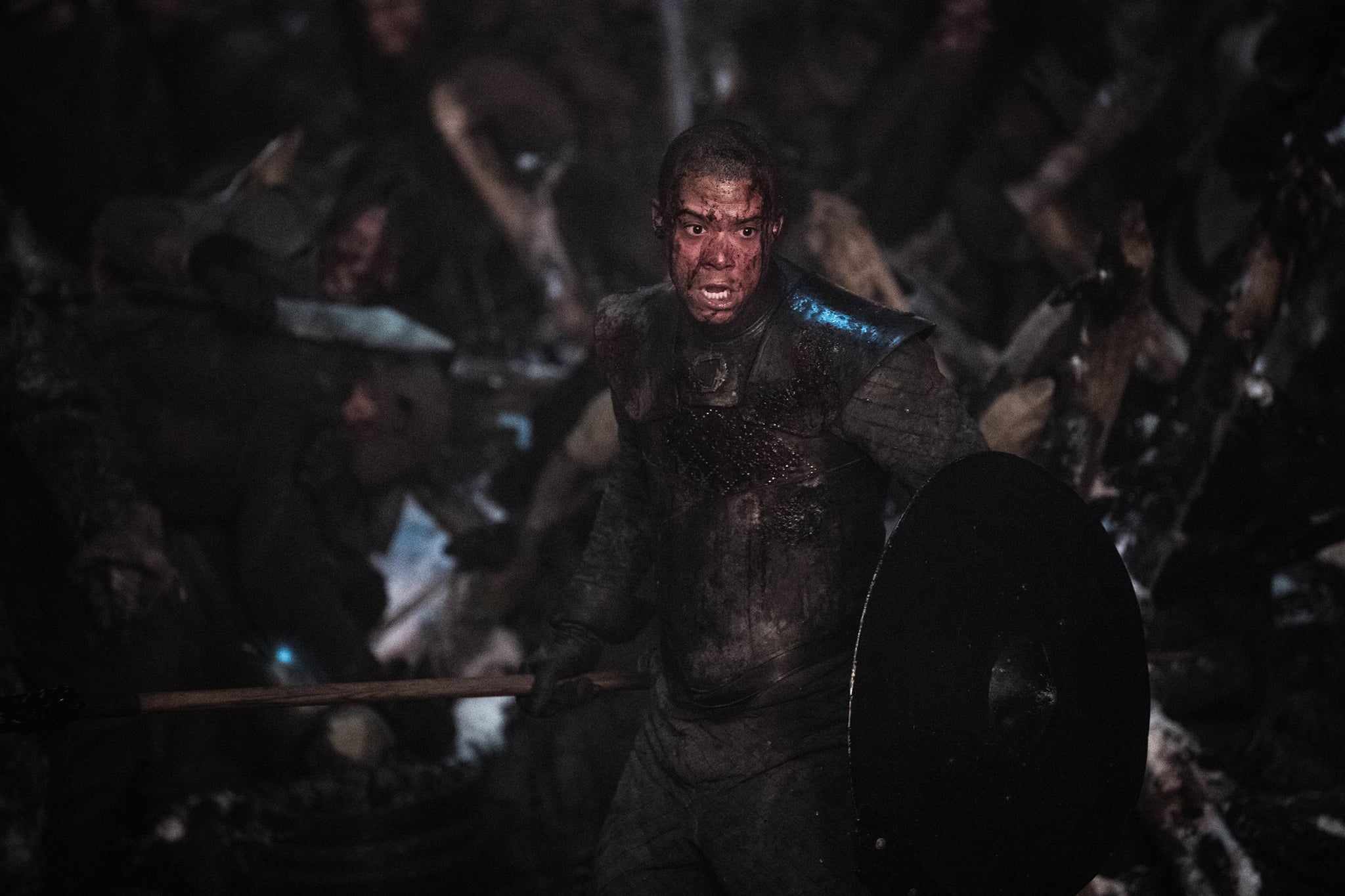 The Battle of Winterfell on Game of Thrones is as brutal as expected. Tons of characters fought their hardest (and didn't make it out alive) and much of the episode is filled with impressive action shot after action shot. But though they're sparse, there are some key scenes with important dialogue to be found, including an exchange between Melisandre and Grey Worm.

Before things get crazy for the Unsullied, Melisandre meets Grey Worm at the front lines and tells him, "Valar morghulis." He replies, "Valar dohaeris." Just in case you were too busy mourning deaths, you may have forgotten that those words have been said many times throughout the series.

Related:
Are You Sitting Down, Game of Thrones Fans? We Finally Know Ned Stark's Last Words

"Valar morghulis" is a High Valyrian phrase first uttered in season two, episode ten, by Jaqen H'ghar. After helping Arya escape from Harrenhal by assassinating guards, he tells her that she can learn those skills in Braavos. Though she has a list of people she wants to kill, she declines the invite. He gives her a coin with a "Valar Morghulis" inscription and tells her to say the words to anyone in Braavos if she does want to find him later.

The actual translation of the phrase isn't revealed until season three, episode three. Daenerys, who's made it to Astapor, strikes a deal with the slave trader Krhaznys mo Nakloz. She will give him Drogon if he gives her his Unsullied army and his translator Missandei. When Dany tells Missandei that being in her service will be dangerous, Missandei says, "Valar morghulis." Dany translates, "All men must die," and adds on the iconic line, "But we are not men."

The response to "valar morghulis" is meant to be "valar dohaeris." The phrase is first said in season three, episode six, when Melisandre and Thoros of Myr greet each other in the Riverlands. Its meaning isn't revealed until season five, episode three. In the House of Black and White in Braavos, Arya is irritated that Jaqen has given her cleaning tasks instead of teaching her how to kill. He insists that he will and says, "Valar Dohaeris — all men must serve."

These phrases seem heavily tied to the Faceless Men, assassins whose deity is the Many-Faced God. "Valar morghulis" then applies to their association with death, and "valar dohaeris" to their servitude to their god. But since the phrases are spoken by more than just Faceless Men, they seem to have taken on more universal meanings. "Valar morghulis" in particular often seems to be uttered to acknowledge the inevitability of death.

Related:
What You Need to Remember About Arya and Melisandre's History on Game of Thrones

In the case of Melisandre and Grey Worm at Winterfell, the phrases are even more impactful because of their impending face-off with the undead army. They know that many people aren't getting out of the battle alive, but they must fight for the living. For Grey Worm, that means physically attacking the White Walkers and wights with the Unsullied. For Melisandre, it means assisting with lighting battle tools on fire and helping Arya fulfill a premonition she saw way back in season three. With the huge battle over and another incoming, the High Valyrian phrases could make more appearances.