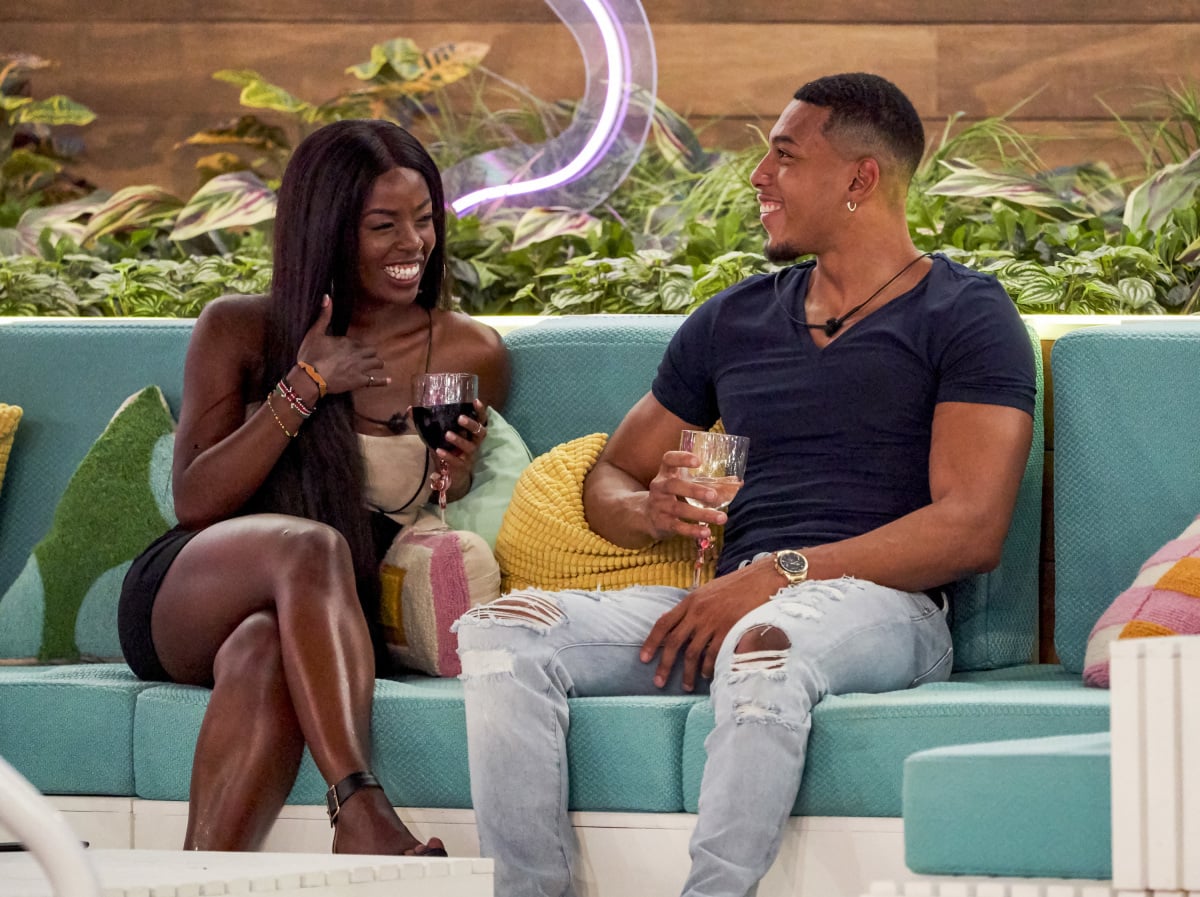 Reality dating shows have always satisfied the part of me that likes seeing the ridiculous heights production will reach trying to make "unscripted" reality look authentic. There's also a small part of me that doesn't want to miss the chance to see actual love blossom between people in unusual circumstances. But as a Black woman watching dating shows like Love Island or The Bachelor, the experience is more like a roller coaster of dread, anticipating the moment where the Black women cast will suffer microaggressions, get painted as villains with heinous edits, or worse, be forced to endure the strain of being thought of as undesirable.

Some people would say this is the fear for any woman on a dating show, but let's all be honest with ourselves: it's different for Black women. Any Black viewer probably goes through the same watching experience: you feel excitement at seeing a Black woman in the crowd, then you immediately want her to leave because you already know it's not going to go well. You want to protect her from the inevitable disappointment, and when her journey on the show ends, you feel disillusionment from the same thing always happening. Enter Justine Ndiba, a contestant on Love Island USA's second season.

Justine is the sole Black woman in the opening cast and also happens to be the only dark-skinned contestant. The other Black contestants (Jeremiah White, Tre Forte, Johnny Middlebrooks, and newcomers Rachel Lundell and Caleb Corprew) are notably lighter than her — which also plays a part in the dynamics of the season, but we'll get to that in a minute. Justine was already at a disadvantage from the beginning of the show — the four other women on the cast fall under the Western beauty standards promoted by the fashion industries, television, the internet, and social media. Everything we know and consume as society tells us whiteness is the ideal while Blackness, with rare exceptions, is undesirable.

So when Justine entered the Las Vegas villa, regardless of how beautiful she is or how vivacious her personality is, she was automatically placed at the bottom of the totem pole.

For most Black viewers, this isn't new or surprising; it reflects the reality of dating, especially online. Statistically, Black women have the lowest matches when it comes to online dating and are seen as the least attractive against white women, Asian women, and Latinas. While recent years have led to a renaissance in appreciation for Black beauty, that attitude is still prevalent in society and even finds itself in Black communities. On a show like Love Island where visual and sexual attraction is the name of the game, the anti-Black beauty ideals come out in full force. No one is trying to ask themselves why they're attracted to the person they're into, they're just trying to end up with someone they like enough to "do bits" until they go home.

No one is trying to ask themselves why they're attracted to the person they're into.

When Justine stepped forward to signal her attraction to Jeremiah (and was the only one who did so), it was expected. So was his choice of picking Cely Vazquez, the sweet-faced Latina who didn't step up for him in the first place. When Tre came out to steal Cely away from Jeremiah, forcing the latter to be partnered with Justine since she was the only woman still unpicked, the 27-year-old billing coordinator and go-go dancer described the situation perfectly: "This is so awkward," she said, laughing uncomfortably. When she lamented to contestant Mackenzie Dipman about not being able to find the same connection that everyone else in the villa seemed to find, the younger woman attempted to console her by saying, "I think guys are just intimidated by you."

I can only imagine the collective sigh of Black women who have heard that one too many times. Though Mackenzie's heart was in the right place, the truth of the matter is much plainer than she or anyone else cares to admit: Justine, as beautiful as she is, doesn't fit into any of the men's "preferences," not even the Black men of the show. We've all heard, "It's just my preference, everyone has them," before and we will anytime someone suffers blowback for admitting they refuse to date a whole race of people. The truth is, things would be a lot easier if people just acknowledged that their preferences are rooted in anti-Blackness and prejudice.

Related:
How I Discuss Allyship in My Interracial Relationship

Now, I'm not telling people who they have to be attracted to; that's not the point I'm making. But if you're in a house filled with beautiful women and the only person you can't fathom being attracted to is the dark-skinned Black woman, you need to reevaluate what your "preferences" are and exactly where they came from.

Black women, both on TV and in the real world, get the short end of the stick on all fronts, especially dark-skinned women. Black men tend to see light-skinned, biracial, or women of other races as more attractive. As seen in Justine's example, of all the Black men who have come into the show so far, Caleb has been the only one to express interest in her without the threat of an imminent recoupling looming or outside forces putting them together. Jeremiah, the first guy Justine was attracted to, didn't spare her a chance, reiterating that he sees her as a friend.

It's a sentiment that gets repeated by Tre, who found himself torn between Justine and Kaitlyn for the season's first recoupling. Tre continually stated that he's attracted to Kaitlyn, even kissing her when she was still coupled up with Connor, but admitted that he finds himself able to open up more with Justine. Whenever Tre talked to the other guys, they emphasized that Tre is sexually attracted to Kaitlyn, while Justine is a "good girl" who he can trust will go the distance. 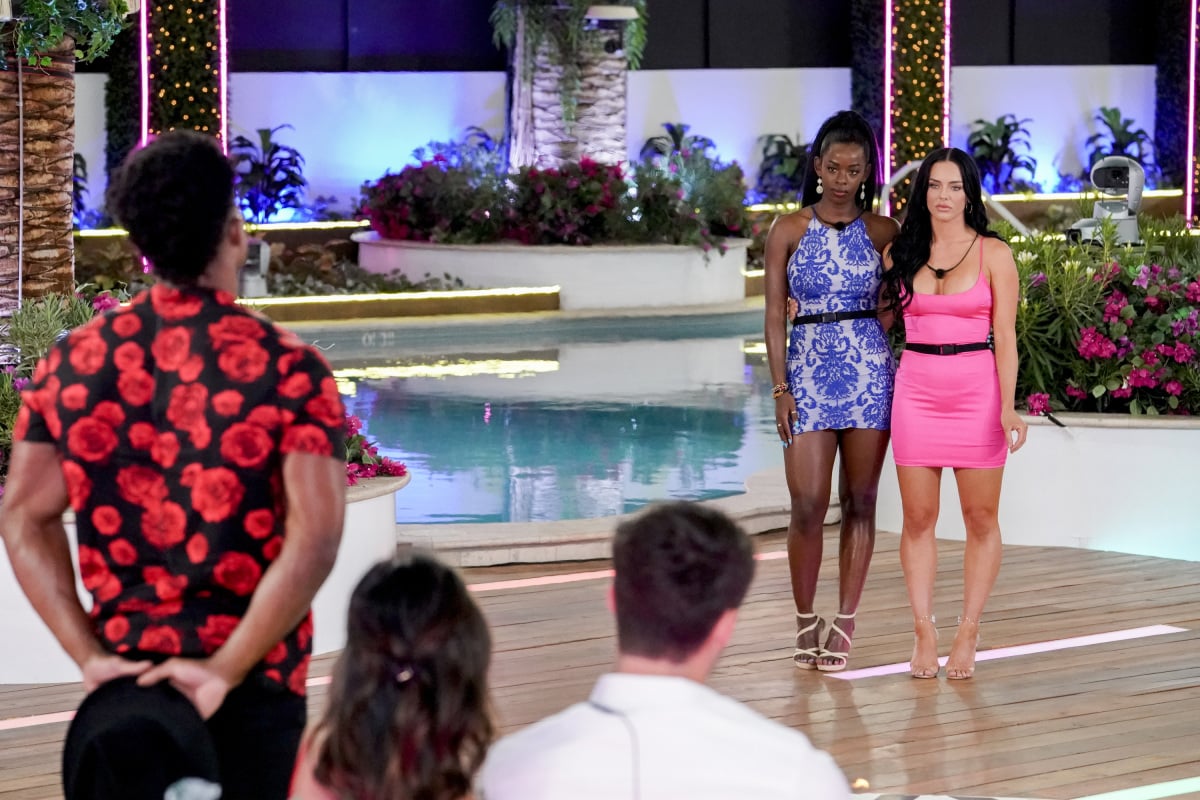 Justine's fate being in the hands of Tre was even more of a slap in the face when you look back at his now-deleted tweets from 2014, one of which read: "I want my future kids to be mixed with something else," insinuating he didn't want his kids to have a Black mother. Though Tre eventually chose Justine to couple up with, there's no telling if he genuinely wants to be with her or if she's the safe bet for his assured stay in the villa. He even says in the fifth episode, "I'm just happy to be coupled up again; it feels good not to be single."

This isn't the end of Justine's journey on Love Island, and despite the feeling of inevitability, there's no telling how her time on the show will go. But there are past examples to draw from that suggest it not going well, like UK's Samira Mighty, who eventually walked out, and Yewande Biala, who was the fourth contestant dumped from the villa. "We didn't find anyone who liked us. It was always someone coming in and saying 'My type is blonde and petite,'" Biala told 1Xtra Talks about struggling on the show alongside winner Amber Gill, who is mixed race, and Anna Vakili, who's Iranian. "We'd just look at each other and say 'They're obviously not here for us.'"

Despite being on the other side of the world, that's the same problem with the USA's approach. It's not enough to just throw Black women onto the show and let them be cast aside because they don't tick the stereotypical boxes. That sort of diversity is just meant to address concerns in a completely superficial manner and usually ends up with viewers upset anyway. The true way to earn the trust of Black and other viewers of color is to dig beyond the surface of diversity. Find people who are actually interested in dating outside their race and doing so on TV and are above the age of 22, and check their damn socials! That last part shouldn't be so complicated.

by Jenny Sugar 41 minutes ago