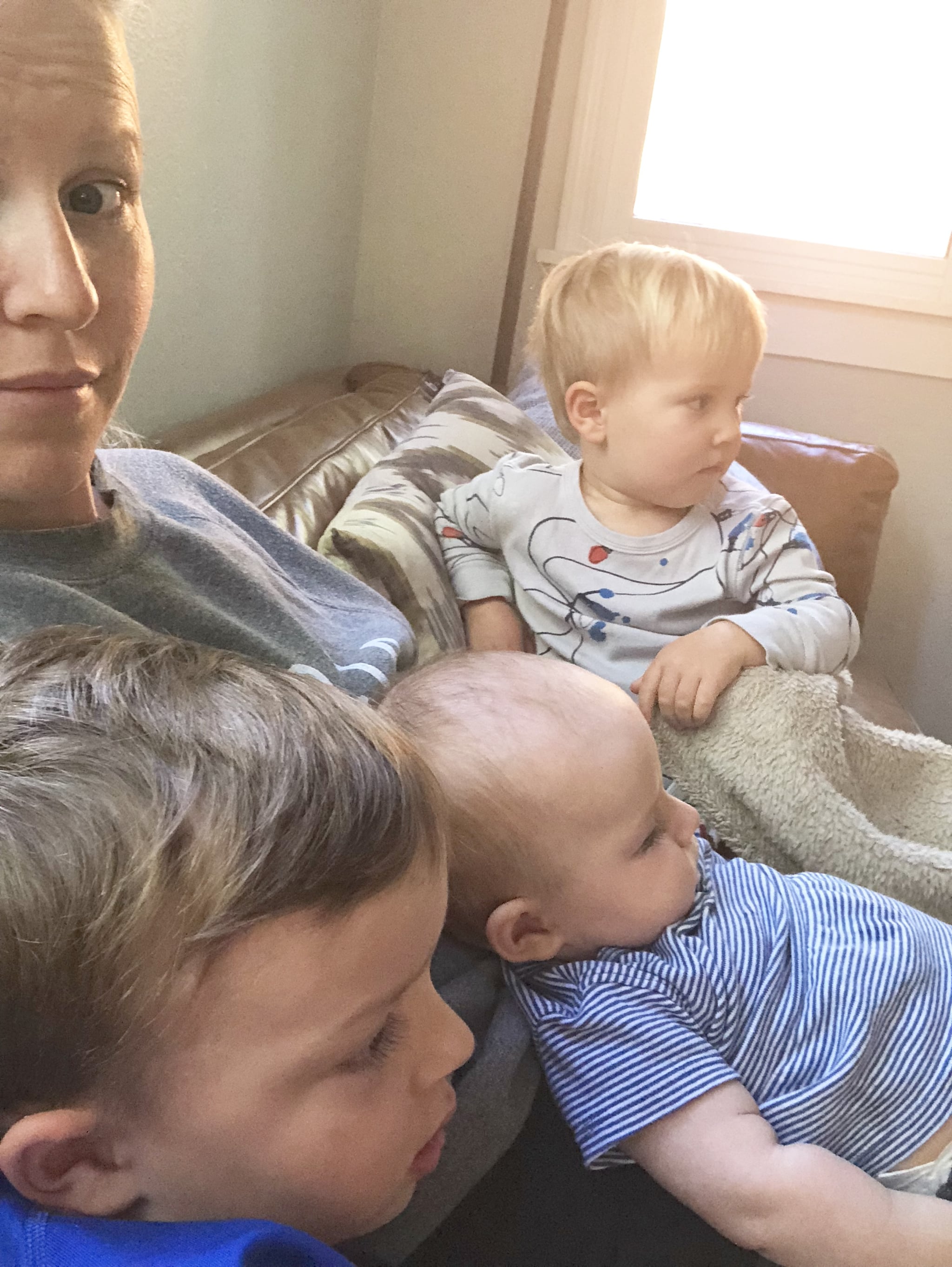 Having three kids close in age puts your family into a new category. One that seems to invite even more odd comments from strangers, incites plenty of stares, and gives you license to knowingly nod when you pass another parent with a trio in tow. Because until you're in the weeds with three little ones, there's just no way to know what you're in for. After I had my third child in four years, there were a lot of changes that took me by surprise — the laundry though, I should've seen that one coming.

1. You Won't Believe You're Starting All Over Again

You've already done it twice; you're a pro. Such a pro that maybe you didn't think much about what was ahead while you were waiting for your latest addition to arrive. But when you actually start waking up to feed a newborn every few hours again, it can be tough to settle into your new reality. For me, this state of disbelief disappeared after the first few weeks but it sure hit me hard when I realized I was starting back at square one.

If going from one to two kids hit you like a ton of bricks (as it did for me) you might be surprised with how well you cope when the third arrives. You're already the master of the juggling act, so there's not as much of a learning curve with one more in the mix. Don't get me wrong, it's still crazy on a new level, but for me it felt like less of an overwhelming shift.

3. You'll Feel Less Guilty Than You Did After Your Second Was Born

I was a mess worrying about my first child after his sibling arrived. Was he getting enough attention? Was he bored? Was he feeling neglected? But once the third was born I was pleasantly surprised with how much less guilt I felt about the older two because they had each other! They had a built in playmate, more distractions, and seemingly less awareness of how little time I was able spend with them both while I recovered from childbirth and cared for a newborn.

4. Things Will Be Different With Your Partner

It's all hands on deck with three young kiddos in the house, so while you'll hopefully see plenty of your partner (because you need the help!), you could go days without actually having a conversation and even longer before you notice they got a hair cut. And date nights, while more important than ever, will be even harder to make happen because as it turns out, asking someone to watch three children is a lot harder than asking someone to watch two. See point 6.

5. Your Standards Will Go Out the Window

Used to wrap gifts with cute bows and hang tags? A store bought bag and a piece of tissue paper will have to do. Planned and prepared weeks ahead for your vacation? You'll be stuffing luggage with questionably clean clothes hours before your flight. Cared about arriving to events on time? Making it to your destination before the party is over will be a victory. You'll get used to things not being exactly how you *used to* like them and learn quickly that having low expectations is the way to go.

6. It's Harder to Leave Them

Not because you're so attached to them that you can't stand the thought of leaving, but because it's a big ask to have friends or family take care of three children, especially when one is an infant. Which is a cruel irony because you need breaks now more than ever. And, yes, you can pay highly qualified people to watch them too, but it's going to cost you even more than it did before. So if you do manage to slip away to dinner, get ready to spend big bucks before you've even had a glass of wine.

Someone is always talking. Someone always needs to go potty. After you've put two kids to bed there's still one more to go. Food is being eaten at all times. The floor always needs to be vacuumed. The washer and dryer are on constantly. Once you've figured out swimming lessons for one you have to coordinate those with soccer practice for the other and make sure both work with the baby's "schedule." The activity and the to-do lists really never end with three kids in the house. And I'm only 6 months in so I can't even imagine how much truer this will be in another year.

Related:
What Actually Happens When Your Last Child Graduates Preschool

I've been pleasantly surprised with how well our family is adjusting to life with three (see point 2), but that definitely doesn't mean it's calm and collected around here. In fact, we're seconds away from absolute chaos at any moment. And this is not exclusive to the confines of our home. Get ready to cause a scene in public, pull over when car trips spiral out of control, and wonder what the hell happened when the mood turns on a dime. A crying baby takes everything else up a notch in a way that nothing else can. Except for maybe a toddler throwing a tantrum — and now you have both!

9. There Will Be More Laundry Than You Thought Possible

Unless you've got endless resources three kids means making some big decisions. There are childcare issues and daily logistics that make things much more complicated. You might have to shuffle rooms or even move. Maybe that vacation you always take will have to wait because airfare for five people is too expensive. And oh, have you checked to make sure all three car seats fit in the back of your car? It's not to say you can't make it work (because you will!), but it might mean more tough decisions and sacrifices than you thought you'd be making. (Obviously: worth it.)

The first year with two can be intense. Heck, even one is a lot to handle as a first time parent. But after you've experienced just a few days with three, you'll be shocked at how differently you feel when one is missing. The often manic mode you're in turns down a few notches and you might even have time to finish a whole cup of coffee. Taking care of only two feels oddly like a "break," which is hard to comprehend unless you've lived through three.

Identity
After My Mom Got Shot, It Took Years For Me to Understand That I Was a Survivor, Too
by Jakoby Mitchell 17 hours ago