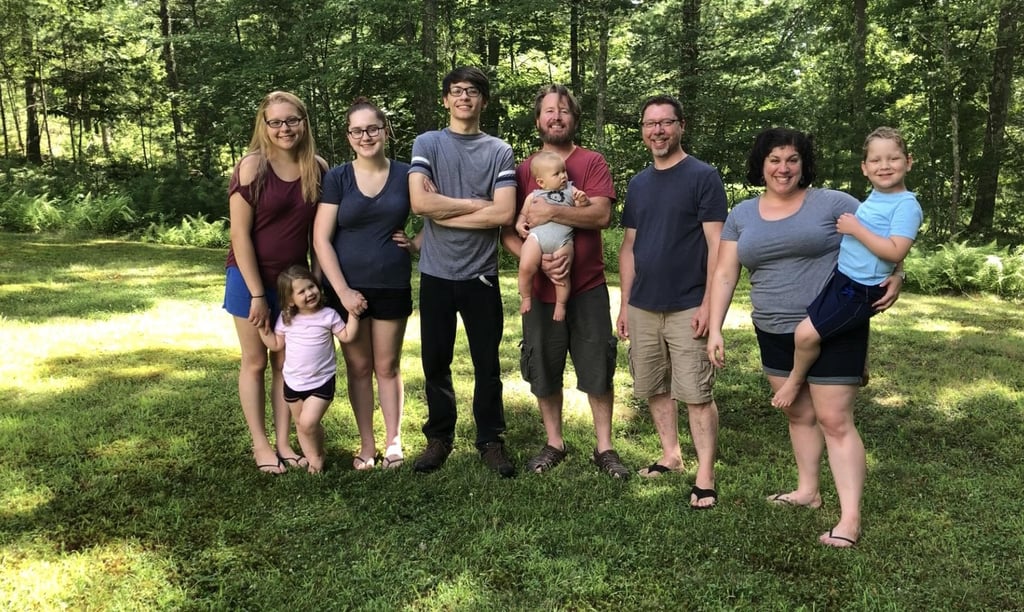 Lindsay Taylor, a 33-year-old mom of four and stepmom to two kiddos, has quite the setup when it comes to her living situation. She shares a home with both her ex-husband, Chris, and current husband Mike, along with all six children — and together, they make up the Taylor/Kelley family. And if Lindsay could be perfectly honest, she wouldn't have it any other way.

After having her daughter Rachel at 16, Lindsay met Chris, got married, and had two adorable kids, Lucas and Joanna with him. But unfortunately, the marriage didn't last and the pair divorced. Eventually, Lindsay married Mike, who had 21-year-old daughter Destiny and 19-year-old son Danny from a previous marriage. And before they knew it, Lindsay and Mike were welcoming a son of their own named Harrison.

Related:
See How This Divorced Couple Live Together With Their New Partners and Combined 6 Kids

Lindsay told POPSUGAR that living away from Chris post-divorce was problematic from the beginning, and that's when the notion of moving everyone under one roof came up.

"After Chris and I got divorced, I moved in with my mom in central Massachusetts for a few months," said Lindsay. "We didn't want the kids to move so I spent my days driving back and forth to be with them. Mike and I got an apartment together with his kids which was a little closer to my kids than where I was staying at my mother's, but it wasn't good enough."

"It wouldn't be easy at first, in the long run it would be the best ideal situation for our kids to have both parents under one roof again."

After the apartment they were renting was suddenly foreclosed on, Lindsay knew she needed to have a serious conversation about their living situation with her ex-husband.

"I sat down with Chris the next day and told him what was happening and we spoke about looking for a new place," she explained. "He was the one who suggested for all of us to move into his house in northeast Connecticut. He said that it wouldn't be easy at first, but in the long run it would be the best ideal situation for our kids to have both parents under one roof again."

Related:
See How This Divorced Couple Live Together With Their New Partners and Combined 6 Kids
Previous Next Start Slideshow
Little KidsParentingBlended FamiliesFamily