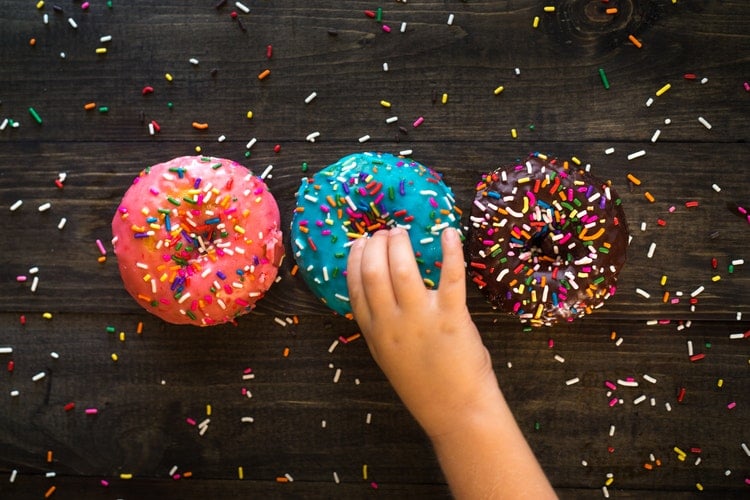 When my kids were younger, I was really uptight when my husband and I would bring them to visit their grandparents. I wanted our home rules to stay intact in their home: early bedtime, no sugary treats, and no screen time, just to name a few. I told myself that a night or two off from these rules would make them harder to follow when we went home, and that I would have to deal with major pushback because, "We're allowed to do this at grandma and grandpa's house." What I didn't realize at the time was that I wasn't giving their grandparents the joy they deserve.

Watching the smiles on their faces when they know they're about to be showered in love and sugar by their favorite people is worth it.

The best part about being a grandparent is being able to spoil their kids' kids. They don't have to be the strict disciplinarians anymore. They did their time, and now they get to be the cool ones the kids run to for sneaky pieces of chocolate, after-school milkshakes, an extra hour before bedtime, and pretty much whatever their little hearts desire. It gives kids a freedom they don't always get at home (structure is key, OK?), and it lets the grandparents act like kids again. And I was stripping this all from them. It wasn't fair. And honestly, following rules all the time made me a tense mother. I had to remind myself that rules are meant to be broken sometimes, even if they're my own.

So, while my decision was a bit drastic, I decided to throw out all of my rules at grandma and grandpa's. I informed my kids of this fact on one of our drives there, and it was as if I told them their bedrooms were being remodeled to be made out of cookies and that Santa was moving into the guest room. They couldn't be happier. Now whenever I tell my kids that we're going to their grandparents' house, they scream, "Yay! That means chocolate ice cream," to which I reply, "You bet it does." Watching the smiles on their faces when they know they're about to be showered in love and sugar by their favorite people is worth it. So, so worth it.

I also realized I wasn't giving enough credit to the grandparents. They know more about this parenting thing than my husband and I do — they did it for longer, are much wiser, and know every trick a child tries to play. They're smart, and they know how to handle things. It's not like they're buying our kids cars and puppies. They keep it all in check, and it was about time I recognized that. During our last visit, the kids ate chocolate chip pancakes dripping with butter and syrup for dinner. After their plates were licked clean, grandma asked, "Now who's ready for dessert?" The old me would have heavily protested against more sugar, dreading bedtime and the inevitable stomach aches, but instead I sat there with a smirk and said, "Where's mine?" A really special memory for all of us was made in that moment.

The time my kids spend with their grandparents is so special, and it should consist of these very kinds of memories — crying from laughing too hard, sticky fingers from syrupy pancakes, and falling asleep cuddled up with each other while watching a movie past their bedtime. Grandparents are able to give kids something parents can't, and instead of forcing our home life to exist outside of our home, I loosened the reigns to expand their horizons. They'll be better people for it. We all will.