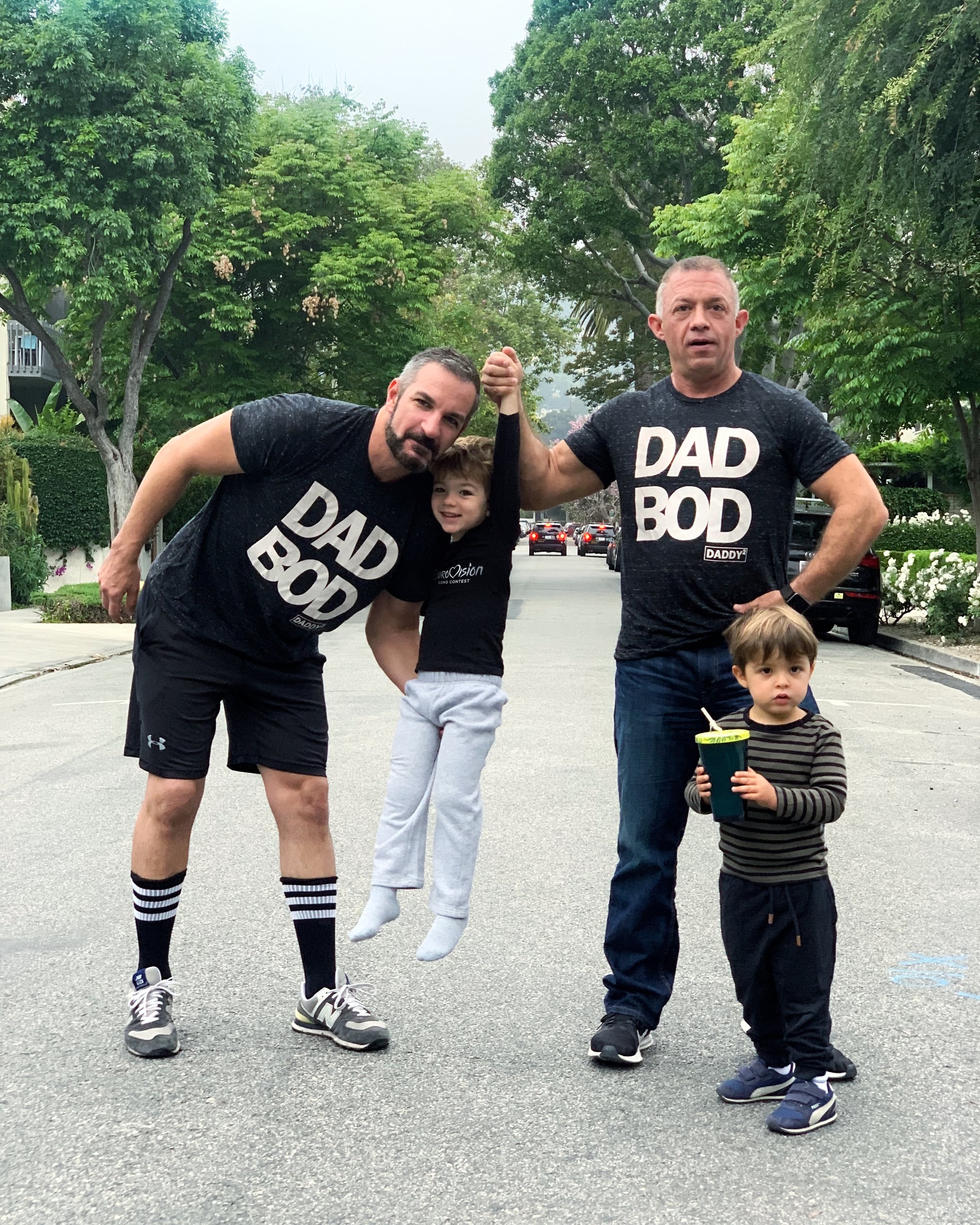 For Yan Dekel and his husband, Alex Maghen — who host Daddy Squared: The Gay Dads Podcast — welcoming twin boys via surrogacy four years ago has been the biggest blessing of their lives.

"Our kids were born when I was 47 years old, and we decided to look into surrogacy when I was around 45 or 44," Alex told POPSUGAR. "I had always wanted to have children, but obviously one of the big differences between being a gay couple and a straight couple is that many straight couples can have a bottle of wine at dinner and nine months later a child is born. For a gay couple, it's often a much more careful and thoughtful process."

Related:
After Years of Disappointment, Surrogacy Finally Gave Me the Chance to Be a Parent

Alex and Yan's reasoning for going the surrogacy route was straightforward: they wanted to have a genetic connection to their children. "Both Alex and I were very curious to see what our own genes would look like," Yan explained. "Part of my perception about having kids had a lot to do with the commitment I wanted to make to Alex. To me, my reason for wanting kids is very romantic. I wanted my genetics to be connected with Alex's forever so that if, God forbid, something happens between us, we'll always be together in a way."

"When the first child came out, we both burst out laughing because it was so obvious which kid had our DNA."

The pair enlisted the help of a surrogacy agency, which gave them access to a bank of women who were willing to donate their eggs. "We went through dozens of profiles and we came up with five finalists," Yan said. "Then we asked our closest friends and family to help us choose between the five. We ended up having three viable embryos: two male ones, which were given the quality grade of AA, and a girl one, which was graded BB. We froze them, and then waited to be matched with a surrogate. We were matched about four months after."

Although Yan and Alex didn't necessarily care about the sex of their children, they knew they wanted twins due to their age. Because of Yan and Alex's age, they wanted to try for two babies at once, and because they didn't care about their children's sex, they chose to implant the best-quality embryos. Having twins is considered to be a high-risk pregnancy, so representatives suggested trying for just one child at first. Set on having twins, they stuck to their original plan.

"During stressful experiences, it's easy to turn over and allow the experts to tell you what to do," Alex said. "And I think it's important to feel confident that what your heart desires is what you want to get, and go for it."

"There are ways to save money, but it's definitely going to cost a lot of money."

Their surrogate gave birth to biological half-brothers: one boy's DNA comes from Yan, while the other's comes from Alex. And although the couple didn't want to know which son took after which dad, they figured it out the second the babies were born with one look at their hair. "Right before we went into the delivery room, the doctor told us that she was capable of doing an instant genetic test to tell which one was which," Alex explained. "We immediately said no and that we didn't care, except when the first child came out, we both burst out laughing because it was so obvious which kid had our DNA." 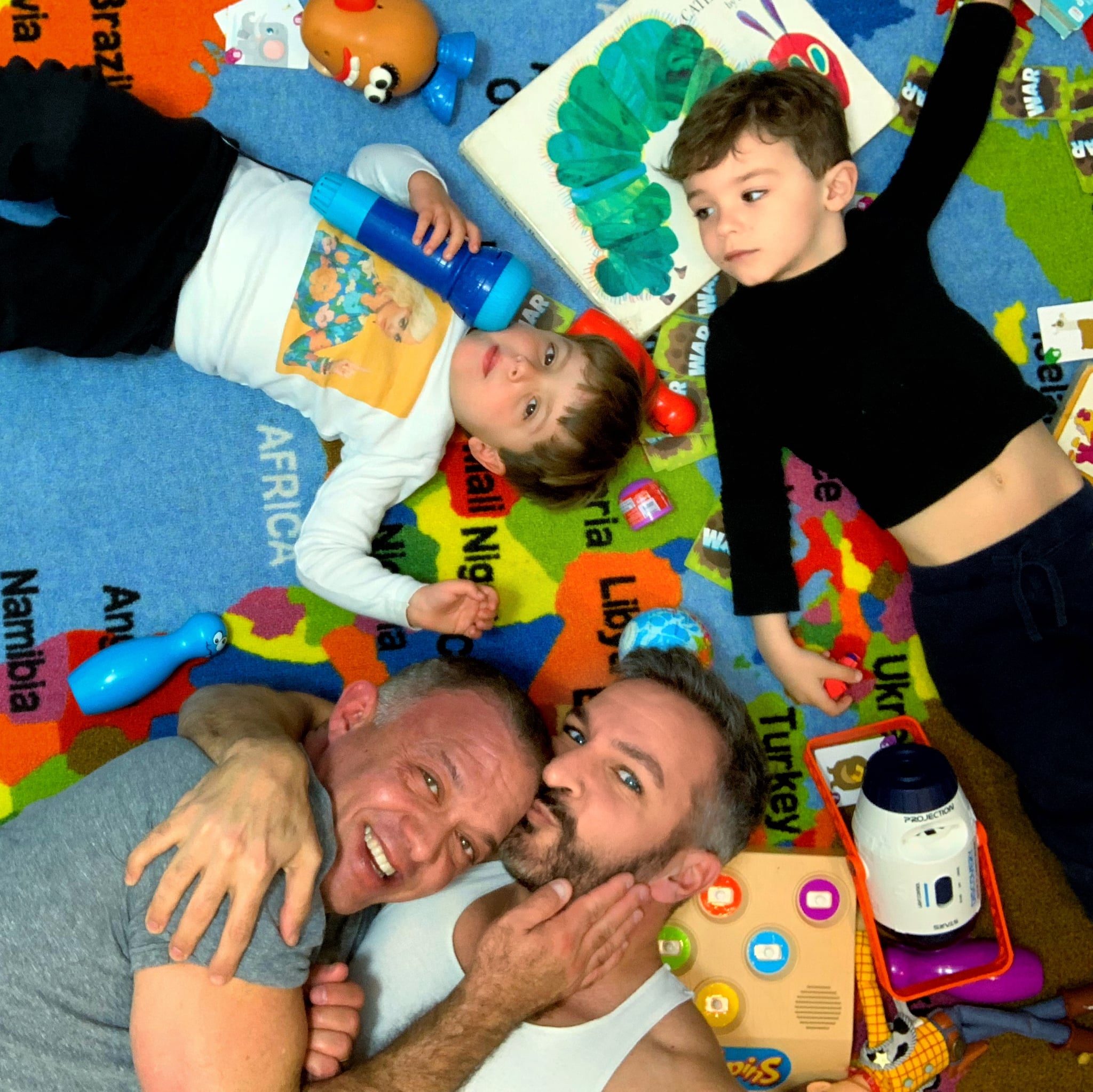 For these dads, few things were more surprising than how much biology played a part in everything from their children's mannerisms to the types of music they like. "It's really an amazing sociological experiment," Alex said. "Our boys are 4 years old and they've been raised the same way, they've had the same home environment, attend the same school, and they eat the same food, yet one of them conducts himself so much like me, and one of them conducts himself so much like Yan."

Yan agreed: "Alex and I sometime joke that we cloned ourselves. It's amazing to see how much genes hold. It's not only that they physically resemble us, but their personalities do, too — including their tastes in food! What's been amazing to me is that Alex's biological son sometimes speaks in a heavy Philadelphian accent when he's upset. Neither Alex nor I have this accent, but Alex's mother does since his family is originally from Philadelphia!"

Related:
Surrogacy Was a More Emotional Journey Than I Ever Expected — but So Worth It

For parents considering surrogacy, the couple recommends that people weigh all their options before fully committing.

"There's a lot of research that you can and should do," Alex said. "It's also going to cost a lot of money. There are ways to save money, but it's definitely going to cost a lot of money, and that's something you have to be prepared for. In a cold, hard way of putting it, surrogacy is a lot like buying a house. It's a big expense. It's a big undertaking. It can be stressful. And I think that you need to go into it feeling confident that you know what you want and not allowing other people to tell you how to do it."

Jesse Williams
Jesse Williams Addresses Nude Scenes in Broadway's "Take Me Out": "It's a Body"
by Chanel Vargas 5 days ago