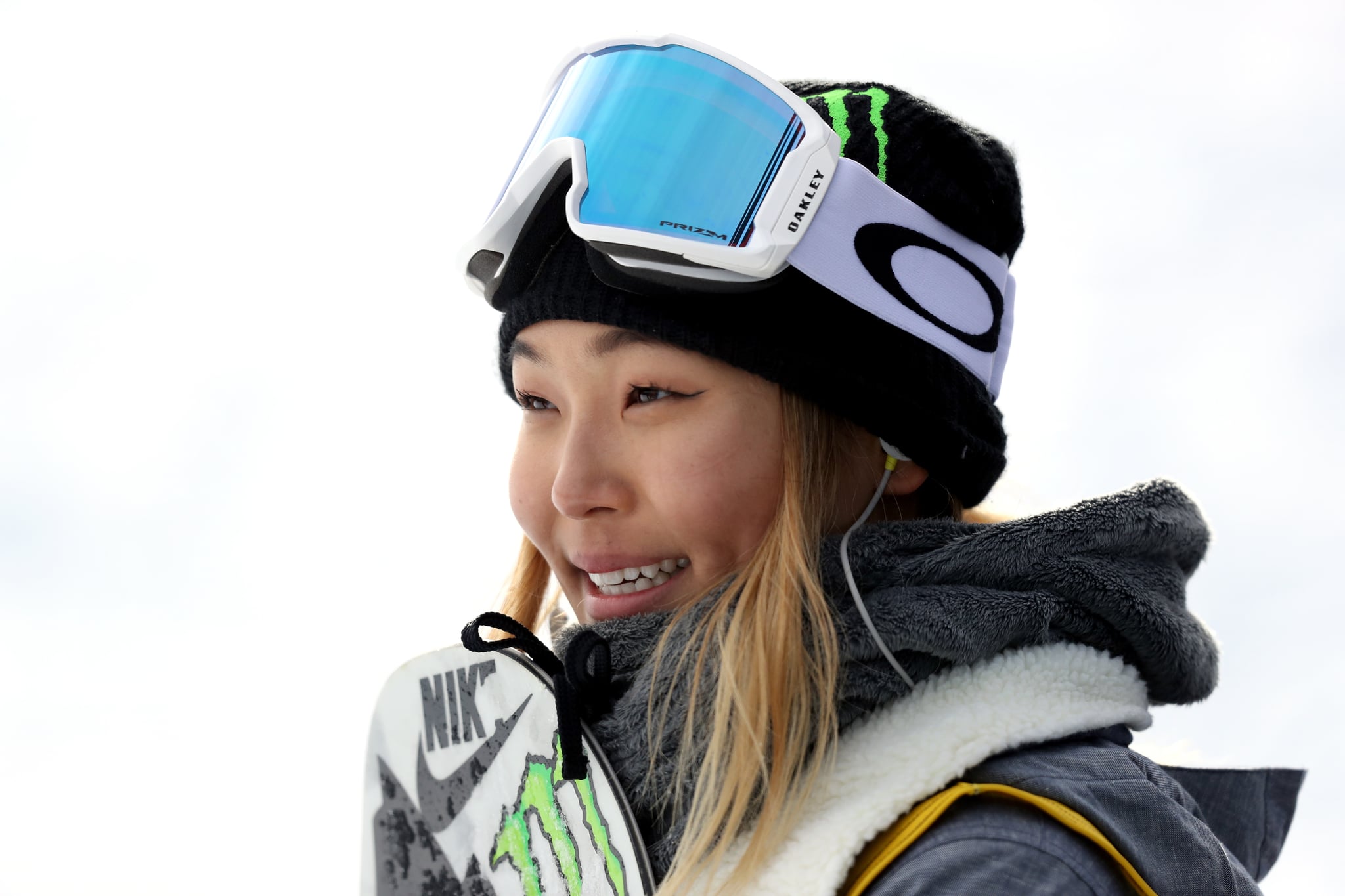 If you're not yet acquainted with Chloe Kim, it's time for that to change. The 17-year-old Winter Olympics newcomer from Los Angeles has been making headlines in the snowboarding world since long before she was old enough to compete at the Olympic level.

Chloe has been training hard to prepare for Pyeongchang, South Korea, with a schedule that the hilariously laid-back Southern Californian describes as "pretty mellow" — spoiler: it's not mellow. Her daily itinerary includes more than three hours of snowboarding and "recovering" on a Spin bike! Ahead, you'll see a day in the life of Chloe Kim, the future of women's snowboarding.

Chloe wakes up at 7 a.m. to give herself enough time to get up. She's "not really a morning person" and likes to have a slow start to the day. "I hate rushing," she said. "I need some time to lay in bed . . . I'm a pretty slow person in the morning." She gives herself plenty of time to get ready to go snowboarding — and to eat a big meal!

We learned that she's got an Olympic-level hunger that could probably rival Michael Phelps's. "I don't have a crazy diet," she told us. When we asked Chloe what she eats for breakfast, she said, "Chocolate pancakes, some biscuits and gravy, toast, and cottage cheese." Damn, girl.

Before she heads to the halfpipe, Chloe tries to take time to warm up her body. "I should warm up more often," Chloe admitted. "If you see me warming up at the top of the pipe, that's a rare occasion!"

Chloe has been crushing it at the X Games since she was 13 years old, winning her first silver medal before going on to become a three-time halfpipe gold medalist. That doesn't come without some serious practice! Chloe told POPSUGAR that she will "ride in the halfpipe for three hours" every day before taking her first break.

We asked Chloe to share a fun fact about her daily routine. Her answer? "I love taking selfies and pictures!" She told us that she just got the Samsung Galaxy S8, which "takes the best pictures ever — I don't even need a filter."

"I'm pretty lazy," Chloe said (which we find hard to believe), so the crisp camera makes taking and posting selfies to her Instagram even easier. "I don't need 60 apps to fix my photos now!" Chloe also shared that she's pretty excited to take some selfies in Pyeongchang.

Related:
Everything We Know About the 2018 Winter Olympics in Pyeongchang

True to her 17-year-old self, Chloe loves french fries and pizza. She said she loves going to CPK for a little pizza for lunch, depending on where she is.

After lunch, Chloe says she "rides a little more" — because three hours wasn't enough! She told POPSUGAR she loves snowboarding because it's so much fun, she doesn't think of it as work or exercise. "I don't even feel like I'm working hard or working out. It's just, like . . . fun, and I might be a little sore the next day, but I'm so down to go do it again. It's a pretty good workout! [laughs] I'd highly recommend it!"

After her second snowboarding session, she heads to meet up with her coach to "do video review." They'll recap her day and analyze certain parts of her snowboarding. This is to "see what I did [and the] things I can do to improve." This is a crucial part in fine-tuning her performance for Pyeongchang.

Recover at the Gym

"I go to the gym after that," Chloe said. She told us that the gym is actually her form of recovery. "I hop on a bike for about 20 minutes to flush my legs out," she said, in addition to doing some "light core, a little cardio," and "stretching." She told POPSUGAR that she hurt her knee a few years ago, and Spinning is how she keeps her joints happy.

Now it's dinner time, and what's on the menu depends entirely on Chloe's mood. "I eat whatever I crave; that's who I am!" she said, noting that In-N-Out and Chipotle are typically her top choices. It takes a lot of calories to fuel a champion! "I love food . . . just thinking about taking my favorite foods out of my diet would absolutely crush me." Amen.

Related:
If You're at Chipotle, These Are the Leanest, Lightest Orders

So how does a snowboarding champion like Chloe unwind after a day of Olympic-level training and eating? With . . . Dance Moms. Her decompression includes downtime with the TV. "I never really watched Dance Moms until recently," she admitted. "Every night, I'll watch two to three episodes a night. It's not that good, but I can't help it . . . I need it in my life!"