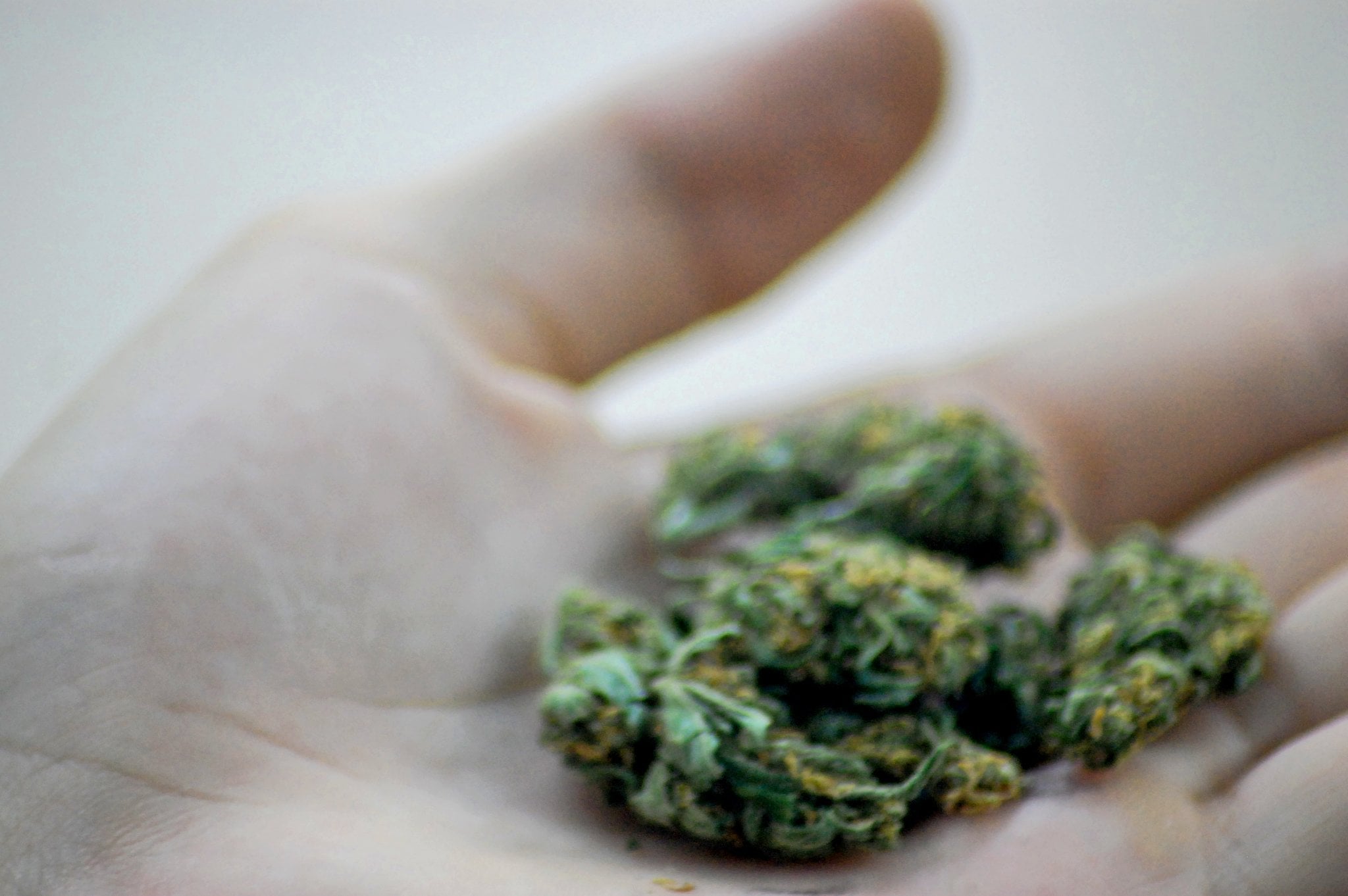 Although I was never someone who liked the idea of using medications to regulate my mood, a dual diagnosis of post-traumatic stress disorder and generalized anxiety disorder made them a necessity. I was first prescribed the benzodiazepine Klonopin in college, and although it certainly helped quell my anxiety, I noticed that my tolerance increased quickly, and I became shaky on days when I didn't take it.

I eventually weaned myself off Klonopin, but a mental-health setback during my first postgrad year in New York City put me back at square one. I left my new psychiatrist's office with a prescription for Valium. My tolerance increased even more rapidly than it had in college, and although the medication provided a reprieve from my intense anxiety and occasional panic attacks, Valium made me feel perpetually hazy. My usually razor-sharp memory suffered as well, but my anxiety had become unmanageable, so I felt like I didn't have any other option.

When I relocated to Seattle, a friend suggested I try medical cannabis in place of Valium. I was skeptical, to say the least. I'd smoked occasionally in college and I didn't even find it enjoyable, let alone anxiety-reducing. But what did I have to lose? I got a medical card, a prescription, and a vape pen and gave it a try. I was immediately (and pleasantly) surprised at how much it helped ease my daily level of anxiety, and I noticed that I was more alert and focused than when I took Valium.

Related:
If You Smoke Pot to Reduce Anxiety, It Turns Out There's a Perfect Amount To Use

At first I wondered if it was a placebo effect of some sort, but it turned out that switching to medical cannabis was the best decision for me. Everyone is different and, of course, all medications should be monitored by a doctor, but it turns out that many doctors recommend treating anxiety with medical cannabis rather than benzodiazepines like Valium, Xanax, Ativan, and Klonopin. After speaking with experts, I felt even better about my decision to switch to medical cannabis — and I'd definitely recommend that anyone currently taking benzodiazepines considers exploring the possibility.

"Benzodiazepines have a lot of long-term effects, and they can cause a dependency, which can actually be fatal during withdrawal," Dr. Matthew Roman, a medical cannabis doctor at Nature's Way Medicine, told POPSUGAR. "They can cause lives to be lost in the long run, whereas cannabis doesn't have the same addiction rates. So it's a lot safer, and its long-term and short-term side effects are significantly less, too."

Related:
Wake Up and Kick Your Anxiety's Ass With This Under-10-Minute Morning Routine

Dr. Jordan Tishler, a Harvard physician, cannabis therapeutics specialist, and the CEO of InhaleMD, told POPSUGAR that while cannabis does pose a risk of dependency (which he notes is not the same thing as addiction), it's "at a rate much lower than benzodiazepines, about equal to that of caffeine."

The effects of medical cannabis also seem to be longer-lasting than taking a dose of a benzodiazepine. "The interesting bit is that the benefits of cannabis for treating anxiety persist long past when the intoxication has worn off," Tishler said. "This lets us use cannabis before bedtime and yet have persistent anxiety control throughout the next day."

Additionally, both Roman and Tishler said medical cannabis is safe to use alongside other prescription medications such as antidepressants. In fact, Tishler noted that cannabis can help relieve some of the uncomfortable side effects caused by SSRIs.

Although I no longer use Valium on a daily basis to treat my anxiety, I keep a prescription on hand because I occasionally suffer from panic attacks and found that medical cannabis isn't especially effective when panic strikes. Although Roman emphasized that every patient needs to have a specific, clear plan with their medical provider, he confirmed that my situation is fairly common. So if you also suffer from panic attacks, don't be afraid to talk to your doctor about keeping benzodiazepines on hand.

"If someone is having an acute panic attack, it's probably better to take a benzo in certain cases. In severe instances, you do need to essentially subdue the mind, and that's what those drugs do," Roman explained. "They have a lot of side effects because of that, but they're good at subduing people who are in an anxious state and need some heavier medication than cannabis can provide."

I've had a positive experience with medical cannabis, and I'm grateful that I no longer need to worry about the health risks of taking benzodiazepines for years. But there are some exceptions, which is why it's so important to work closely with a medical provider to ensure you're using it safely. In short, it should be treated like any other medication.

"The best evidence at present suggests that cannabis use in generally healthy children and teens should be avoided, as their brains are still developing and cannabis might affect the development," Tishler said. "I'd also add that cannabis use in pregnancy and while breastfeeding is still a big unknown, with about equal evidence pointing to problems as not. Generally, it is currently felt that it should be avoided at these times."

It's also worth noting that not all doctors are convinced cannabis is the best treatment method. Los Angeles-based psychiatrist Dr. Anandhi Narasimhan doesn't prescribe medical cannabis and has reservations about using it to treat anxiety. "I have some concerns of people not understanding some of the negative effects," she told POPSUGAR, noting that it's not FDA regulated. "For example, driving on cannabis can be pretty dangerous, and people often aren't aware of it right away. And sometimes, in what I've observed personally, patients end up losing motivation and ambition on cannabis."

Narasimhan also has major concerns about benzodiazepines and doesn't prescribe them for long-term use. "I'm a conservative prescriber in general," she said. "When I see patients, one of the first things I do is talk about behavioral things we can do to help with anxiety, like exercise, mindfulness, meditation, getting an appropriate amount of sleep, and minimizing external stressors." She also emphasized the importance of therapy and cites cognitive-behavioral therapy (CBT) as an effective way to treat anxiety.

"I don't start with benzodiazepines unless it's severe anxiety where people can't leave the house and they're very incapacitated. I may use it short-term, but with the plan of tapering it off," Narasimhan said.

In my personal experience, I haven't been able to manage my anxiety without a combination of therapy and either benzos or medical cannabis. Between the two, medical cannabis has been the best, healthiest medication for me.

If you're an adult suffering from an anxiety disorder, it's definitely worth exploring the option of medical cannabis. Although I certainly can't confirm it's the solution for everyone, it's a low-risk medication that can alleviate your symptoms without the risks of benzodiazepines.

Image Source: Flickr user Katheirne Hitt
Any cannabis products referenced above are not intended to diagnose, treat, cure, or prevent any disease. The writer is not a medical doctor, and their experience is based on personal use, the results of which may not be typical or intended. The legality of cannabis products varies by state, and readers are encouraged to check their local laws before purchasing and using cannabis products. Nothing in this article should be construed as advice regarding the legal status of cannabis products. Any views expressed in this article by a third-party sponsor are those of such sponsor, and do not necessarily represent the views of POPSUGAR.
AnxietyPersonal EssayMarijuana

Personal Essay
The Reality of Being Black, Undocumented, and Never Qualifying For DACA
by Morelys Urbano 3 weeks ago