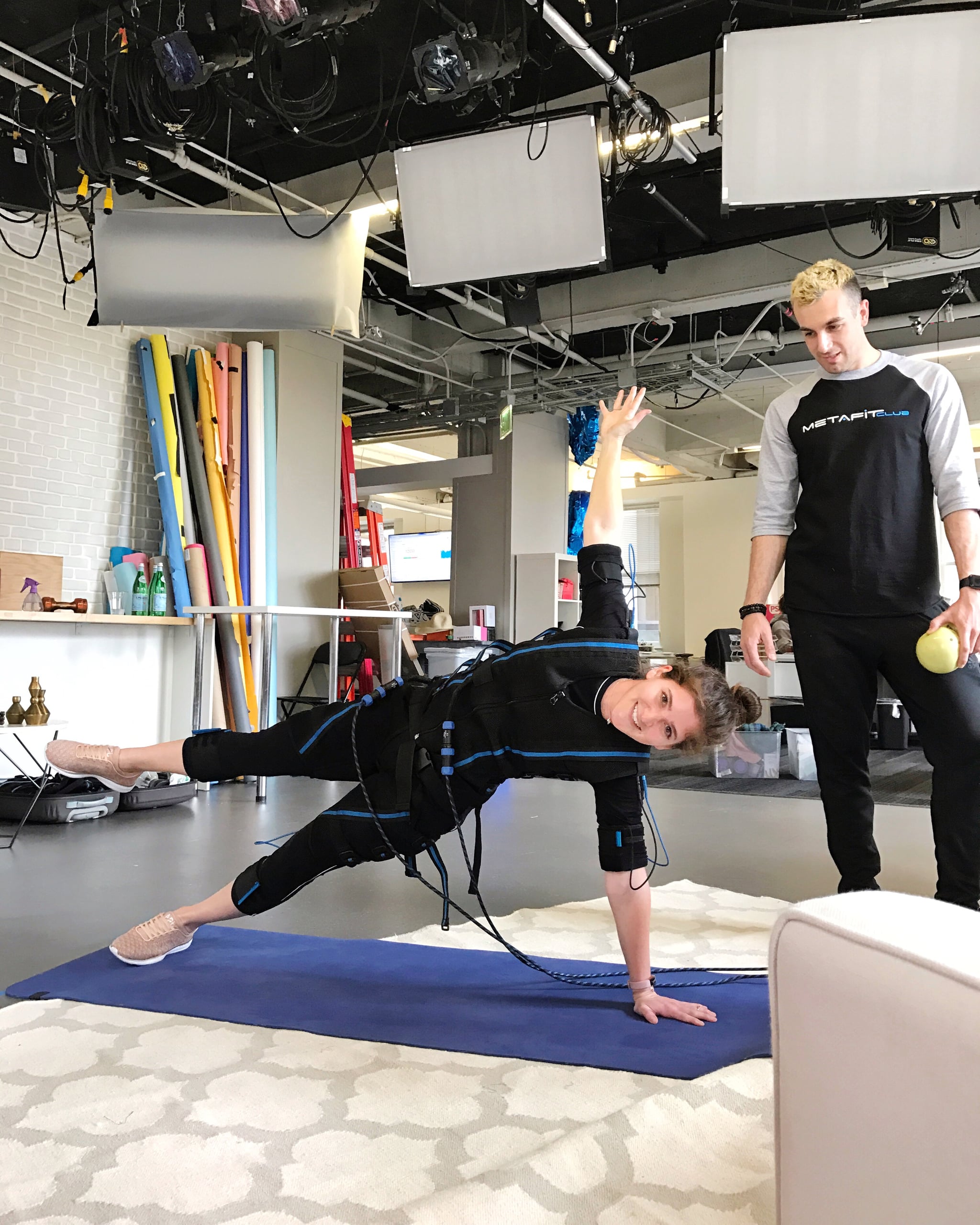 So here's the deal: EMS training — electrical muscle stimulation — is massively on the rise in the fitness world. It's huge in Europe, blowing up in New York, and slowly making its way to other major cities; as of now, there's only one approved EMS machine in San Francisco. Mega athletes like Usain Bolt and Cristiano Ronaldo have been using it, and because I'm a serious investigative journalist, I knew I needed to see for myself if this workout is all its cracked up to be.

Full disclosure: there isn't much conclusive scientific evidence yet saying that this is effective — the studies that have been done are quite small. I did a little digging online and also asked a few trainers what their thoughts were, and they gave mixed reviews (some were either unfamiliar or not into it). However, my acupuncturist, who uses this technology for physical therapy (on me, actually), thought it was a great concept.

Related:
Does Athleisure Makeup Actually Work? We Put It to the Test

"You look like you're auditioning to be a CGI character in a Peter Jackson film."

One (poorly translated) 2015 study used EMS training on 15 subjects in Malaysia and said that EMS can "improve athlete strength" and "increase muscle size and strength." A 40-person study from Budapest in 2012 (conducted by an EMS training company called E-Fit) also had positive results. A third study, published in 2005 in the American Physiological Society's Journal of Applied Physiology, showed remarkable results on 15 "sedentary adults," citing "significant improvements in exercise capacity (including cardiovascular fitness and muscle strength)" after EMS training. "This is the first study to demonstrate that such an effect is possible with use of a form of EMS that does not involve loading of the limbs or joints and that does not involve performance of external work." A 2011 French study said, "EMS training results in significant increase of muscle strength," and a 2011 American study (on 16 young female gymnasts) called EMS "a relevant and efficient complement to voluntary resistance training."

Conversely, the American Council on Exercise didn't see the same amazing effects. They commissioned a study in 2000 on 29 college athletes and reported the results as insignificant, calling EMS "ineffective [and] painful" (sweet). Some call EMS "bunk" or "pseudoscience." What I'm trying to say is this is a personal review, not a scientific declaration of fact. OK? OK. Proceed.

Related:
6 Workouts You'll Be Obsessing Over in 2017

Here's what went down with my experience with Jose Luis Zamorano and Alex Albelda — Spanish entrepreneurs, certified trainers, and founders of MetafitClub, the only EMS training company in San Francisco as of now.

You Get All Sorts of Strapped In

Before you even get to the warmup (depicted above), you get strapped in. Before you get strapped in, you change into specific EMS garb — what Jose described as the "right combination of cotton and spandex" for the electrode suit I'd be getting harnessed into. It feels like regular old black capri leggings and a three-quarter-length tee — no compression, just form-fitting.

Of note: they need hot water to spray down the suit, so you're actually pretty damp when you're working out. Fortunately, you notice less because you immediately begin to sweat.

Once you're all strapped up and look like you're auditioning to be a CGI character in a Peter Jackson film, you'll get plugged into the machine and the trainer will start to light you up, stimulating one muscle group at a time from calves to biceps until your whole body is abuzz.

It's tingly, not painful — though I was on a very "weak" setting, as my trainers so kindly reminded me (whatever!) until my darling colleague said, "You're going too easy on her; turn it up! Make it harder!"

I laughed immediately upon the initial sensation, which was a relief because I had been particularly anxious leading up to the shock. It's like a strange tickling sensation, and more amusing (at first) than intimidating. If you've ever had this kind of treatment at physical therapy, it's just like that! 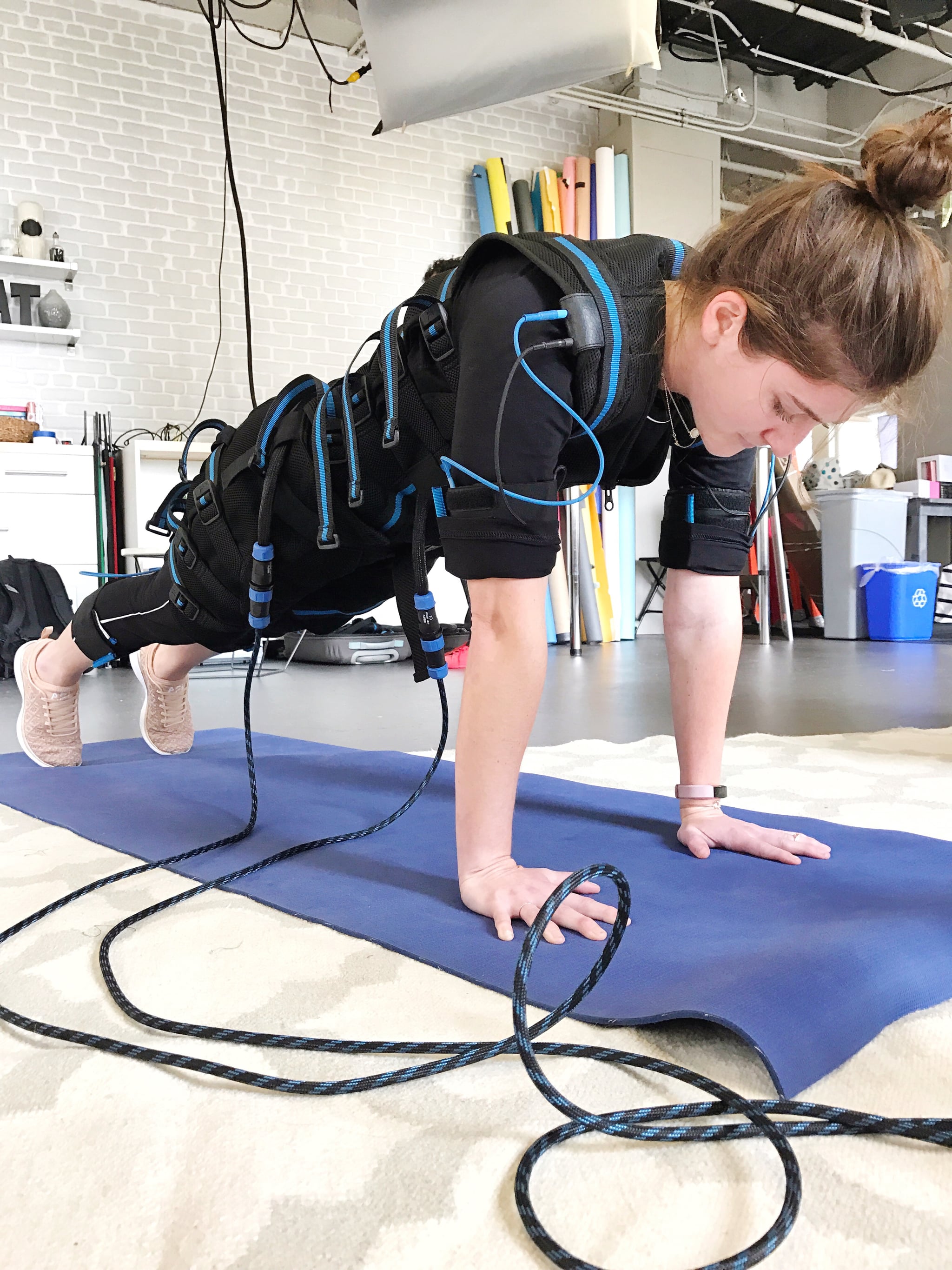 My muscles burned out rapidly, and I was immediately fatigued. Everything feels more difficult when your muscles are contracting like that — so much so that I actually felt embarrassed. "I swear to God I can hold a plank longer than this!" I scream-whispered to the trainers as my elbows buckled and I dropped to my knees. The two-pound SPRI ball made my muscles feel like I was holding a 15-pound weight . . . it was kind of insane.

After only 20 minutes, I felt as tired as I normally do after 40 to 60 minutes of strength training.

"Each exercise was exponentially harder for me and my sad muscles, who likely felt very betrayed."

You Can Do Pretty Much Any Exercise

What I find to be the most awesome about EMS training is that it's not a style of exercise, it's just intensifying whatever you want to do, so you can get more physical work done in a shorter amount of time (like I said earlier, I'm not a scientist, just reporting on my experience). So with that in mind, you can really apply EMS to anything — Pilates, yoga, stationary cycling, weight training, bodyweight exercises — you name it.

What that means is that even if you're brand new to fitness, you don't have to learn complex movement patterns to get a great workout. You also don't even have to lift huge weights (though you definitely should still work toward lifting heavy!). Someone who is older or has bad joints or limited mobility could possibly benefit from something like this, as you don't have to necessarily do plyo or any kind of high-impact exercise, but you'll still get an awesome workout.

In my case, we did a series of lightly weighted and bodyweight moves like donkey kicks, Russian twists, planks, and bridges. As mentioned, each exercise was exponentially harder for me (and my sad muscles, who likely felt very betrayed) with the stimulation than without.

I Definitely Got Sore

The next day, I felt more intense soreness in my abs. Though I didn't have the kind of soreness I get from my personal trainer (she has a Master's degree in kicking my ass), I had to remember that the EMS trainers from MetafitClub put me at a particularly low setting so I could get used to the machine. But for being a low-setting workout, I deeeefinitely still felt it.

Honestly, I loved my experience. In only 20 minutes, I got tired and sore and felt like I got a great workout in. How's that for efficient?? The trainers told me that to see results, you should be doing EMS training sessions (at 20 minutes each) twice a week. That made sense to me — no one is going to see overnight results from anything. But the soreness I felt definitely indicated that some serious work had been done in a short period of time.

Related:
A Doctor Just Infused Vitamins Into My Veins — Here's What Happened

The FDA has approved the use of these machines with trainer supervision, meaning it's (most likely, please don't sue me) not going to hurt you. Even the studies that had not-so-awesome results were more neutral than negative and didn't showcase any adverse effects.

My best advice is to try it if the technology is available to you — prices for SF's MetafitClub private sessions range from $80-$125, depending on your package and style of training. As mentioned, it's new and only just coming to bigger cities in the US, but do a little digging and see if a trainer near you offers this kind of training. You'll be shocked at the results.

by Mirel Zaman 18 hours ago