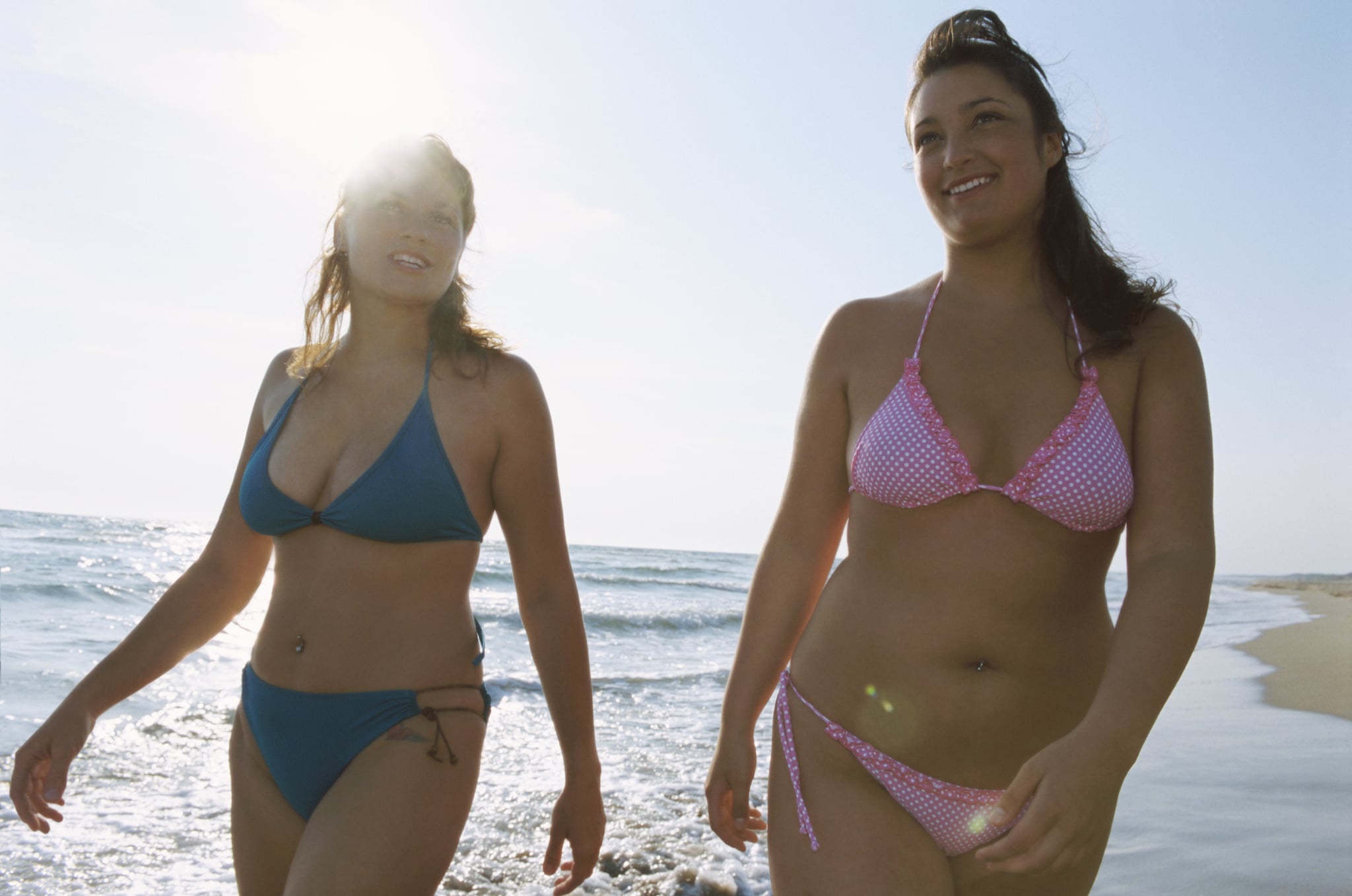 How many times have you heard the phrase "beach body" associated with Summer? I'll give you an example. Just last week while out to dinner, my mom referenced our upcoming family vacation to Hawaii. "We've got to work on our beach bodies before July," she joked over our communal mozzarella salad. Don't get me wrong, she didn't go on and on about crash dieting or hitting the gym for hours at a time. But regardless of whether or not she meant any harm (which I know she didn't), the words were said; I was bothered.

Society still has a long way to go in the terminology we use when we talk about Summer and diet culture, and two professionals in the health sphere I spoke to agree. Registered dietitian Ashley Lytwyn, MS, RDN, and Jodi Rubin, ACSW, LCSW, a certified eating disorder specialist, explained how the "beach body" concept is problematic from a physical and psychological standpoint and how we can approach the same goal in a more nourishing way.

Summer Beach Body: Why It's Problematic

Ashley, who's worked with a range of clients — chronic dieters, disordered eaters, and people with eating disorders — on improving their relationship with food, said the words "beach body" have a negative connotation and equate appearance with health, which can't always be synonymous. "We think that just because somebody has the body ideal, they're healthy, or they might think that they're healthy because they look a certain way," she explained. "But there's a huge part of that that can lead to malnourishment, nutrient deficiency, poor sleep, and poor mental wellness." It's problematic, she said, because there's no "one look" to what health is, and if people are only focused on meeting a body ideal, they may not be eating well or listening to how they feel.

Jodi, though, made it clear that societal pressures aren't the biggest factor in triggering eating disorders specifically; they're oftentimes triggered by what she calls a "perfect storm" of societal issues, familial issues, biological issues, and psychological issues. She's worked with patients recovering from eating disorders for 20 years and said that while the expectation to be "beach body ready" won't necessarily cause an eating disorder, it doesn't help. "Another way to think about that is that we're all privy to all of the pressure that society brings us," she explained. "Everything from billboards and social media and the internet and commercials and television and whatever else there is, but not everyone has developed an eating disorder, right?" According to NEDA, 20 million women and 10 million men in the US will develop one at some point in their lives.

If we broaden that to disordered eating, then Jodi said it's way more common. In fact, she suggests that having the mentality that your body isn't good enough and making buckets of "good" and "bad" food is more of a "rite of passage" when it comes to diet culture. The truth of the matter is people are going to be motivated to get more active, tone up, and lose weight as Summer approaches, but there are better ways to go about it than diving into extreme methods of weight loss. Here some things Ashley and Jodi want you to remember.

Stay Away From Cleanses and Super Restrictive Diets

Ashley actually refers to herself as a "nondiet dietitian" because she doesn't recommend restrictive diets to any of her clients. She said detoxes, such as juice cleanses, charcoal drinks, or the Master Cleanse, are a "no-no" because they can be extremely calorie restrictive. Based on her personal experience with clients, it can take two times longer for the body to heal from that deprivation and get back to a stable place. Most of these cleanses typically have little to no fiber or protein, "so you're not really getting filled with any type of nourishment," she explained. Ashley also doesn't recommend diets that cut out large food groups "because say, for instance, you cut out carbohydrates. That is your body's number one preferred source of energy. It's like taking the gasoline out of your car."

Related:
Woman to Summer Advertisements: "You Won't Be F*cking With Me This Year"

Ashley pointed out that, in recent years, we're into eliminating carbs and sugar. In the '90s, she said, we were focused on cutting fat. "Every five to 10 years, there's a new diet effort. And it's not sexy or cool to be talking about adequate nutrition." But that's what we need to do, she said.

Instead, Focus on Intuitive, Holistic Eating

Ashley encouraged intuitive eating practices, an approach that focuses on nourishment, honors your hunger, and rejects treating food as "good" or "bad." She explained, "When we shift the focus from restrictive dieting efforts and start to build that self-esteem, self-respect comes into the picture, and that really embodies adequate nourishment with food." And, when you start shifting gears mentally and develop a more peaceful, less food-shaming mentality, your body is going to "crave fruits and vegetables and balanced meals," Ashley said.

That's also a holistic approach where you eat everything in moderation. "It means incorporating fruit, vegetables, proteins, carbs, fats, salts, but also enjoying a popcorn and a soda when you go to the movies without feeling bad about it. It's not sexy. It's not quick. It's not fast," Ashley said. "It's stabilizing and it's safe and it's nourishing, so it just doesn't sell like the other gimmicky diets sell."

Be Kind to Yourself

At the end of the day, Ashley reminded us, "Looking and feeling your best comes from within. It comes from building that self-confidence and self-esteem and self-worth and value." So, be kind to yourself and be mindful of the words you're using when you talk about your health. It's important to have an internal dialogue focused on positive things like your progress and hard work as opposed to negative self-talk. Jodi actually designed a program called Destructively Fit where she educates health professionals on the ways that terminology like "beach body" can be problematic. For instance, in a fitness class, some people probably find motivation in hearing that it's "beach body time," but it can also be anxiety-producing for others, she said.

We'll be the first to say we aren't perfect; we've used this language in the past. But it's important for anyone in a position of authority in the health sphere to remember that "you don't know who you're talking to." (A reminder from us: there's no shame in zoning in on foods that are better for you like healthy fats, protein, and lower-calorie snacks, nor is there shame in wanting to shed a few pounds or get toned before Summer, but you shouldn't feel like you have to lose weight or work on your six-pack.)

Last and Final Step: Go to the Beach

"Drown out all of the noise and really remember that everybody's body is different and that there's nothing wrong with your body," Jodi concluded. "There's nothing you need to fix, there's nothing you need to change, there's nothing you need to do differently to get ready for Summer." If you want to lose some fat, build muscle, and eat cleaner, that's great, but it's not a requirement for enjoying the warm weather and the waves. No one's checking your weight before you step foot on the sand; no one's giving you a prime spot during low tide just because your butt looks extra shapely in that bikini. "I've worked with clients where this is the first time they've even considered that they don't have to do something in preparation to go to the beach. You want to have beach body? OK, have a body, number one. Number two, go to the beach. There you go," Ashley said. "You have a beach body."

If you or someone you love is experiencing signs and symptoms of an eating disorder, the National Eating Disorders Association has several resources, including 24/7 crisis support by texting "NEDA" to 741741.