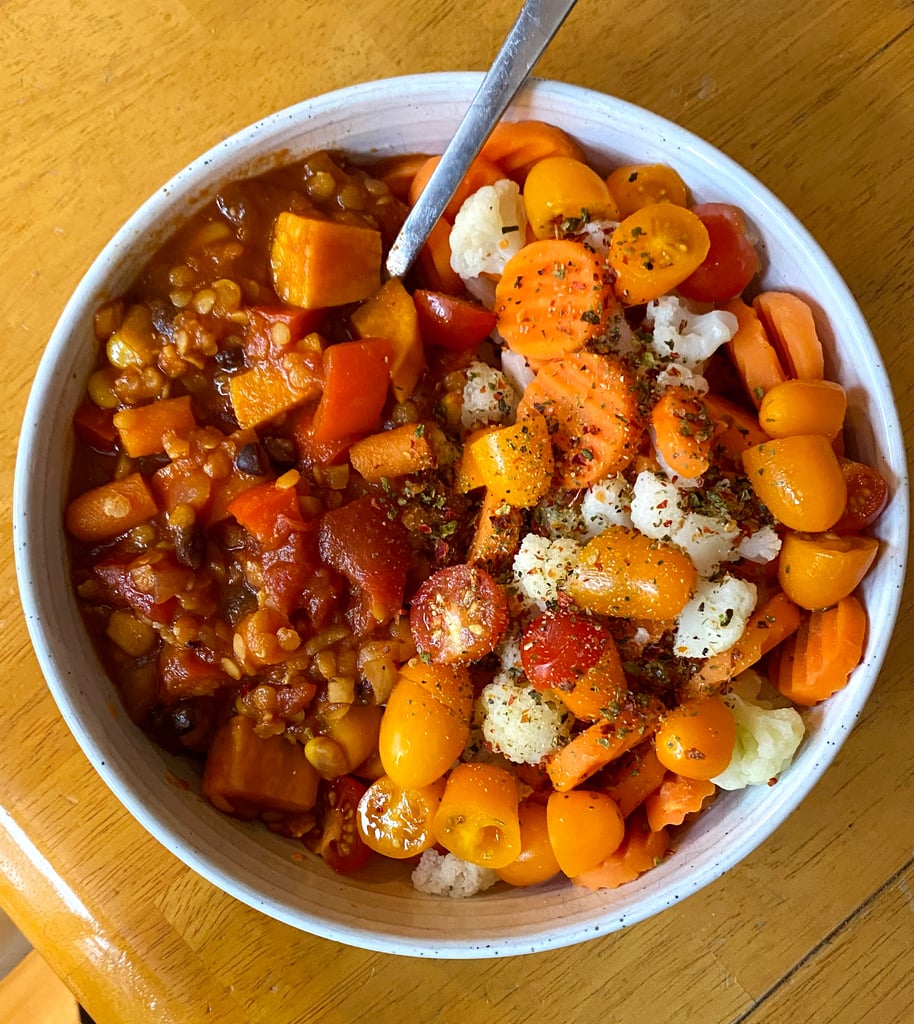 Before the pandemic started in March 2020, I was doing CrossFit four to five days a week and doing extreme forms of intermittent fasting to lose the last five pounds my body had been holding on to since my son was born eight years earlier. Spoiler alert: the restriction only made me overeat, which made losing weight impossible. During the pandemic, I was happily stress baking, but realized it only made me gain five more. But I was able to lose 11 pounds in two months without restricting when I ate and without tracking my calories; I ate a huge volume of food and never felt hungry. I used the principles of calorie density that I learned by reading Eat to Live and The Starch Solution, and by joining the Slim on Starch program.

By eating foods that are low in calorie density (have fewer calories per pound), you can fill your plate up without measuring your food, eat until you're full, and lose weight without even trying. I know it sounds like a gimmick, but it's really true! I've had such a long history of trying to lose weight since I was in high school, mostly by restricting when I ate. Now I eat whenever I want, which is at least four times a day, and I feel energized and happy! And the best part is that I can eat a large volume of these low-calorie-density foods, which makes me not even realize I'm eating in the slight calorie deficit I need to lose weight. And because these foods contain more water and fiber, they fill up my stomach so I feel satisfied for way longer than I did eating small servings of higher-calorie-density foods.

So which foods are low in calorie density? Veggies, fruits, legumes, and starches — all the good stuff! I mostly ate whole, plant-based, high-carb, low-fat foods, which I love anyway since I'm vegan. Animal products, sugar, flour, processed foods, and high-fat foods are high in calorie density, and those are the foods I limited.

Here's a basic breakdown shared by Craig McDougall, MD (son of John McDougall, MD, the author of The Starch Solution), in order from lowest to highest so you can get an overview of calorie density:

Since most of us don't necessarily measure our food in pounds, here's a list to compare the amounts of what approximately 200 calories would be for common foods.

Related:
I Stopped Eating Oil For 6 Weeks, and My Skin, Energy, and Digestion Have All Improved

Let's be clear: There are no "bad" foods and I'm not saying to never eat healthy, more calorie-dense foods like avocado, peanut butter, almonds, bread, and dried fruit, or not-as-healthy pizza, brownies, and ice cream. I'm just saying that these foods high in calorie density are easier to overeat, which is what I did, and that's why I was gaining weight.

Take a page from my weight-loss story: don't just eat the foods that are lowest in calorie density and think you'll lose weight faster. Only eating raw salads, baby carrots, and apples won't fill you up, and it'll kick your hunger into overdrive, leading to overeating. You need to balance the veggies and fruits with the starches and beans to feel satiated.

An easy way to use this information without weighing your food or counting calories is to use the 50/50 plate: half of your plate will be nonstarchy veggies like steamed broccoli, steamed kale, zucchini noodles, roasted cauliflower, or salad, and the other half will be a starch like brown rice, quinoa, oatmeal, oil-free air-fried potatoes, or baked sweet potato. You can also add a small portion of beans to your plate, which aids in satiety. If you're hungry after that first plate, make yourself another 50/50 plate and eat until you are satisfied, but not stuffed. As far as fruits go, enjoy two to three a day. I like to eat them after lunch and dinner as a bookend to let my brain know I'm done eating for that meal.

If you keep reading, you can see photos of what plates of 200 calories look like, as well as example meals I ate to lose weight. These meals were so delicious and physically satisfying. Since I haven't been eating much sugar or processed food, these whole foods taste amazing! And I love that I have a healthy relationship with food now and that I'm modeling healthy habits for my daughter by eating such a nutrient-dense diet. I'm feeling more confident and energetic, I'm sleeping better, I have better mental clarity (thank you, carbs!), and I feel more vibrant. All this because of calorie density!