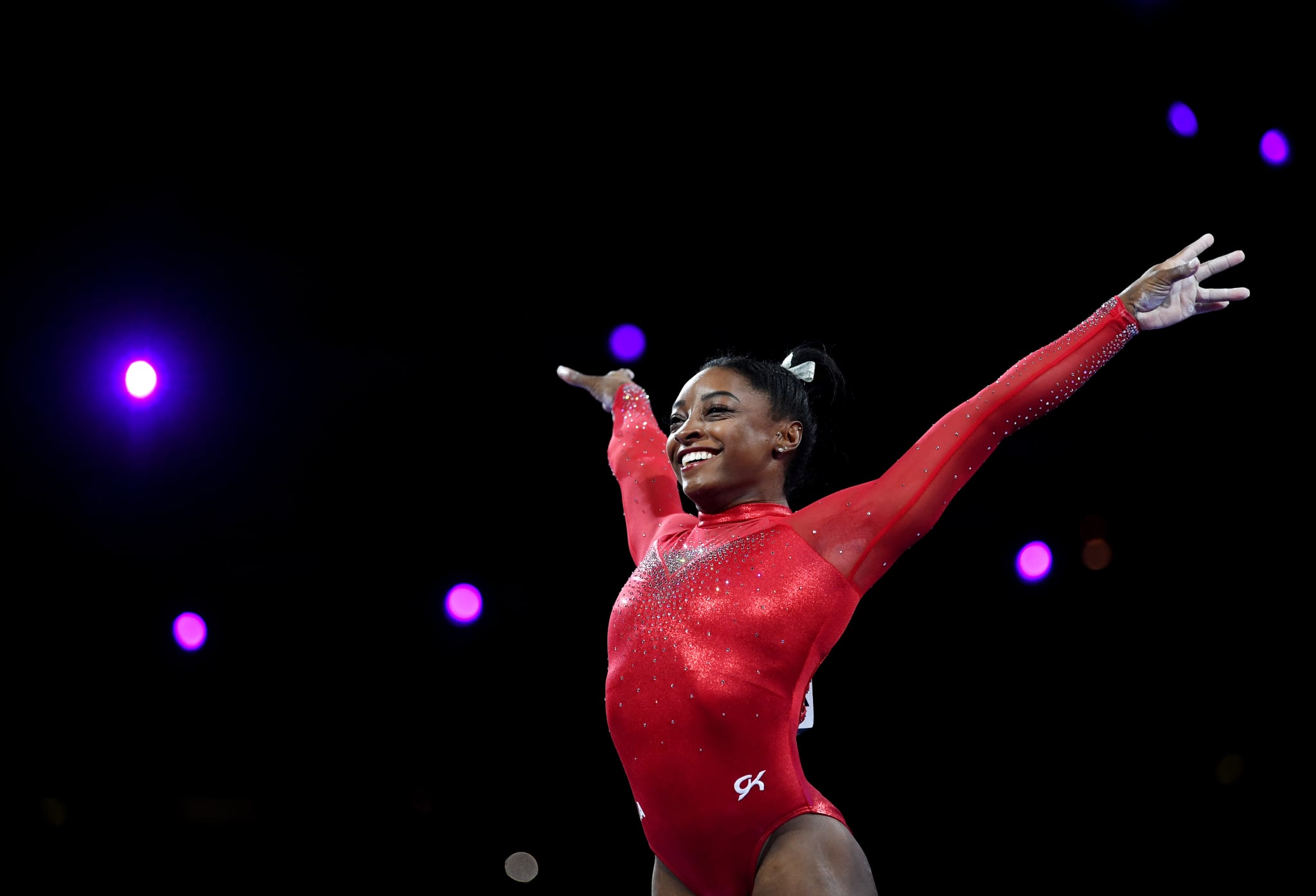 Simone Biles came into the 2019 World Gymnastics Championships having already dominated the four times prior that she'd competed (2013, 2014, 2015, 2018). Hell, since 2013, she's pushed the sport to its limit and then some, and she has a six-year all-around winning streak to prove it. But during 2019 Worlds specifically, which lasted from Oct. 4 to Oct. 13 in Stuttgart, Germany, the 22-year-old Olympian broke record after record, racking up enough medals to officially call her the most decorated gymnast in Worlds history. At the competition, she won five golds — one each on beam, vault, and floor; one in the all-around; and one for Team USA's first-place finish — which increased her World medal count to 25 and beat Vitaly Scherbo's previously held record, 23, by two.

Simone, who also surpassed her own record for most World all-around titles as well as most World medals won in women's gymnastics, told USA Today, "It's important to teach our female youth that it's OK to say, 'Yes, I am good at this,' and you don't hold back." She continued, "You only see the men doing it. And they're praised for it and the women are looked down upon for it. But I feel like it's good [to do] because once you realize you're confident and good at it, then you're even better at what you do."

Note: the US men's gymnastics team hasn't won a World Championships since 2014 (they finished fourth at 2019 Worlds). The women won their team final by almost six whole points and took home their fifth consecutive win. What's more, they guaranteed themselves a spot at the 2020 Olympics after finishing in the top three at 2018 Worlds, whereas the men's team, who finished off the podium last year, had to wait until this time around to qualify. Plus, according to NBC Sports, this is the longest the men have been without an Olympic or World team medal since a 17-year drought from the 1984 Olympics to 2001 Worlds.

"I've won five World titles and if I say, 'I'm the best gymnast there is,' [the reaction is] 'Oh, she's cocky.' No, the facts are literally on paper."

Yes, you could argue that there are a higher number of teams challenging the US score-wise on the men's side, but at the same time, the US women are just so much more blatantly dominant and consistent as both a team and as individuals (Sam Mikulak was the only man from the US team to qualify for an events final at Worlds this year, while the women had the maximum of two gymnasts qualified on each event). That's not to say that the men don't deserve credit — the stuff they do is extremely difficult and undeniably dangerous — but when you're talking about medal count and showing up to get the job done, the women deserve that recognition to the fullest, period.

Despite that difference, and as Simone pointed out, women are often called "cocky" for acknowledging their dominance. "It's not out of cockiness," Simone said. "I've won five World titles and if I say, 'I'm the best gymnast there is,' [the reaction is] 'Oh, she's cocky. Look at her now.' No," she stated, "the facts are literally on paper."

You can see the contrast in demeanor, even, just by watching elite gymnastics competitions. If you saw any of Worlds this year, you might have witnessed the Italian women's emotional celebration after winning a medal for the first time since 1950. You might have also seen Simone's mic drop in her floor routine during the all-around competition. Sure, there were many celebrations, but, in general, it's more common that men will do one of the following on the world stage once they've completed their routines: clap their hands together, producing a cloud of chalk; scream (yes, this really happens); and punch the air. (Watch one man do all three after his high bar routine!) Women typically don't react like this.

It's important to note that collegiate gymnastics is, in fact, different. Elite gymnastics has a longstanding culture on the women's side of grueling discipline, as UCLA sensation Katelyn Ohashi has openly discussed in the past. Another former elite-level gymnast, Mattie Larson, and gymnastics insiders explained to Vice News that at the Karolyi Ranch in Texas, where elite gymnasts were invited to train for weeks at a time and which has since been shut down during Larry Nassar's sentencing, girls were often frowned upon for showing emotion in the gym. On the collegiate level, you're more likely to see women celebrate their successes (just take a look at the difference between Katelyn's elite routines and her UCLA routines). But, quite frankly, women, not men, getting called out for celebrating victories or voicing opposition and/or opinions is how it is for a lot of sports.

Just this year, the US women's national soccer team was deemed arrogant for celebrating a 13-0 World Cup win against Thailand. People wanted them to tone down their excitement because praising goal after goal was "too much." Serena Williams, who Simone said was one of her favorite athletes growing up, was penalized at the 2018 US Open when she showed outrage over an umpire accusing her of illegal coaching. She then called him a thief. "I've seen other men call other umpires several things," she said at the time. "And I'm here fighting for women's rights and for women's equality and for all kinds of stuff. For me to say 'thief' and for him to take a game? It made me feel like it was a sexist remark. For me, it blows my mind."

Simone told USA Today after winning the Oct. 10 all-around finals at Worlds, "I've learned as I've gotten older that it's OK to show real, raw emotion." She went on to say that this goes for the good moments and the bad. "It also shows kids that it's OK, if you're enjoying the moment, to smile, to be happy. If you're not having a good time, it's OK, you don't have to hide that from people," she said. "Not saying you should scream or punch things. You could probably do that behind the scenes. But if you're upset, you can show that you're upset."

And Simone wants to encourage young athletes, especially girls, to not only celebrate their victories in full, but to also recognize that their confidence is not cocky. Bringing up accomplishments, too, shouldn't be so taboo. She has every right to talk about her achievements. An internationally qualified gymnastics judge even told us that no one in the sport can reach Simone's level of greatness at this point. But you don't have to be a judge or a former gymnast like me to see that — look at her history-making moves, look at her scores, look at her medals, look at her. 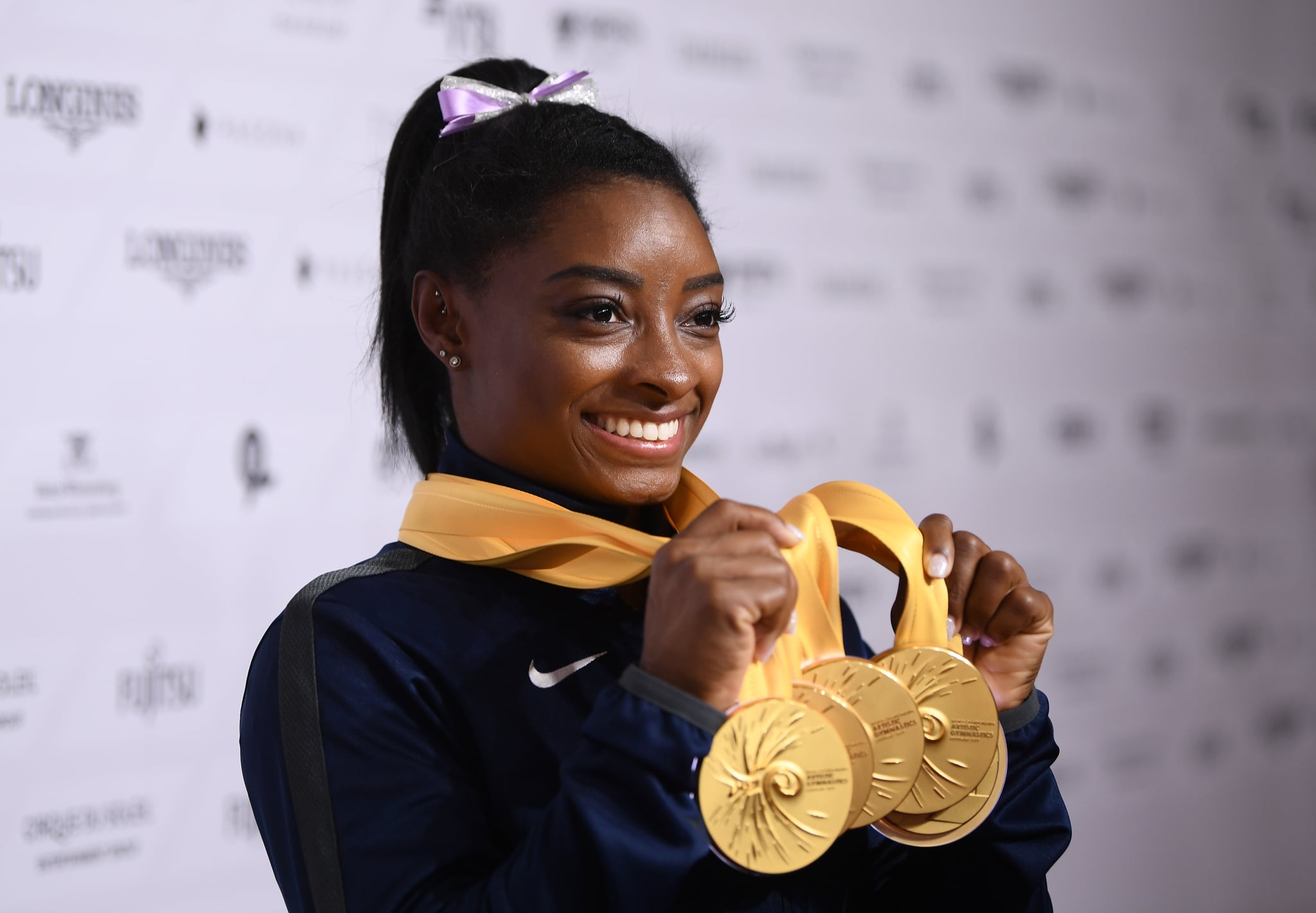