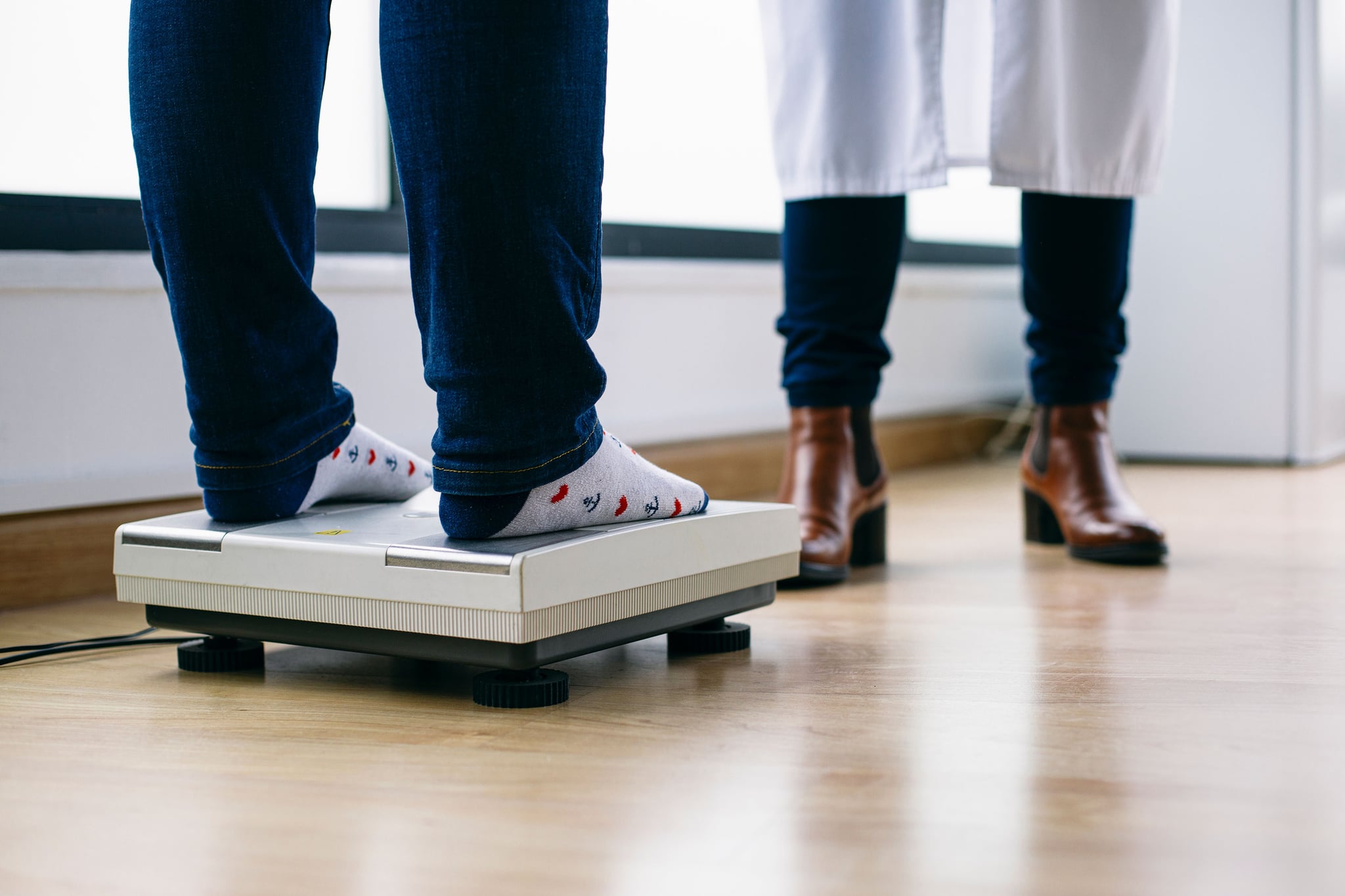 Weight stigma, also known as weight bias, often affects those with large bodies, but it can also impact people who are thin. With the help of experts, we wanted to delve into exactly what weight bias is, how to advocate for yourself if you're experiencing it, and how to check your own weight bias.

What Is Weight Bias?

Weight bias is discriminating against or stereotyping someone because of their weight, explained registered dietitian Brianna Theus from The Celestial Life. It's frequently channelled toward people who are of a high weight, but can also happen to people of all weights and sizes, explained BACP-accredited eating disorder therapist Harriet Frew, MSc. This is often seen on social media; however, it can happen in many different settings including jobs, schools, and in healthcare.

What Are Some Examples of Weight Bias?

Someone who is of a high weight may not be taken seriously by their doctor when going for an issue not related to weight, said Frew. The doctor may unfairly blame weight as the issue when this is really just weight bias.

Or a "person experiencing all the eating disorder psychopathology symptoms of anorexia nervosa may not receive treatment for this illness if their BMI is above a certain number," Frew sad. Although the person may clearly be unwell and struggling with an eating disorder, they may not be unable to get help due to weight bias.

Another example: it's often assumed that someone who is thin has self-control, is morally superior, takes care of themselves and is more successful. If you don't meet this "ideal," then you are thought less of, Frew explained, and this too, falls under weight bias.

Things like BMI (the measure of your body fat based on your weight in relation to your height), the idea that thinner is better, and diet culture in general reinforces the idea that being fat is "bad" and being thin is "good," Theus explained. "It basically says you can't live a healthy life until you are at an 'acceptable' weight. Who deemed these weights acceptable? The BMI chart does not take into account someone's bone density, muscle mass, racial differences, and more," Theus said.

The BMI chart is problematic because it doesn't differentiate between body fat and muscle mass, so a healthy person who lifts weight and is very muscular may be characterized with a high BMI, labeling them overweight. Likewise, someone can also have a low weight that characterizes them as having a normal BMI, but they could have a health issue such as an eating disorder or high cholesterol — BMI just doesn't give healthcare providers the big picture about health.

Weight stigma can have damaging physical and psychological effects, Frew said. It's a risk factor for depression, poor body image, and low self-esteem. The cultural ideal that encourages the pursuit of thinness can then drive behaviors such as strict dieting, obsessive exercise, and disordered eating habits like purging, Frew said.

Someone in a large body may constantly hear insults about their weight. "This can continue echoing in their heads until they internalize it and start to feel the same way about themselves," said Theus. She added that this can increase depression and anxiety, causing yo-yo dieting, binge eating for comfort, or other mental illnesses that could put a person's life at risk.

How Does Weight Bias Impact People and the Healthcare They Receive?

"Studies have demonstrated that patients with excess weight get less time with their physicians, present with symptoms that are more likely to be dismissed, and are more likely to be perceived as less disciplined and non-compliant," explained Eduardo L. Grunvald, MD, FACP, medical director at UC San Diego Weight Management Program.

"I have seen firsthand doctors telling a patient in the hospital that the condition they have is due to their weight when there is no correlation whatsoever," Theus said. She went on to explain that if you are at a high weight and you go to the doctor or hospital for any reason, the number one suggestion from a lot of healthcare workers would be for you to lose weight. And then the problem you initially went in for continues, and you never receive the care that you need and deserve, which could have catastrophic results.

On another level, Dr. Grunvald added that patients at a high weight may feel uncomfortable going into a doctor's office with equipment and furniture not suited for a large person. These are just a few of the reasons why he said people in large bodies often avoid the doctor's office.

Is Being at a High Weight Unhealthy?

I mentioned to Dr. Grunvald and Theus that many healthcare professionals push the idea that being at a high weight causes health issues, such as high blood pressure or risk of heart disease, and asked if it was true. Dr. Grunvald responded that this isn't a simple question, and explained that generally as weight increases, there is a direct relationship with problems that adversely affect many body systems, but added that everyone is different. There are a range of factors that can cause health issues that don't include weight. He said, "Some folks develop metabolic disease at lower weights, depending on genetics, fat distribution, lifestyle factors, and racial background. For some, they suffer from more biomechanical issues."

"It is 100 percent possible to be fat and healthy."

Theus explained that a person's weight is often the first thing that's looked at if they tell a healthcare provider they have a health issue. It's assumed that since they are at a high weight, it means they also have a host of other issues like diabetes or heart disease.

While it's true that someone who lives in a large body can have health issues like heart problems or high blood pressure, someone who is thin can also have the same medical complications. "Just because someone is fat does not mean that they are unhealthy," Theus reiterated. "Some people have mild excess weight without any problems at all," Dr. Grunvald added, which means, as Theus said, "It is 100 percent possible to be fat and healthy."

There are numerous studies proving that weight and BMI are poor predictors of disease and longevity. One such study discovered that when you compare different levels of BMI in what they categorized people as being underweight, overweight, and obese, being overweight (BMI 25 to less than 30) wasn't associated with an excess of mortality. Another study actually showed that patients they categorized as obese or overweight were at a lower risk of cardiac death than patients who were categorized at a "normal" weight. Even patients described as obese and overweight with a history of chronic heart failure were associated with a lower risk of mortality, a term called obesity paradox.

To drive home the point, in a study comparing the Health at Every Size (HAES) model to a diet approach, both groups initially had similar improvements in metabolic fitness, activity levels, psychological measures, and eating behaviors, and only the dieting group lost weight. But two years later, the dieters regained the weight (since the diet wasn't sustainable), and lost the health improvements, while the HAES group maintained their health improvements.

This proves that while weight can affect health, there are other factors that can also have an impact. Dr. Grunvald said, "as physicians, we have to incorporate all the data at our disposal to make a decision regarding the health risks to an individual patient."

How to Check Your Own Weight Bias

"Weight stigma is dangerous and it is important to check your bias," Theus said, which means: develop awareness about your own beliefs, thoughts, and assumptions, and be prepared to question them, Frew said. Make sure you're not discriminating or judging someone based on their size. Even well-intentioned comments can be harmful, like telling someone they look great because they lost weight. You never know if the person is engaging in unhealthy or disordered eating or exercise habits to reach that weight. Or they could be physically ill, and weight loss is a symptom. "Remember that you can't measure someone's health by their weight," Theus said. There are so many other ways to connect with someone or offer a compliment that has nothing to do with appearance.

Get educated, Frew said. Read up on Health at Every Size and the body acceptance movement. Notice when you experience weight bias around you and be prepared to speak up and challenge old attitudes. "Remember that every single body deserves respect and compassion," Frew said.

Related:
Here's How I'm Trying to Save My Daughter From the Body-Image Issues That Scarred Me

Also be mindful about the negative comments you make about yourself and who might be hearing them. If you talk about how you shouldn't eat certain foods or how you need to lose weight, especially around children or other people, it spreads the message that large bodies are "bad," and that's not true. It can inadvertently cause others to think badly about their own size and make them engage in harmful habits to shrink down. Be kind to yourself and talk to yourself the way you would to a loved one. Ending what NEDA calls "weight hate" can start with you.

If you or someone you know is struggling with an eating disorder, National Eating Disorder Association (NEDA) has resources available including a 24/7 helpline at (800) 931-2237.

Health
The Low-Oxalate Diet Isn't For Everyone, Experts Say. Here's What To Know
by Korin Miller 34 minutes ago

Pregnancy
Is It Safe to Take Allergy Medication While Pregnant? Experts Weigh In
by Devan McGuinness 2 hours ago

Health
What Is the "Kraken Variant" of COVID-19?
by Alexis Jones 6 days ago