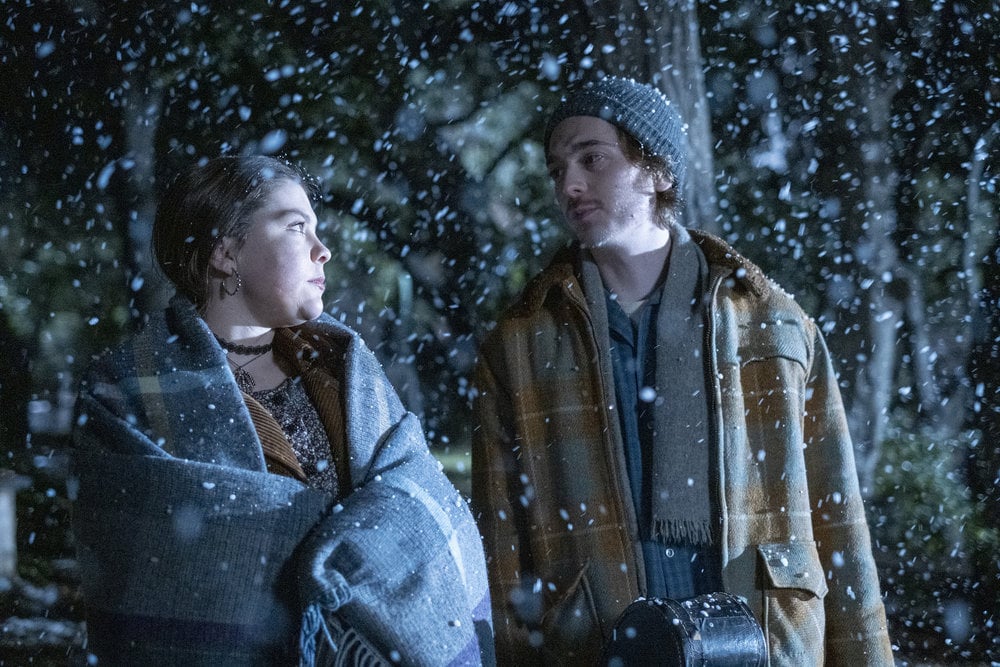 Years ago I was in an emotionally abusive relationship. It's almost weird to write that down in words, because it's not something I ever talk about. But after seeing teenage Kate's (Hannah Zeile) relationship with Marc (Austin Abrams) in This Is Us, I had horrifying flashbacks of days gone by when I thought I was in love but instead was trapped in a relationship that still haunts me five years later.

In the Feb. 11 episode of the show, we see Kate's relationship with Marc really come to a head. But it wasn't until the moment he screamed that he didn't want to see her "fat face" as he drove off and left her on the side of the road that my old relationship came pouring over me. I see a lot of myself in Kate, not even just with this relationship. Like me, she was very close with her dad growing up and completely idolized him. She struggled with her weight and fitting in with the other girls her age. Her best framework for a relationship was her parents, who were undeniably in love, and that's all she wanted too. And Marc was the first boy who gave her the attention that she so desperately wanted.

I, too, had a Marc of my own at one point. He was cute and cool and was the first boy to tell me he loved me who I actually believed. In high school and college I didn't really date because I also struggled with my weight and fitting in and feeling confident in myself, but when my Marc came around (we'll call my ex Mike), I thought my life couldn't possibly get better.

An emotionally abusive person will take that insecurity and beat you with it, because they know that's what will hurt the most.

Everything started off fine, or so I thought. Younger me didn't understand that teasing me about other girls he was seeing or telling me what I should eat were red flags. I laughed them off because even though these other girls liked him, he came home with me every night, so I won. I didn't win, though, because even though Mike gave up the other girls and told me he loved me, in the next breath he would tell me that I should probably lose 10 pounds and shouldn't hang out with my friends that weekend because he'd rather I stay home with him.

I never knew emotional abuse was a thing. It wasn't until close to the end of my four-year relationship with Mike that I realized how damaging that his control over me was to my entire being. He always made comments about what I was eating (and claimed it was because he knew I wanted to lose weight) and even told me once that he would break up with me if I didn't lose weight. He tried to keep me from hanging out with my friends (who all hated him because they could see what I couldn't), because he "wanted me all to himself." He criticized how I spent my money because he thought things like concerts and new shoes were irresponsible (he didn't work at all). He made me feel guilty if I'd go visit my family in another state, because he refused to go and thus had to stay home alone. His words actually got so emotionally draining toward the end of our relationship that I would make any excuse I could think of just to get out of our apartment, and that's why I took up running.

But Marc's comment to Kate on This Is Us about her "fat face" is what broke me. I know Kate. I am Kate. Her weight is her biggest insecurity, just like it is mine. And an emotionally abusive person will take that insecurity and beat you with it, because they know that's what will hurt the most. That's why Mike criticized me about what I ate, and that's why every time our fights got out of control, the insult he immediately hurled at me was something about my weight. But these emotionally abusive people are also supremely manipulative, and that's how they get us back every time. Mike would apologize and cook me dinner, just like Marc came back to pick up Kate with a blanket and an apology.

Related:
I’m a #MeToo Survivor, and I’m Still Afraid of Being in a Committed Relationship

I never thought I'd be a person who would find myself in an abusive relationship of any sort. If you'd ask my best friend, she'd tell you that before Mike I was strong, bubbly, and confident. But after even just one year with him, I was a shell of the person I used to be. I was quiet, I was reserved, and I had no spirit. Mike honestly broke my spirit. And I hoped that once I got myself out of this relationship that I would turn around and go back to who I used to be.

But I've never been the same.

It's been five years since I ended that relationship, and I still don't date; I'm so terrified that I'll clam up around any guy because it's so drilled into my head that I need to lose weight and stay away from my friends and devote all my time and attention to my boyfriend. But while I still feel a pit of sadness in my soul over this relationship and how much it's affected me, I'm proud of myself for putting my foot down and getting out before it got any worse, and I can truly say I'm happy again. I just wish it was easier to tuck it all away and move on, but some things just stick with you forever.