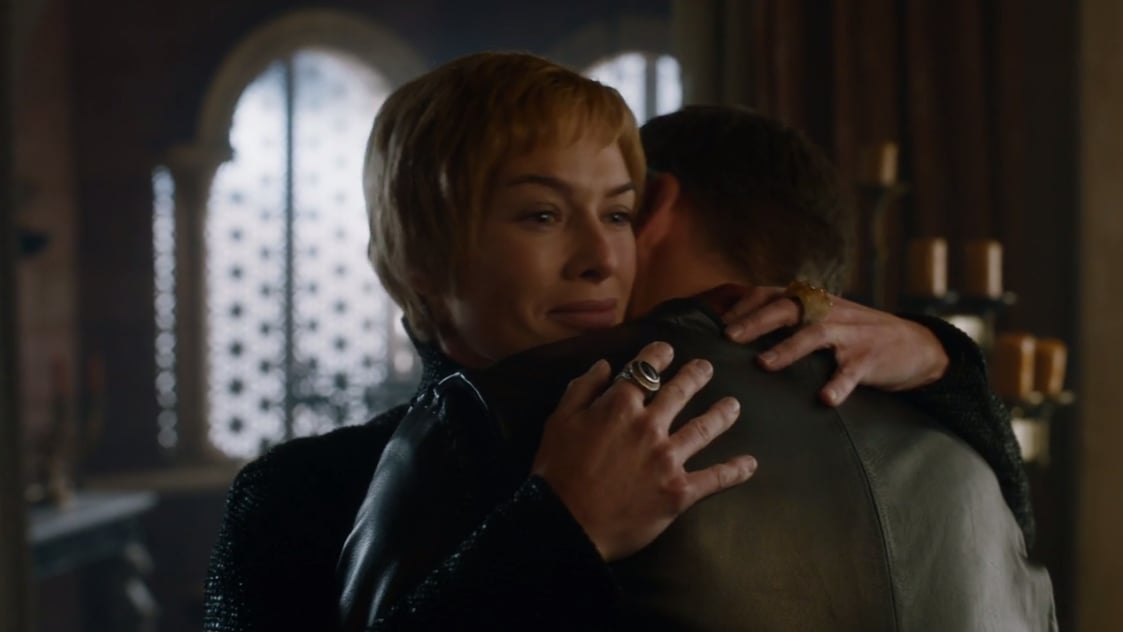 Sometimes you can see a Game of Thrones twist coming years before it actually happens. Come on . . . was anyone really surprised when Jon Snow's parents were revealed in season six? Cersei's pregnancy is not one of those twists. In Sunday night's episode, "Eastwatch," Qyburn confirms Cersei is pregnant and tactfully offers her something to deal with the issue, but she declines. Does that mean Cersei is really expecting again? Almost certainly, but it may not be good news for the queen.

There is a palpable shift in Cersei's attitude in this episode. She actually allows her little brother Tyrion into the castle to meet with Jaime, and she is entertaining the thought of speaking with Daenerys. Suddenly, Cersei sees a future for herself and Jaime that is a happy one. The joy on her face when she tells Jaime the world will know he's the father of her child is real. After losing her three children, the Lannister Queen now has a reason to hope for a new beginning, but allowing herself to hope could be her downfall.

Maggy's prophecy still looms over Cersei's story. The wood witch from season five promises a young Cersei that she will have three children and "gold shall be their crowns and gold their shrouds." The deaths of Joffrey, Myrcella, and Tommen all come to pass just as Maggy predicts. There's no mention of a fourth child, which suggests Cersei will not carry this baby to term. That begs the question: why bother making Cersei pregnant at all? And the answer is simple enough: to finally push her fully over the edge.

Ever since she blew up the Great Sept of Baelor, fans have been predicting that Cersei would become the Mad Queen. So far, she's been stable enough. She certainly wants to destroy Daenerys's army, and her goal of uniting the realm to make sure the Dragon Queen doesn't take her position of power remains her focus. All of her interactions with Jaime suggest she wants to build a world where no one can tell them what they can and cannot do anymore. They are lions, after all, and she's heeding her father's advice about not worrying about the opinions of the sheep. As ruler of the Seven Kingdoms, she is finally in a position in which she doesn't have to answer to anyone, and that's all Cersei has ever wanted.

Now that she has a new baby on the way, Cersei has even more of a reason to seek peace with Daenerys. In her mind, she can finally have a happy ending, but if that beautiful image in her head is destroyed, so will be the last vestiges of her humanity. Right now, Jaime and the baby are keeping her grounded. But if Jon succeeds in bringing a White Walker to King's Landing, then Jaime may be inclined to join the fight to stop the fall of Westeros. Cersei doesn't warn her brother never to betray her again for no reason. One way or another, Cersei seems destined to lose Jaime, and this reality compounded with a miscarriage could push her over the edge.

Her children are everything to her, and she has yet to truly grieve over Tommen. Losing a fourth child could be her undoing and lead to the birth of the true Mad Queen. If Cersei's hope for the future is crushed, then she will be more than happy to watch the world burn around her. In fact, she may once again light the match.

Red Carpet
The Story Behind Maude Apatow's "Euphoria"-Like Outfits, According to Her Stylist
by Sarah Wasilak 8 hours ago