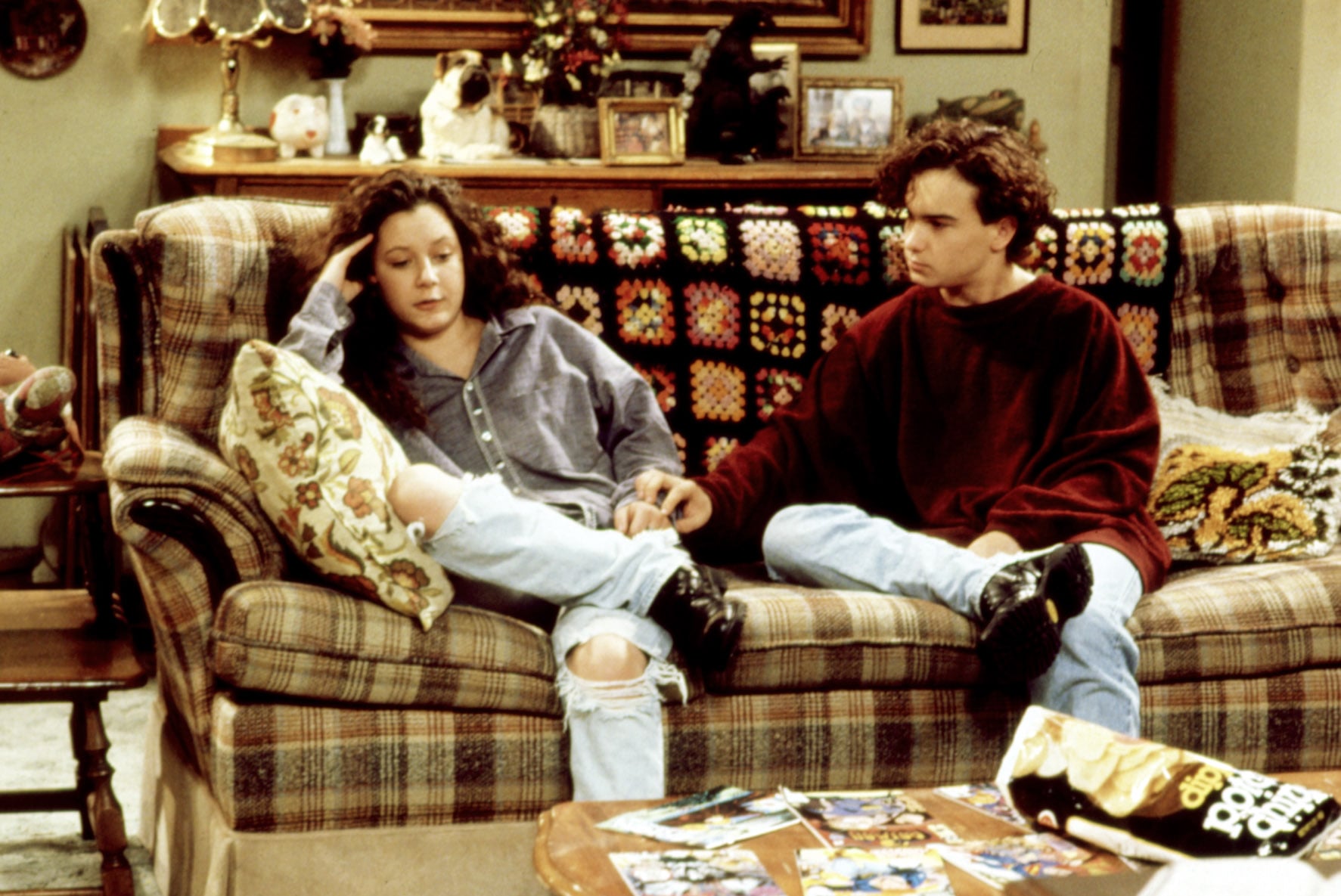 The dramatic and discouraging phrase is often used in response to the unexpected de-coupling of a relationship, either fictional or IRL. You may have seen it on your Twitter feed in response to the recent news about Zayn Malik and Gigi Hadid splitting, or during Tom and Abby's on-again, off-again romance on Netflix's Queer Eye (relax, they're engaged now).

It will likely also be something audiences think about when they tune into the new season of Roseanne on March 27, because, brace yourself: David (Johnny Galecki) and Darlene (Sara Gilbert) will be broken up. Now, for Roseanne fans who've followed the hit show's nine season run, this might come as a disappointment. But . . . is it? Why are we so surprised? And what's more, why are we so invested in relationships portrayed on television?

In the case of Darlene and David, their short marriage starts with a laundry list of odds stacked against them. The couple first meet in season four, when both the teens are only 15-years-old. Rooted in a friendship and a shared interest in creative writing, Darlene and David's relationship mirrors that of Darlene's parents. Darlene is outspoken, independent, and controlling, just like her mother Roseanne (Roseanne Barr). Meanwhile David is more passive, similar to how Dan (John Goodman) tolerates Roseanne's wise cracks and criticisms. This dynamic might work for the Conners, but it causes conflict for Darlene and especially David, who grew up with an abusive family.

Related:
The Roseanne Reboot Has Officially Been Renewed For Season 2

While the couple does break up on three separate occasions, Darlene and David still have a tendency to move their relationship way too fast. David moves in with the Conners in season five instead of living with his abusive mother. The live-in situation only complicates things more between them when Darlene starts attending a college David didn't get into. During one of the breakups, Darlene decides to leave David so they can have the opportunity to date other people. In retrospect, this makes sense: they lost their virginity to each other and were the only people they'd been with both romantically and sexually. This break up, of course, is temporary, and instead the two get married at the age of 19 after discovering Darlene is pregnant. The announcement causes a huge rift for the Conners, who don't want Darlene to go down the same path as Roseanne and Becky (Lecy Goranson), Darlene's older sister.

Though every relationship has its own hardships, Darlene and David's relationship is, by all accounts, pretty realistic, especially their reasons for splitting up so many times. While, yes, high school sweethearts do exist, it's still important to remember that sometimes couples can't withstand everything life throws at them. That's just fine. They had a good run. Because we follow these characters on television season after season, we hurt when things like Rachel not taking Ross back in Friends happen, or when Topanga breaks up with Corey in Boy Meets World for lying about kissing another girl. However, we need to take a step back and really evaluate why we feel this way — is it because we actually believe these fictional couples should stay together, or is it because we want so badly to believe that the best things in life don't have expiration dates.

Love isn't dead. In fact, it's more alive than ever. Characters like Darlene are replacing romantic relationships with something more gratifying: self-love. They're putting themselves and their needs before anything else, even before relationships built on years of comfort that aren't making them happy anymore.

We still don't know yet whether Darlene and David will have a big romantic reunion in the new season save for one confirmed episode (David's overall absence in the nine-episode installment is rumored to have been because of scheduling conflicts with The Big Bang Theory, on which Galecki stars). I think it's only fair that we applaud the writers for keeping their story as realistic as the TV gods will allow them. We need better examples of relationships that aren't written for the sole purpose of pleasing an audience but to teach us that love is far more than a meet-cute or wedding episode.