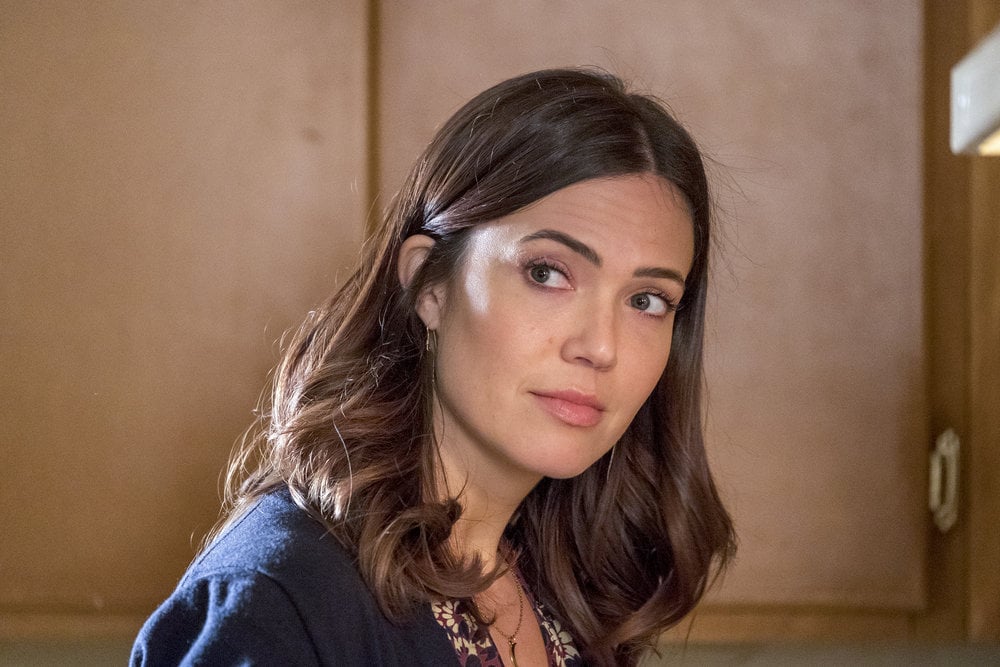 This Is Us is known for its shocking twists, but the ongoing mystery surrounding the "her" in the flash-forward might end up being its most dramatic twist of all. After teasing the "her" at the end of season two, we've slowly begun to get more details during season three, including who exactly everyone is going to visit. While many thought older Randall and Tess were visiting Beth, it was later confirmed that the "her" is none other than the Pearson matriarch, Rebecca. So now that we know the "who" to the mystery, our next question naturally is "what" happened to Rebecca?

I recently sat down with Mandy Moore for her partnership with Nature's Way on Feb. 4, and tried my best to get to the bottom of this mystery. While she wouldn't reveal any spoilers, she did confirm that she does know what happens to her beloved character, and honestly, it sounds like it's going to crush fans. "In typical This Is Us fashion, it is true to life," she said about Rebecca's fate. "But it costs a lot. It's going to be a lot for people to digest emotionally, but it's real."

"It's going to be a lot for people to digest emotionally, but it's real."

Seeing that the flash-forward is the show's final timeline, fans can't help but speculate that Rebecca will eventually die. There have been a few hints about her fate in past episodes (including her past brain cancer scare and her chronic body pain), and as we know, the writers of the show never do anything by coincidence. Beth's pin the tail on the donkey game in the flash-forward could even be setting up the show's final story as the Big Three come together for one last birthday with their mom.

While This Is Us hasn't officially been renewed for season four yet, Moore already has a good idea of where the show would go after this season. "I think they're just trying to figure out at this point — I hope I'm not speaking out of turn — but what I've heard is they're just figuring out how many more seasons are going to pick up and I think they're going to announce it all at one time," Moore said about the show's renewal. She added that the show's creator Dan Fogelman has also been very open with the cast about his vision for the series. "We've been told pretty much what happens next season and we know how the show ends, so it's just whether or not it's five or six seasons is what they're deciding on right now," she explained.

Related:
Why Is Everyone Going to See Rebecca on This Is Us? 5 Possible Theories

Despite what she already knows about a potential season four, Moore added that she really hopes we learn more about Rebecca and Miguel's love story in coming episodes. "I love Jon Huertas. He is the unsung hero of our cast," she said of her costar. "He is so funny. He's so charming and winning. And I feel like Miguel has gotten a raw deal because people are like, 'But he's not Jack.' And it's like, 'Of course he's not, but that doesn't lessen their — they have a connection.' They're both entitled to have found one another and have companionship and have a relationship. Their life shouldn't be over just because he got divorced and her husband passed away. It's, again, very true to life. They should celebrate finding each other and being able to support one another after such a loss."