Ah, the simple joys and sucker-punching whims of parenthood. So many sleepless nights. So many half-watched movies and buttery popcorn that turns stale in the bowl. So many episodes of having your hair yanked in Target, wiping slobbering mouths, and being kicked in the shin while stirring the meatballs. You've got the infant with its Guinness World Record-level blowout diapers. The tyrannical toddler who empties every cabinet in your house, darting across the floor, naked, refusing to be potty-trained. The defiant middle schooler who thinks slamming doors is a world-class sport. But here's the most baffling conundrum of all: There is almost always another parent on the sidelines, judging you, striking you with a condescending side-eye, reminding you of your ineptitude. Of how their choices are superior. How you're doing it wrong, or missing a step, or perhaps not martyring yourself hard enough. How they've got it so much more figured out than you do.

I wasn't exactly prepared for it to be this way. When I became pregnant with my daughter two years ago, after shuffling through four crushing years of infertility, I felt like I'd been freed from the darkest room I'd ever lived in. For so long, I'd observed my mom friends with glassy-eyed longing. Infertility felt like being locked out of the party of the century, Great Gatsby-style, my nose pressed against the window, watching everyone toast to the gleeful madness of it all. It was a club I fevered with desire to join. But once I was granted access and found myself inside, there were some shadowy corners I never expected to stumble into. Suddenly, I was living my dream reality, except it was sprinkled with Mean Girls. The kind who carry diaper bags.

Don't get me wrong; this isn't the complete story, of course. I've encountered droves of compassionate and supportive parents who've welcomed my husband and me to their table — showering us with heartwarming gifts and offering exuberant pep talks. My closest mom friends have been an invaluable sounding board, and I've gotten more knowing grins and sympathetic nods from strangers than I could mention. And, when in the trenches of colic, a band of angels landed in my email inbox with loving words of encouragement and a promise that the days of tribulation would end, one of whom advised, "When you need a break, hire a sitter and ignore the mom guilt." But what I wasn't expecting was the pretentious breed of club members who act as though they govern it. The ones who seem to have appointed themselves as parental hierarchy. Because they've gotten the idea that parenthood should only ever look one way — their way.

Related:
PSA: If You See a Kid in a Full-Fledged Meltdown, It’s “Likely Because of Great Parenting”

With parenthood, there are never not difficult decisions to make, because being the steward of another human's development and safety is no weightless plight. And no matter what your instincts say, you're sure to ring somebody's alarm.

While at a holiday dinner party last year, I was chatting with a fellow girl-mom. She was someone who had delivered pans of mouth-watering dinners to my home after I'd given birth and been generous with doling out invaluable advice — occasionally filling my text messages with emergency Amazon links after the most sleep-deprived of nights. I hadn't known her long, but I thought she was helpful, hilarious, and lovely. While swapping our holiday plans over glasses of wine, we stumbled upon the subject of mom-shaming. "I just don't get why some moms leap at the opportunity to judge other moms. As though it's a guilty pleasure," I told her. "Oh, I'm one of those. I will judge you," she announced, her gaze instantly stiffening. "I will bring you food, and help you out, but I will judge you," she added, her gorgeously groomed eyebrows jerking into an arched position, as though I should heed her warning. I stared at her inquisitively, stunned and wondering who I was talking to. And, with that, her sweet expression resumed its usual position, as though it had been zipped back up and smoothed out in haste — her alter ego neatly stowed away until next time. "Well," I thought, "therein lies the problem."

With parenthood, there are never not difficult decisions to make, because being the steward of another human's development and safety is no weightless plight. And no matter what your instincts say, you're sure to ring somebody's alarm. For instance, day care. If you're a single mom trying with all of your might to keep your kid's favorite cookies and soups stocked in the pantry, then most would agree that day care is essential. But if you're a mother who chooses to work, not out of necessity, but out of the desire to champion both a career and raise ambitious, well-traveled children, sending your baby or toddler to day care will almost certainly trigger another mom in your circle. "I could never let someone else take care of my kid," she might snicker. Except you're not talking about their life or their kid.

And then there's breastfeeding. Perhaps it was never the magically intuitive process that some moms gush about, and you're thankful to live in an era where formula is a perfectly acceptable substitute. You might sense the random mom scoffing at your decision or perhaps pressuring you to change your mind. To which you might feel inclined to say, "I'm sorry. I didn't realize that how I choose to feed my baby is your business." And wait, there's more. Let's say you did breastfeed and grew to embrace it. A pretentious parent might sneer at your almost-toddler nestling cozily at your breast, warning, "When they can start asking for it, it's time to stop. Because . . . that's so weird." Even though they might be sipping a latte swirling with milk that was squeezed from a cow's boob. And whose baby is it, anyway?

And the list goes on. Screen time? You better turn off that television, because they've got pages of evidence for how it'll screw up your child. Choose to vaccinate — or not? Depending upon their stance, you might get a condescending squint. And if you really strike a nerve, you might inspire a Facebook rant. Having a crummy day and lost your cool? You don't have the right to blow off steam. Yeah, because they've probably never hit a breaking point of any kind. Cosleep? Oh my God, how irresponsible. They'll fill Instagram comments or message boards with paragraphs about how your decision is the worst. Like, you can't sit with us.

The pretentious parent is identifiable by the way they make you feel, which is judged. Inferior. Scrutinized. Because, whether their kids are nearly grown, still swinging from the monkey bars, or dropping atomic bombs in diapers, their way is better, smarter, faster. They know more, and you'd be wise to listen. And if you don't align with their stance, they might take it upon themselves to try to fix you. At worst, you might get tossed into their burn book. Even though there are probably a thousand missteps you and others could so easily judge them for. Because every parent has made them.

This is what I know: Being a mother is the most extraordinary honor of my life. Whether it's teaching my daughter the ABC song or how to high-five, it's an inimitable privilege I don't take lightly. I'm so deliriously in love with every inch of her chubby feet and button chin, I miss her the minute I put her to bed. And when she smiles at me with her tiny mouth packed full of teeth, the heavens part, the angels sing, and time stops. I don't know how I ever lived without her. But you know what? Some days are next-level hard. And on the worst of them, I may or may not fantasize about slipping out of the back door and running in the cold, pounding rain — far and away from being clawed and slapped and summoned while stirring the spaghetti sauce. Free from chopping up bananas that I'll inevitably have to scrub from the floor and refilling sippy cups and wrestling with what feels like a baby bull while trying to wipe poop from her butt. OK? 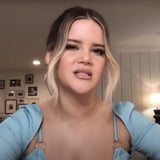 Maren Morris on Mom-Shaming From Fellow Mothers: "It Obviously Comes From a Deep Insecurity"

The truth is that, as parents, we're all sort of traveling down the same disorienting freeway, having a destination in mind but mostly winging the trip. Sure, our backgrounds and experiences may vary greatly, but we all have similar goals: we love our kids and want the best for them. But no matter who we are or how we do our job, sometimes we run out of gas. And it's always nice to be extended grace.

Perhaps we're all trying our best, in the best way we know how, and when we're harshly judging each other, we're almost certainly missing a world of information.

And so, I think that instead of blaring our horns at each other and cutting each other off, maybe we could give each other the benefit of the doubt. Like considering that, hey, maybe that flustered mom in the car line has no choice but to be that way. Maybe she's working full-time and feeding two hungry mouths with no partner to help — perhaps living for her bed, and a book, and a half-hour of delicious silence at the end of every evening. Maybe cosleeping is the only way anybody gets rest in that person's home. Perhaps we're all trying our best, in the best way we know how, and when we're harshly judging each other, we're almost certainly missing a world of information. Because one person's truth is never the next person's truth — not in love, not in politics, and certainly not in parenthood. So, hey, whatever the situation or plight, except in threats of danger, it's nobody's business how so-and-so raises their kids. Nobody's business except their own.

So, perhaps you've got a few pretentious parents in your orbit. Raise your hand if you've ever felt personally victimized by one. I know I have. But what I've learned is that it's an epidemic of projection. The person they are judging most of all is themselves. I know this because I, too, have tumbled into that snobbish venue on occasion, unfairly scoffing when another mom's action makes me feel insecure or uneasy. And I think it's important to call myself out on it. Because, otherwise, that would be, like, totally pretentious of me.

by Alicia Geigel 47 seconds ago