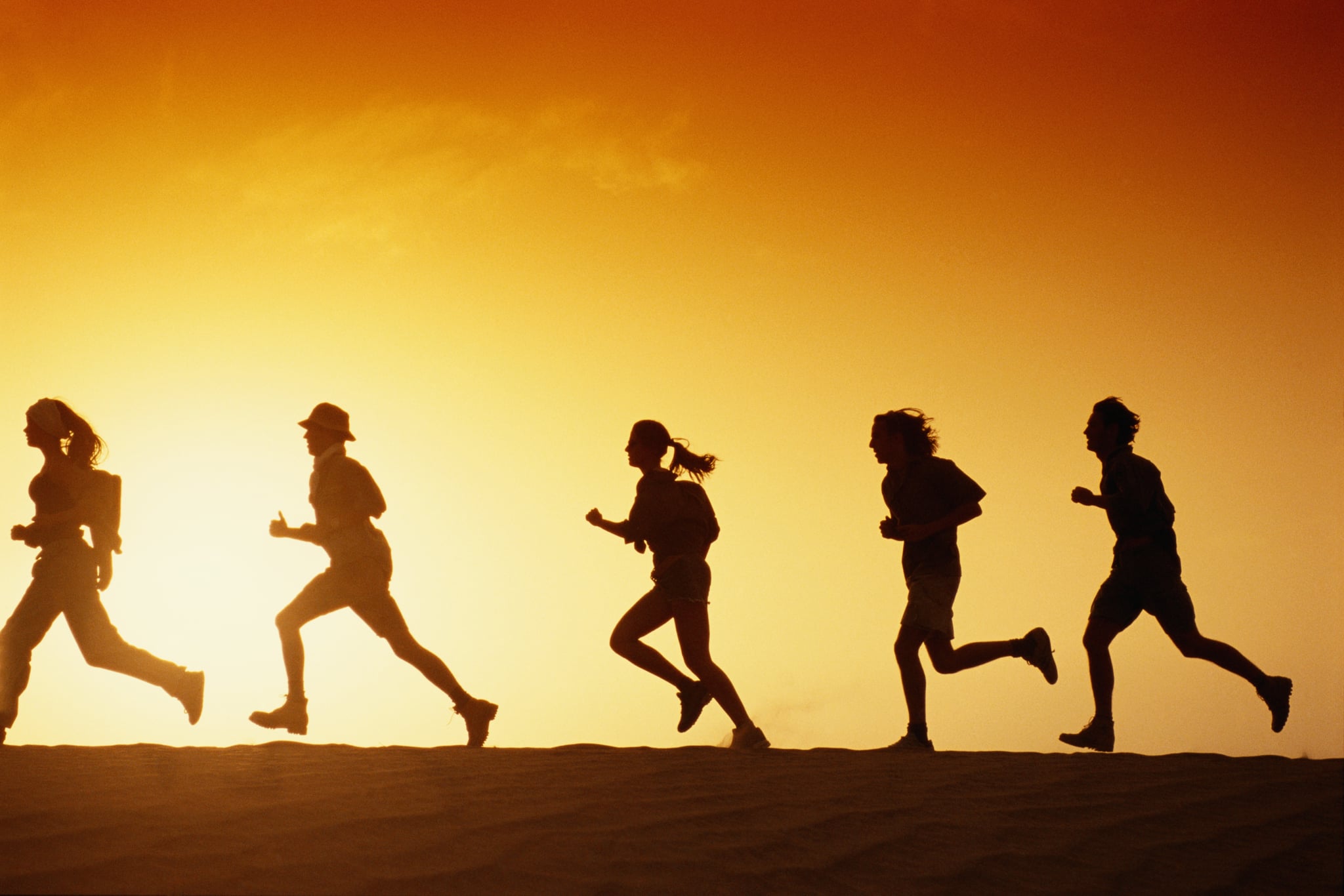 There's a particular stretch of road on the coast of San Diego that used to be the summit of my dad's old running route. It's a hell of a hill, steep and windy. Going up, you're heading into trees, twisting toward a college campus, cars streaking by. Going down, you're cruising toward a view of sandy cliffs spiked with trees, a pale strip of beach, and a dizzying, gaping ocean that blurs and blends until it turns into the horizon. It was the '80s, and I was over a decade from being born. My parents had just moved to California; my dad was studying for the Bar and running hot, hilly runs. They'd both grown up in Iowa and left their huge families behind.

I've never known my dad not to run. He's been doing it since he was a kid, mostly noncompetitive, with a few 10Ks and half-marathons before my sister and I were born. Then there was a long time, in my childhood, when he didn't do any races. I never actually saw him run because he only went in the mornings, on the track at the military base, long before the sun or I were up. Sometimes I'd wake up when the garage door closed and watch his headlights trail across my wall and out of sight.

As with many (many) other things, I only started to run once my sister did. She was training for high school field hockey, and I was 12-ish and bored. My first run was in my chunky Adidas sneakers and AYSO soccer shorts, trailing behind her and my dad on a gray afternoon outside our old elementary school. It was, as my dad likes to say, the last time he ever beat me.

Related:
Running My First 5K Was About So Much More Than Just Exercise

I ran through high school to train for sports but only admitted that I liked it in the latter half of senior year. That Summer after I graduated, my sister and I ran every day. We'd change into our running clothes in the bathroom at my dad's law firm where we filed papers part-time, drive to the beach and hit the boardwalk, weaving through crowds of tourists, or run on the sand and dodge waves and clumps of seaweed. Every run ended with a sprint, because it didn't count unless one of us won and both of us were collapsing.

That December, my sister and I came back from college for Winter break and ran the first of many half-marathons with my dad. My mom acted as support-team-slash-taxi-service. It was post-Christmas and cold by San Diego standards. Before the race started, my dad dropped back a few corrals to match his pace; my sister and I started together but separated to keep from sprinting each other into exhaustion. I wore short leggings and a messy ponytail and felt the starting-line energy for the first and most powerful time: all those people waiting for one thing. I'd never run more than 10 miles. I didn't even know if I could. But we were in it together.

The weird thing about running is that it both is and is not an individual sport. Runners train in teams to push each other and fight the boredom and insanity that comes from mile after mile of listening to your own thoughts. But most long-distance running accolades, with the exception of some relay races, are won on your own. Watch how the professionals run a marathon. The lead pack strides forward in unison like a flock of birds or a school of fish, runners shifting positions seamlessly, reading the air currents around each other's bodies. You almost can't imagine them apart from each other, as anything other than this one weird, many-legged organism. It can't last; someone has to break away, because that's how you win. But for an hour or two, they're doing it together.

Related:
Why You Might Be Feeling Bummed Instead of on Top of the World After Running a Marathon

Running has made me more independent. It's something I do by myself, no matter where I am, a way that I connect with new places. But it's also the thing that brings me, my sister, my mom, and my dad back home. Since that first half-marathon, we've run at least one race together every year, and usually more than one: half-marathons, 15Ks, 10-milers, Turkey Trot 5Ks with aunts and uncles and cousins. This happens even though my sister lives across the country in Washington DC, I live in Northern California, and my parents are still in San Diego. It's something to talk about — training, nutrition, and injury recovery — but more than that, it's something that reconnects us. It brings us home.

Like a lot of runs in San Diego, that first half-marathon ended at the beach. You run along the water for a long time, past the lagoon where I once saw a fish leap straight out of the water, past the Mexican restaurant where my sister and I once ordered burritos with beach sand still covering our hands. It's the last two miles of the race, which are the endless ones; by the time we hit the finish line, I've stopped taking in the sights, and I'm ready to be done.

But if you keep going — run past the finish line, up the stairs, over the bridge that spans the narrow inlet rushing toward the sea — you'll hit a hill. It's steep and windy and awful, going up, but then you turn around. Can a landscape be passed on through a generation, like character traits, like skin color or hair? Because I feel like this is one I was born knowing: the view from the top of a hill, the turn of that road, those cliffs, the ocean.

"Did you know I used to run here?" my dad will say. We do; now my sister and I take planes and fly for hours to do the same. The run might not be worth it; the view might be. The company is.