Lindsey had gone on a trip to Las Vegas with her brother Kevin and his girlfriend Megan, and the three friends were disappointed with the photos from their trip. It was at that moment that they realized they weren't happy with their health or their weight and they wanted to make a change — together.

Lindsey: Before and After 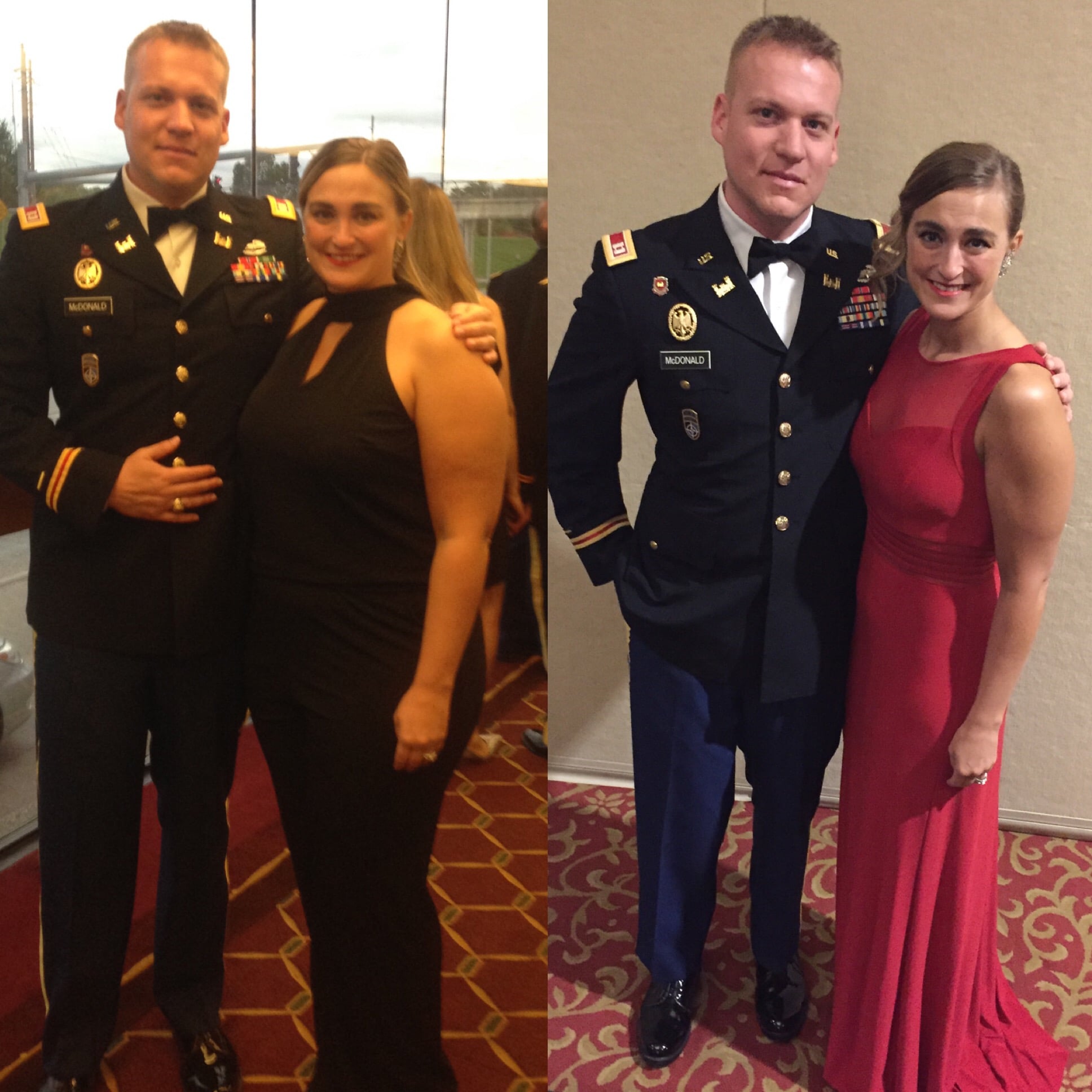 Pictured with her husband, Jayson

Since making that decision, the three opted to give Weight Watchers a chance, and they haven't looked back since. At just 5'3", Lindsey had originally weighed over 200 pounds, but since has lost almost 64 pounds total, putting her body back in a healthy BMI range — and giving her the confidence boost of a lifetime. Here's how she did it and some things she learned along the way about losing weight with a team of friends and family.

POPSUGAR: What made you decide to start your weight-loss journey?

Lindsey Minnick: The moment for me was when we went to Vegas. The shorts that I had planned on wearing (my fat shorts) didn't even fit. I had to go buy new clothes because my fat clothes didn't even fit me anymore. When we got home, I weighed myself and I was 204.4 pounds! I just kept thinking, "How did I let myself tip 200 pounds?"

PS: What made you choose Weight Watchers?

Related:
You Have to See This Incredible Weight Watchers Transformation

Weight Watchers has been different because I have literally changed my lifestyle. I no longer reach for chips, quick carbs, and pasta when I feel snacky. I stopped eating fried food because its SmartPoints count was just too high. I also eat a ton more vegetables and fruits. Someone at work laughed at me because I was dipping my carrot sticks in salsa instead of tortilla chips. Don't get me wrong, I still eat pizza, but I plan it out with my SmartPoints instead of eating the whole thing now.

PS: What's your favorite way to work out?

LM: My favorite way to work out is classes. I get so much more motivated when I can go to a class and compete with other people. If there isn't a class available, I enjoy running outside, [which] gives me time to myself and makes me motivate myself on my own. It is even better when I have a race to motivate myself; I recently did my first triathlon and came in fourth for the women and 13th overall!

"I have literally changed my lifestyle. I no longer reach for chips, quick carbs, and pasta."

LM: I work out most days of the week. Usually I go to a local cycling place three to four times a week. Other days I'll go for a run outside and come home and do a strength-training video. Usually I'll go to the gym and lift two to three times a week with a workout I've found through Pinterest.

Related:
See What It Took For Becca to Lose 106 Pounds — the Before and After Photos Are Stunning

PS: How do you keep workouts exciting?

LM: Aside from cycling or other classes at the gym, I almost never do the same workout twice, which keeps me motivated. It's easy to just print out a workout and take it to the gym.

PS: What was the first big difference, other than the number on the scale, that really made you feel proud and excited?

PS: How do you track your weight loss?

LM: I use the Weight Watchers app. I also took before photos in my underwear using another app when I started, and each time I hit a 10-pound mark, I took another. That way I could see my body changing in addition to the scale.

Related:
Realistic Expectations of What You Can Eat on Weight Watchers

PS: What's a typical day of meals and snacks?

LM: Typically I meal prep on Sundays. Then I just take a preprepared lunch of roasted veggies and protein with a "dessert" (usually either fat-free cottage cheese or yogurt and berries or a banana with powdered peanut butter) to work with me. Breakfast is a crap shoot of overnight oats, egg white wraps, or, if I have time, a meal-prepped breakfast hash with eggs.

Lindsey: Before and After 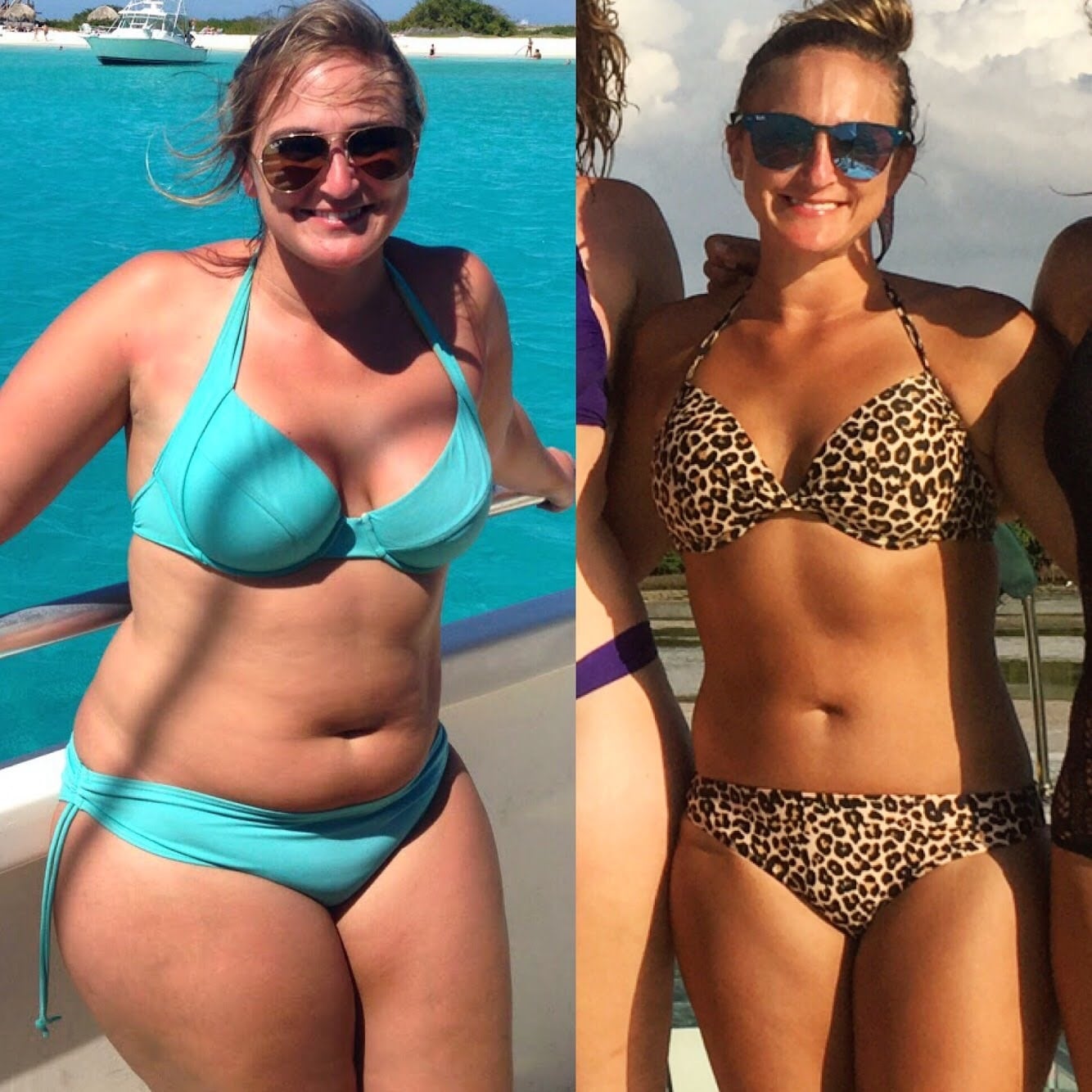 PS: What's the range of calories you eat per day?

LM: I've tried to do the whole calorie counting thing while doing Weight Watchers, but honestly, it's too much work to do both and Weight Watchers works by itself. I stick with my 30 allotted SmartPoints most days during the week. I'll use my weeklies on the weekend if we go out.

Related:
8 of the Best Weight-Loss Programs For Women

PS: What are the healthy staples that are always in your fridge?

PS: How do you strategize for meals out?

LM: I save my weeklies and I'll look at the menu before I go. I have also learned throughout my journey to splurge when I feel the need, because if I don't, I will overeat other "healthy" things to compensate for my desire for an "unhealthy" food (usually this means pizza for me).

PS: Do you use a fitness tracker?

LM: I use an Apple Watch. I freaking love it because it has shown me how much progress I have made with my running and cardiovascular fitness. My resting heart rate has decreased tremendously during this time.

PS: What has it been like doing this with your brother and friend?

LM: It has made it work better. There is something to be said for the competition that someone doing it with you brings to the journey. If I wanted to not work out and I saw Megan and Kevin working out, I was definitely hitting the gym even when I didn't want to. If I wanted to pig out and eat all the fried food and I saw my family making healthy choices, I was more likely to make healthy choices.

PS: What was the biggest thing you learned on this journey?

LM: Is it cheesy for me to say that the real thing I learned is that I am stronger than I give myself credit for? I never would have thought that I would actually succeed as much as I have losing the weight. When I started this, my goal was to be a normal BMI for my height, which meant losing 64 pounds. This was freaking daunting for me and I never thought I would achieve this. But I put my mind to it and had the best support system ever, and I did it.

PS: What role did Weight Watchers play in your journey? Would you recommend it?

LM: Weight Watchers has been the only tool that I used to lose the weight. I have and will continue to recommend it to others.

PS: What advice do you have for anyone starting out on a weight-loss journey?

LM: I've tried (and failed at) dieting many times, losing the same 20 or 30 pounds and then going back to the same way I was before. When you put your mind to it and really commit to it, then you can succeed. Make sure others around you know what you are doing and then they will hold you accountable too.

Image Source: Lindsey Minnick
Weight LossWeight WatchersBefore And After Weight LossThen And Now
Around The Web

Healthy Living
If You Want to Eat Potatoes, Rice, and Pasta to Lose Weight, the Starch Solution Is Your Answer
by Jenny Sugar 10/22/20