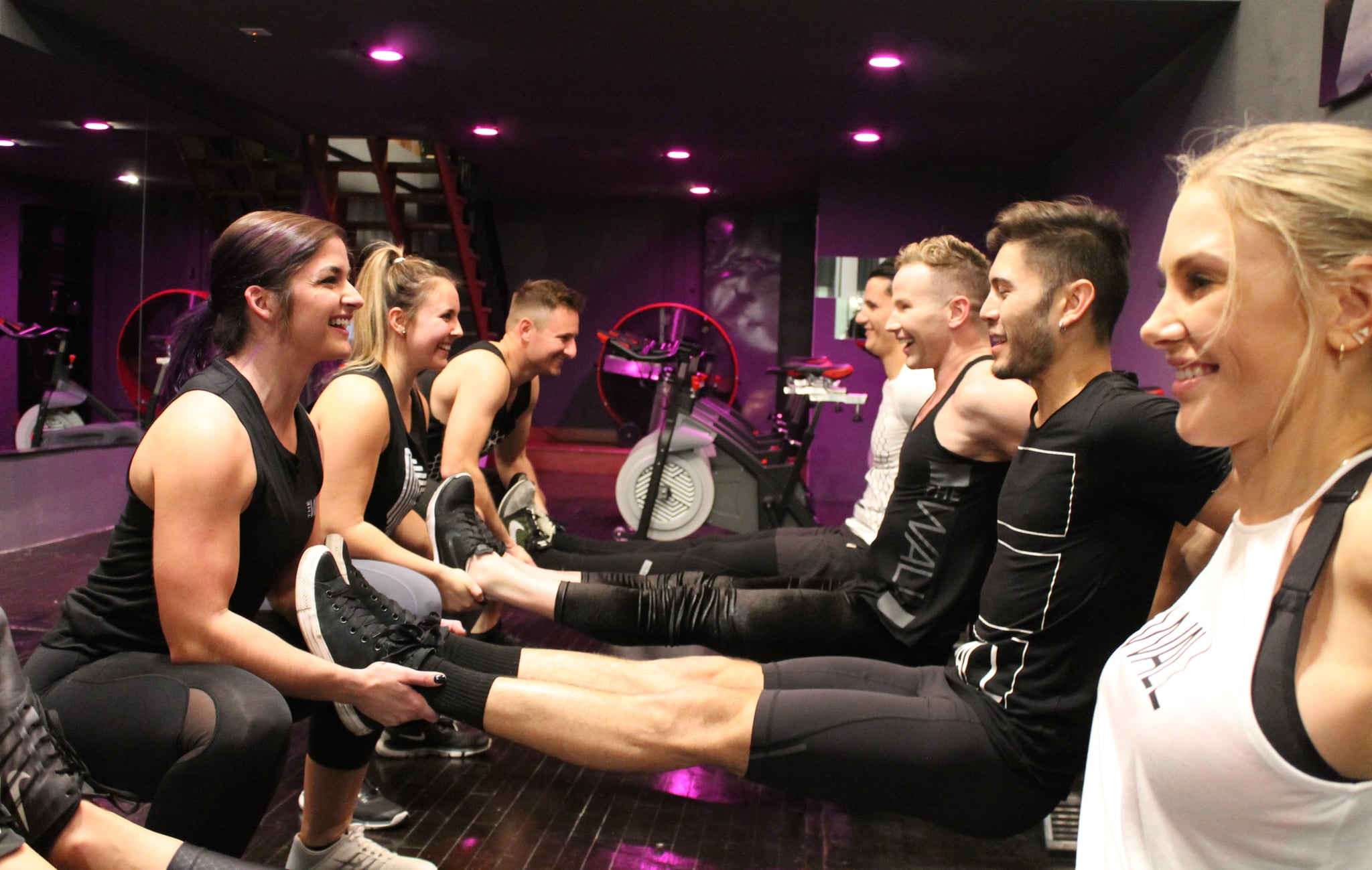 Instructors work out together at The Wall.

As I drove home from a recent weeknight Spin class, I realized that the NPR show I was listening to seemed strangely muffled. In fact, everything sounded like I was hearing it while underwater — the radio anchor's voice, the siren on the ambulance that flew past me, and the Rap Caviar Spotify station I ended up switching to halfway home. It took me a minute to identify the culprit: the blaringly loud music (including an ill-advised EDM remix featuring the "how bow dah" audio from The Dr. Phil Show) I'd just subjected myself to for 55 minutes as I tapped it back.

My slightly dulled hearing only lasted for an hour or two after my Spin session ended, but it continued to nag at me for far longer. Was I sacrificing my ears every time I booked another ClassPass workout? After all, it wasn't the first time I'd noticed my hearing was a little wonky after attending a group fitness class. Don't get me wrong; I like my music loud. Very loud. (I played bass in a punk band in high school, for god's sake.) But even so, some of the classes I attend seem to dangerously overdo it on the decibels. Is the very thing I'm doing in a quest to get healthier actually bad for my health?

"I once exited a SoulCycle class because the music was deafening. My ears were ringing for a few minutes after I left, too."

Maybe I was being too sensitive. Maybe I just had a knack for booking exceptionally loud classes and instructors. So, a few days after that fateful Spin class, I decided to informally poll my Facebook friends. Had any of them either walked out of a workout class because the music was too loud, or been legitimately concerned that the volume in a workout class was negatively impacting their hearing? Fifty-four percent of the people who responded said yes.

"I once exited a SoulCycle class because the music was deafening," one fellow POPSUGAR editor told me. "My ears were ringing for a few minutes after I left, too." Another Facebook friend complained that even though she'd tried to wear earplugs once in an overly loud Spin class, they fell out halfway through. I, myself, can't even count the number of times I've physically moved myself away from a massive speaker in a bootcamp or hip-hop yoga class because I just couldn't take the volume.

Related:
These 14 Fitness Studios Will Make You Wish You Lived in New York

It struck me that this could be a mini-epidemic of sorts for our generation. After all, 42 percent of people who have some kind of fitness members have memberships to studios, according to 2014 statistics from The International Health, Racquet and Sportsclub Association. And millennials (like me) and Gen Z-ers alike are increasingly flocking to boutique workout classes instead of just lifting weights and hitting the treadmills at traditional gyms. In fact, those who attend boutique studios are on average 10 years younger than the typical gym-goer, according to recent statistics from Piper Jaffray.

In combination, those facts seemed revealing. At gyms, music played over loudspeakers is usually piped through at a relatively low, unobtrusive level. Of course, plenty of gym-goers bring headphones to wear during their individual workouts in communal spaces, and I'm sure many of them choose to blast their personal soundtracks at high volume. But what's unique about boutique and group fitness classes is that they don't allow you the option to adjust music to a level that you're comfortable with. Not to mention that loud music tends to lend itself to the cool, aggressive, youthful vibe many of these studios strive to portray.

Anecdotally, in nearly every hip yoga, Spin, or cross-training class I attend in my LA neighborhood, the instructor wears a headset microphone so they can be heard over the high-volume soundtrack to our sweat session. While I'd estimate that more than half of those studios offer complimentary earplugs for customers, I can count the number of times I've noticed anyone take advantage of them on one hand. I certainly never have.

"I always say 'I'm losing my hearing!' And I still pump it up more."

It turns out it's not just attendees who have concerns about how loud music in classes is affecting their hearing. Rocky Horsford Best, an instructor at LA's The Wall, told me over email that she does have some nagging concerns about her own auditory health. Even so, she said, it's unlikely she's going to change her habits.

"I've listened to loud music all my life. And I have noticed my ears ringing from time and again. To myself, I always say 'I'm losing my hearing!' And I still pump it up more," Best admitted. "I blame it on the adrenaline! But if I'm taking a class and the studio has superloud music, I will wear earplugs. And I really appreciate it when the studio has some available."

On the flipside, Best's colleague at the studio, Taylor Mikiska, said she's never worried about it. She says loud tunes are a "necessary" part of her workouts, whether she's teaching or taking a class. "Music is a huge part of being an instructor," Mikiska told me. "I worry much less about if it's loud and more on if it makes people want to move." 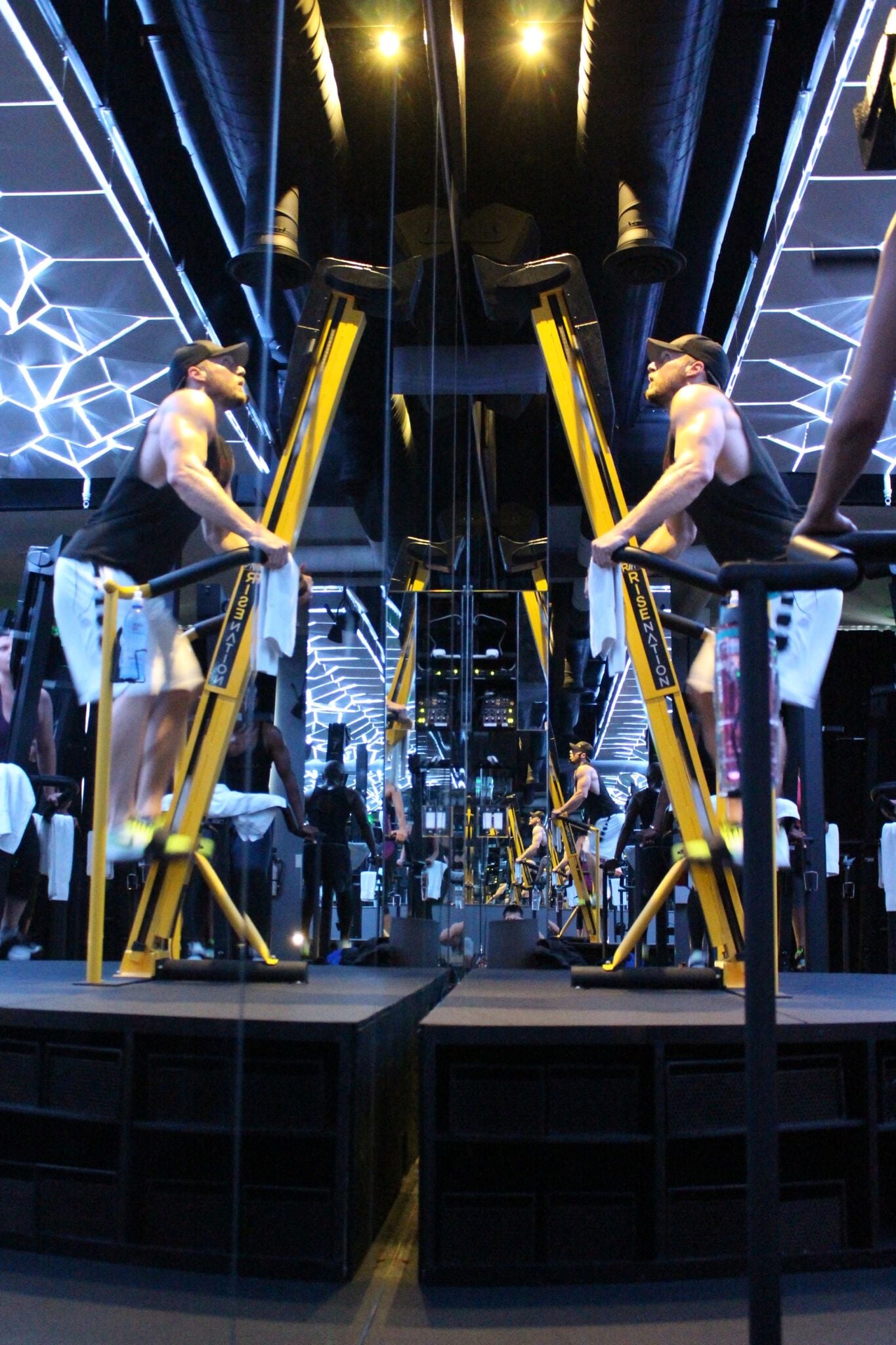 Walsh teaches a class at RiseNation in LA.

Jason Walsh, founder and CEO of Rise Nation climbing cardio studios, is a little more cautious. He said he's thought a lot about the impact loud music has not just on his own health, but the health of the customers who take his VersaClimber-based class. He told me talking about striking a sane volume is even part of new instructor training. Walsh also employs a sound engineer to make sure the music in his studios is enjoyable — that there's no screeching treble or other annoyances — and that it's not necessary to crank it in order to try to get a great sound. "We're trying to create an experience," he said, and music is a key factor.

Still, Walsh isn't fooling himself about the impact his own habits likely have, especially considering he often teaches several classes a week. "I love loud music," he admitted. "I'm a product of the '80s and '90s." (Rage Against the Machine, Daft Punk, and Nine Inch Nails are just some of the artists you're likely to hear if you take one of Walsh's demanding, high-energy workouts, and he does play them at a loud, though not painful, volume.) Even so, Walsh says he recently sprung to have his own custom earplugs made, which cost about $100; a small price to pay, in his view. Before that, he said he'd had experiences similar to mine — muffled hearing and ringing — when he'd taught a few nights in a row sans earplugs. It's worth noting that the Rise Nation studio in my LA neighborhood always has a full-to-the-brim bowl of earplugs at the front desk for customers who want a little less volume.

I decided to contact audiologist Dr. Alexandra Zweig, who practices at New York Hearing Doctors in Manhattan, to get some more clarity on the risks. When we hopped on the phone, I asked her if any workout fanatics or instructors had come in to see her with worries like my own. "It's funny," she told me, "the day I got your email, a patient walked in who was an instructor for Flywheel — he teaches about 13 classes a week — and he was concerned about damaging his hearing."

Zweig said he wasn't an outlier. She told me she sees many relatively young patients, and several have specifically raised concerns that loud music in workout classes could be hurting their hearing, or are actually suffering from tinnitus (ringing in the ear) and think classes could be at least partly to blame. Zweig says there's certainly a risk when it comes to enduring extremely loud music — and that continuous, repeated exposure to harmful volumes for sustained periods of time will "definitely" lead to permanent damage. Scarily, that damage often begins to occur before patients experience any symptoms or notice any ill effects. "We test the integrity of the little hairs in the ears, the cilia," she said, "and we can see damage [to those hairs] in the inner ear even if it hasn't yet shown up on the hearing test." Hearing damage happens when those cilia are damaged, and that harm is permanent, because those cells don't regenerate.

So, how loud is too loud? Zweig says she follows guidelines from the National Institute for Occupational Safety and Health, which advise that 85 decibels for a duration of eight hours is the safety threshold. Amp up the volume just three decibels, and the duration shortens — by half. So, if you take an hour-long workout class, music 94 decibels or above starts to present a risk. For a sense of what those levels really sound like: a rock concert is usually around 120, while a loud lawnmower is about 90. Zweig also points out that because music isn't steady, it's important to consider peak decibels.

When she goes to SoulCycle, she makes sure to use earplugs, and says she usually sees about "10 to 20 percent" of her fellow spinners follow suit. Dr. Zweig also recommends that her patients buy musician earplugs, which cost about $5 a pair. Unlike foam earplugs, they provide a better, snugger fit than disposable foam plugs to ensure no sound is leaking through. They also don't muffle or distort the sound like cheaper plugs tend to do, making the music more enjoyable and the instructor's guidance clear. (Plus, they're more affordable than the custom versions Walsh of Rise Nation had made.) And for that Flywheel instructor worried about his hearing, Zweig recommended downloading a sound meter app to monitor the decibel level of the music he plays in class. That way, he can make sure he's not overdoing the volume and putting himself, or his students, at risk.

"I take these classes myself, so I'd never want to deter people," Dr. Zweig said. "I just want to make sure they're safe."

Zweig's warnings seemed both practical and sobering. I'm certainly not going to stop flocking to loud workout classes. I probably won't even bother to buy a pair of high-quality earplugs on Amazon — I'll just be honest with myself here. But I think the next time I walk into a new fitness studio, I'll swipe a pair of those free foam earplugs from the front desk, just in case.