When I turned 40, aside from the usual jokes about me getting old, a good friend said, "Welcome to the club." The mammogram club, that is. Um, thank you? I put it off, as most women do. I mean, who's sprinting to the doctor's office to have the crap squeezed out of their boobs?! 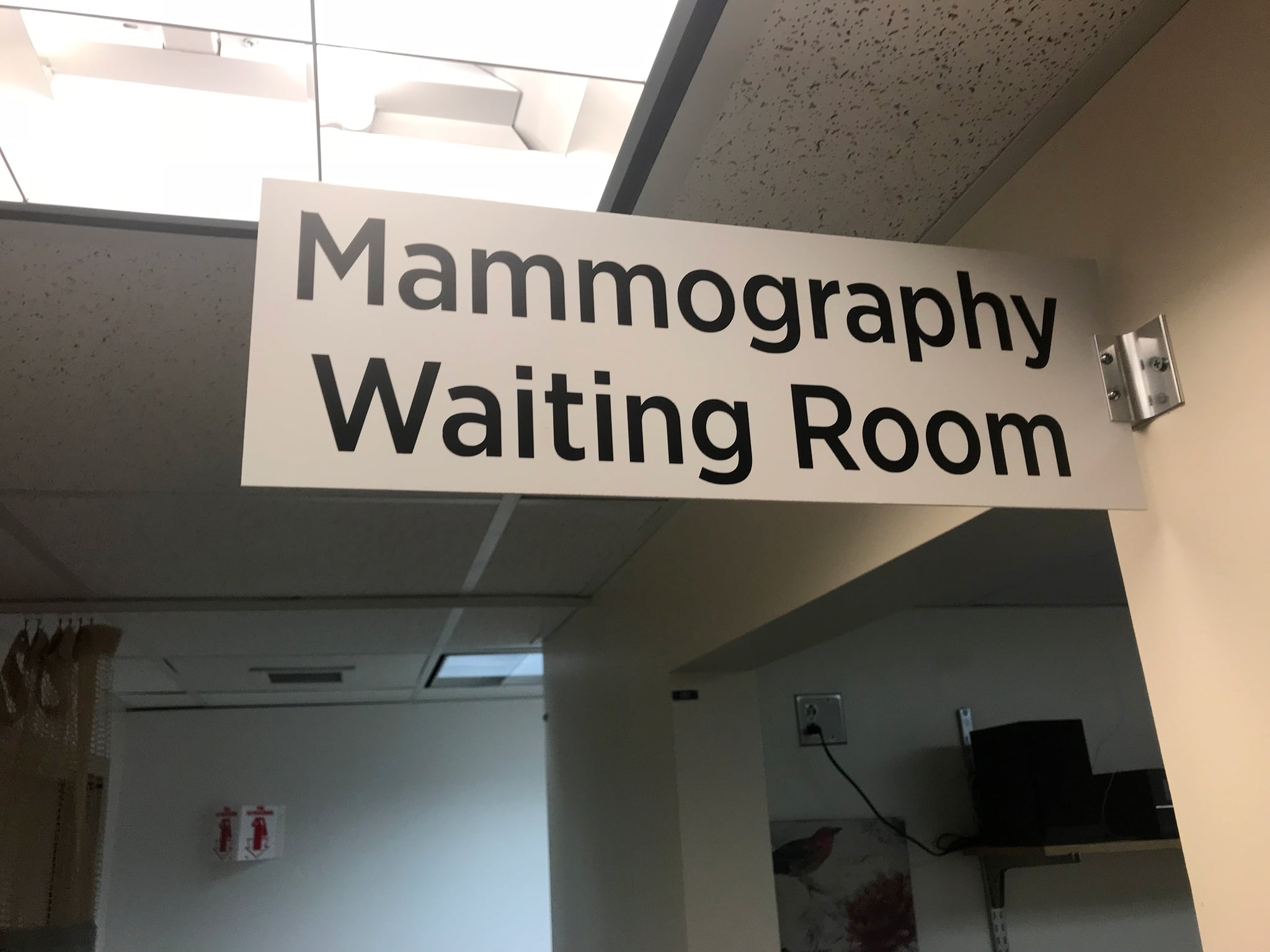 Even though the American Cancer Society updated its recommendations to say women can wait until they're 45, I decided to go at age 40 since I have a family history of breast cancer. Many women warned me about the pain, so I planned a postmammo celebratory lunch with some friends as a reward for enduring this 40-year-old right of passage. I saw a vegan vanilla cupcake in my future.

As soon as I walked through the doors, a wave of sadness and anxiety swept over me that I wasn't prepared for.

As soon as I walked through the doors, a wave of sadness and anxiety swept over me that I wasn't prepared for. Not about the mammogram — I was having flashbacks to the weeks I spent in the hospital with my infant daughter after she almost died. Walking through the bright, sterile halls, my face got warm and tears welled in my eyes. But I took a deep breath and was able to pull myself together. 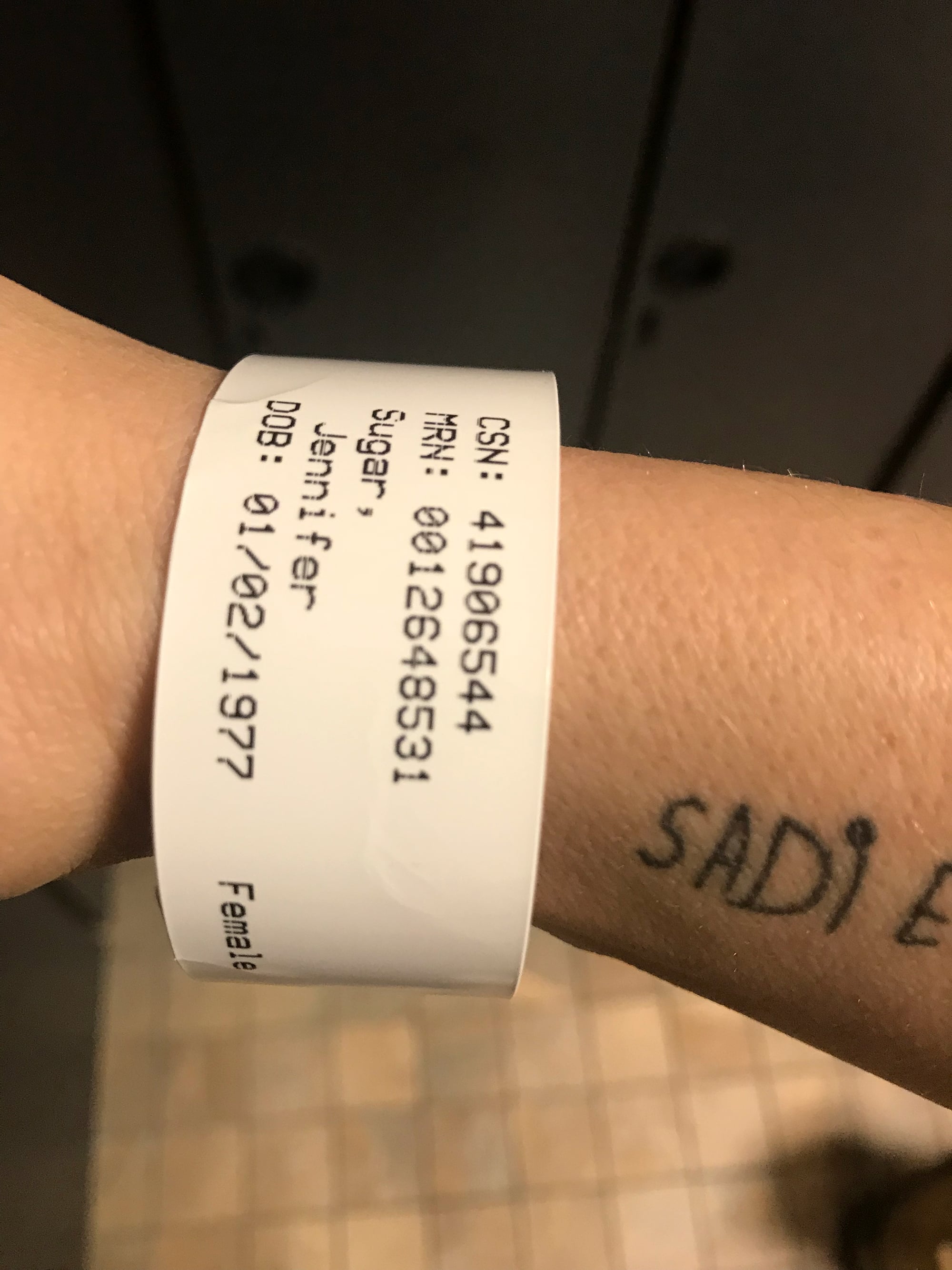 The hospital receptionist handed me a piece of paper that said "mammography" on it along with a clipboard with some questions for me to fill out; they put a hospital bracelet on my wrist. This was feeling very real now. In a matter of minutes, I'd be topless in front of a complete stranger, getting my breasts smashed by a freezing-cold clamp of sorts.

I handed my paperwork to the radiology receptionist and she walked me to the women's changing area. She tried to make me feel better about the whole thing by joking that her name tag should say "best-looking receptionist in the world," and I smiled to make her think she made me feel at ease, but really I was freaking out a little. I just wanted it to be over already. 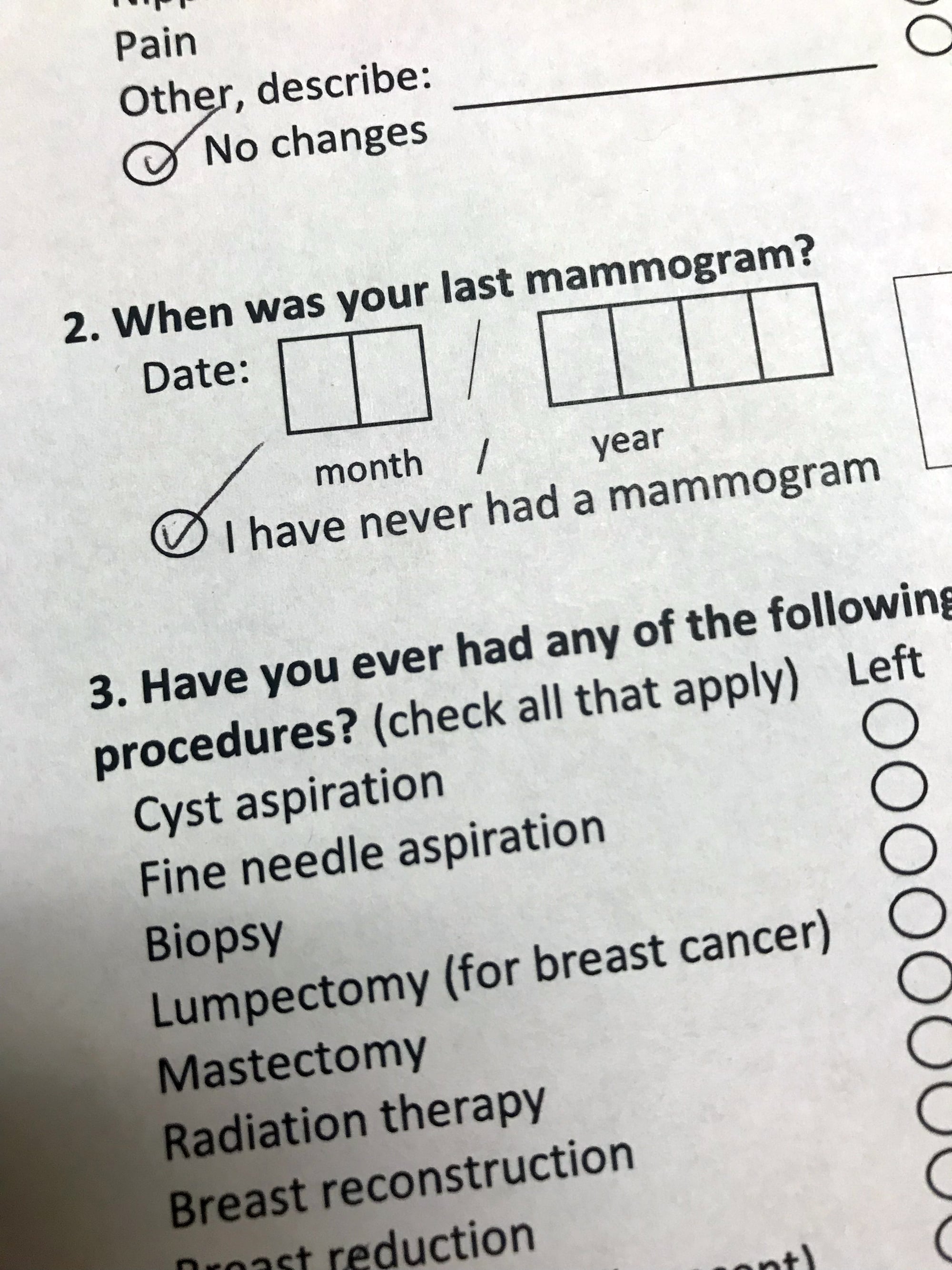 She handed me a blue hospital shirt and left me alone in the the tiny changing room. I figured I'd snap a selfie to remember this moment, hoping I'd be looking back on it fondly, wondering why I was so nervous and worried.

I kept my pants and shoes on, but was naked from the waist up under the blue gown. I walked over to the waiting room and waited. A woman in her 50s, who must have just had a mammogram, walked out smiling. I guessed it couldn't be that bad. Either that, or she's just relieved it was over. Pretty soon that would be me. Walking out of here. 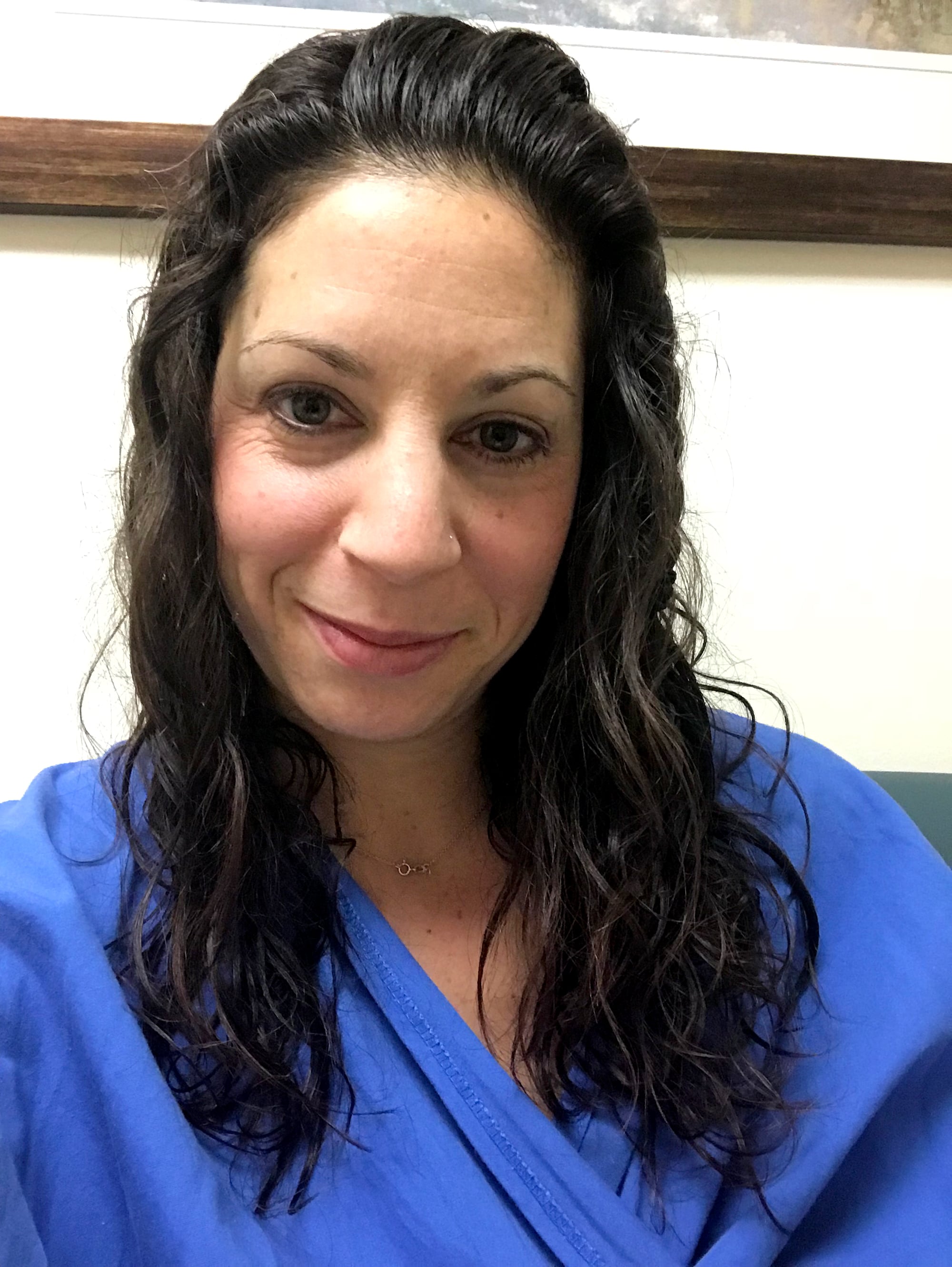 Within a few minutes, the technician called my name and I followed her into a dimly lit room with this enormous machine in the middle. She said, "Oh, you're much too young to be getting a mammogram." "I'm 40," I said, smiling because, thanks to my mother's genes, I look young for my age. Her name was Anne.

It was slightly uncomfortable because I wasn't expecting the machine to clamp down so close to my collarbones, but it lasted maybe five seconds.

"Oh! Your first mammogram!" She looked like she was about to pull me in for a warm embrace. She was so happy for me for some reason. We chitchatted a little about my family history and then she explained what she was going to do. Basically, she'd do one boob at a time and take images of the front and side, and then I'd be done. 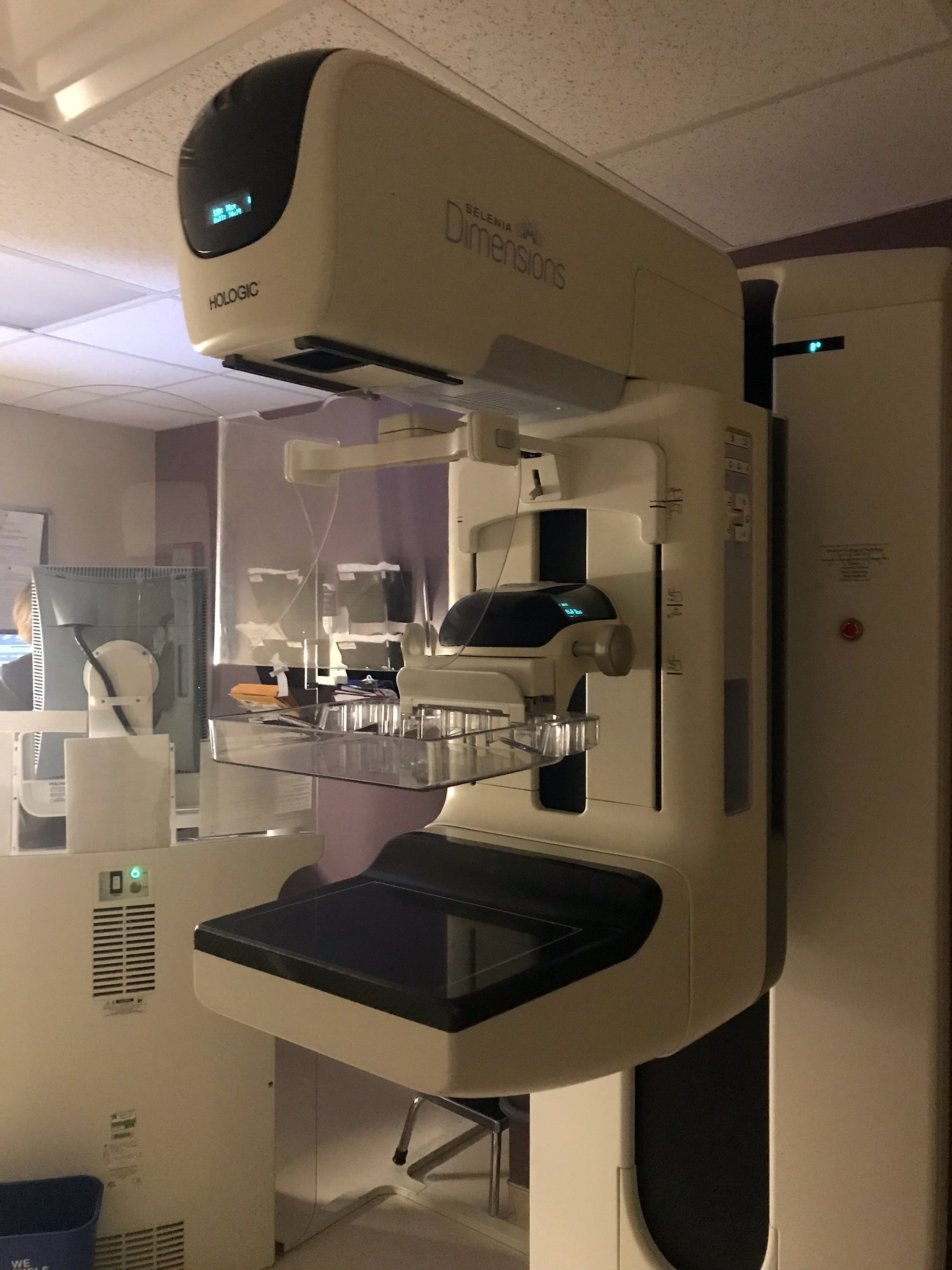 She put an iron belt around my waist to protect my lady parts from exposure and then helped me pull my left arm out of my sleeve. My boob was just hanging out in the wind, and she explained that she'd place my breast on the little shelf and the machine would lower and clamp down on it. Wonderful. I closed my eyes and braced myself for the pain.

It wasn't that bad. Really! It was slightly uncomfortable because I wasn't expecting the machine to clamp down so close to my collarbones, but it lasted maybe five seconds. "You doing OK?" Anne kept asking me. I said I was just sore from doing push-ups in my CrossFit class the day before, and I found out her daughter goes to the same CrossFit gym as me! Small world.

After both boobs were done, I got dressed as Anne explained that many first-timers get a call back within a few days, so I shouldn't be alarmed. If they find something that makes them want to take a closer look, they'll schedule an ultrasound, which is also common for first-timers since they're just getting to know your breasts. If I didn't hear back from them after a few days for a follow-up appointment, I'd get a call within a week with the results.

I grabbed my stuff, thanked Anne for such a positive first experience, and joked that I'd see her next year. Then I walked the hell out of there. I sat in the car and I was frozen a little. It wasn't the pain or the embarrassment of baring my boobs for a stranger (I've given birth twice, so that didn't phase me one bit), but it was the agony of waiting. It was even worse when the fear set in — what if they find something? I didn't let myself go there. I've been sending out all the positive vibes I can, and hopefully I'll get positive vibes in return. I'll tell you that my vanilla cupcake definitely made me feel better.

Healthy Living
Will Dawn Staley Coach the US Women's Basketball Team at the Tokyo Olympics?
by Christina Stiehl 6 hours ago

Healthy Living
"Healthy Is Not a Body Type": This Body-Positive Artist Is Breaking Down Stereotypes
by Maggie Ryan 9 hours ago

Healthy Living
Want to Give Your Yoga Mat a Deep Clean? You Could Try the Washing Machine
by Camila Barbeito 11 hours ago

Family Life
My Mother Was Always Melancholy In September, and Now I Understand Why
by Kate Schweitzer 12 hours ago

Healthy Living
If You're Dealing With Pandemic Depression, You're Not Alone — Here's What You Can Do
by Maggie Ryan 15 hours ago