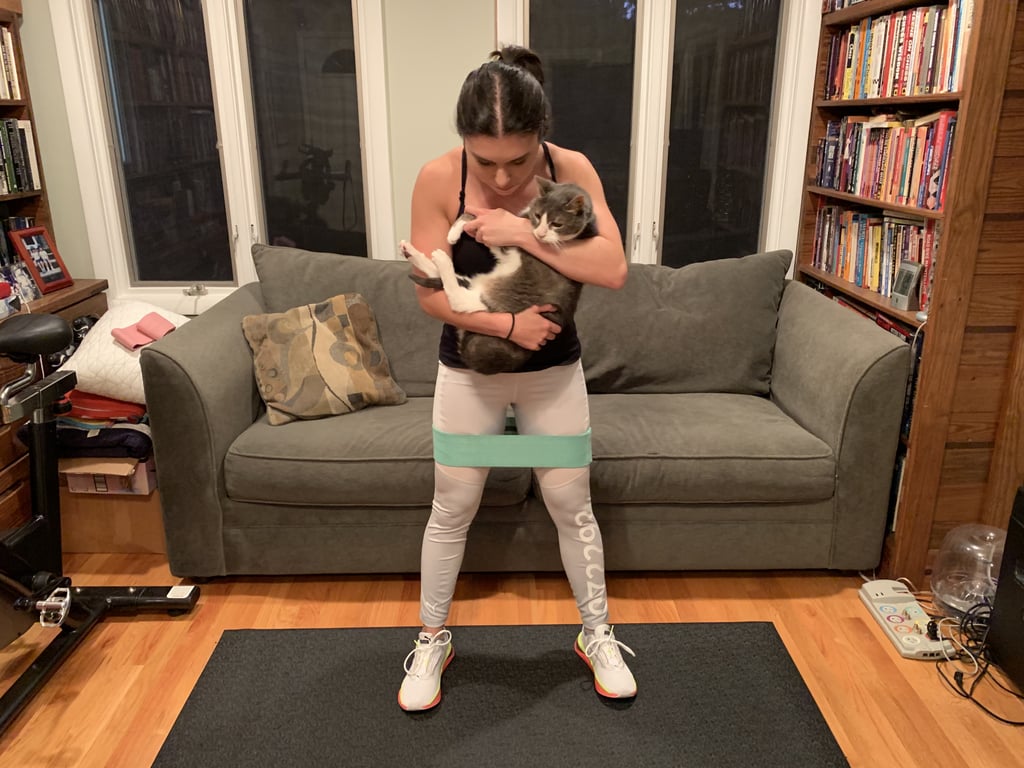 I Tried This Booty Workout With My Cat — and Yes, You Read That Right

My cat Maximus (Maxy for short, otherwise known as Mr. Man) is the light of my life. No really, he's an eight-pound geriatric wonder-feline (he turns 20 in 2020!) who I'm convinced is the animal version of Benjamin Button — the older he gets, the more he looks like a kitten. Everyone who's ever met him agrees. Not to mention, he'll lick you like a dog for hours and he has a peculiar grey spot on his left shoulder that he sprouted after a near-fatal match with jaundice a few years back. But we don't have to talk about that.

Sometimes you'll find me nonchalantly doing squats with Maxy in place of a dumbbell if I want to add a little intensity and don't feel the need to break out the heavy weights. An added bonus is that I get a quad and glute burn and some kitty licks, which are equal parts sandpaper and love, I'm sure. Those licks also take the pain away. So, you can imagine my excitement when I saw personal trainer and CSCS Sohee Lee's lower-body booty band workout featuring her Chihuahua Jellie. Sohee held Jellie all while doing banded exercises that target your booty. I could do this workout with Maxy, I thought. I just had to try.

Do the following exercises with as little rest as possible in between. After completing one whole round, rest for two minutes, and do a total of two to four rounds, resting for two minutes between each.

"You'll mostly work the glutes with these exercises, but the quads and hamstrings will also act as secondary/assisting muscle groups," Sohee told POPSUGAR. She wrote on Instagram that she performed this at the end of her lower-body strength session, but that you can do it as a stand-alone workout, too. For testing purposes, I only tried this out as a quick stand-alone workout.

Sohee said her Chihuahua did make the exercises a little more challenging — she weighed around four pounds at the time — but most people might find that simply using a band will be difficult on its own. "I suggest that you start with just a band first, pet optional, and focus on the mind-muscle connection by really trying to feel the movement in the targeted muscle groups," she noted. "If you'd like to add some load, I suggest holding a dumbbell in the goblet position during the squat and also place a dumbbell on your lap during the hip thrust and/or glute bridge."

Maxy started out truly enjoying himself — he licked me periodically — but as I did more rounds, he got a little antsy. He only weighs about eight pounds or so, making him lighter than the typical weights I use, though the resistance bands did the trick. I used a medium booty band (not the toughest resistance and not the lightest from my three-pack). Holding him also made my arms tired.

As for the circuit itself, I really liked the fact that Sohee incorporated moves that worked my smaller glute muscles — those abductions really got into the glute medius and the glute minimus. (Any time you do a side kick or abductions, you'll feel the burn there.) I completed four rounds in about 15 minutes, and it was a quick way to heat up those muscles and spend some quality time with my wonderful man (cat).

Next time I will definitely try using my "heavy" resistance band and also incorporate this at the end of a weighted leg day routine. Check out each of the moves (and Maxy!) ahead, as well as Sohee's original workout she posted on Instagram. Note: you'll see that the band placement looks a bit high in some of the following exercises. For the best results, keep the booty band just above your knees.