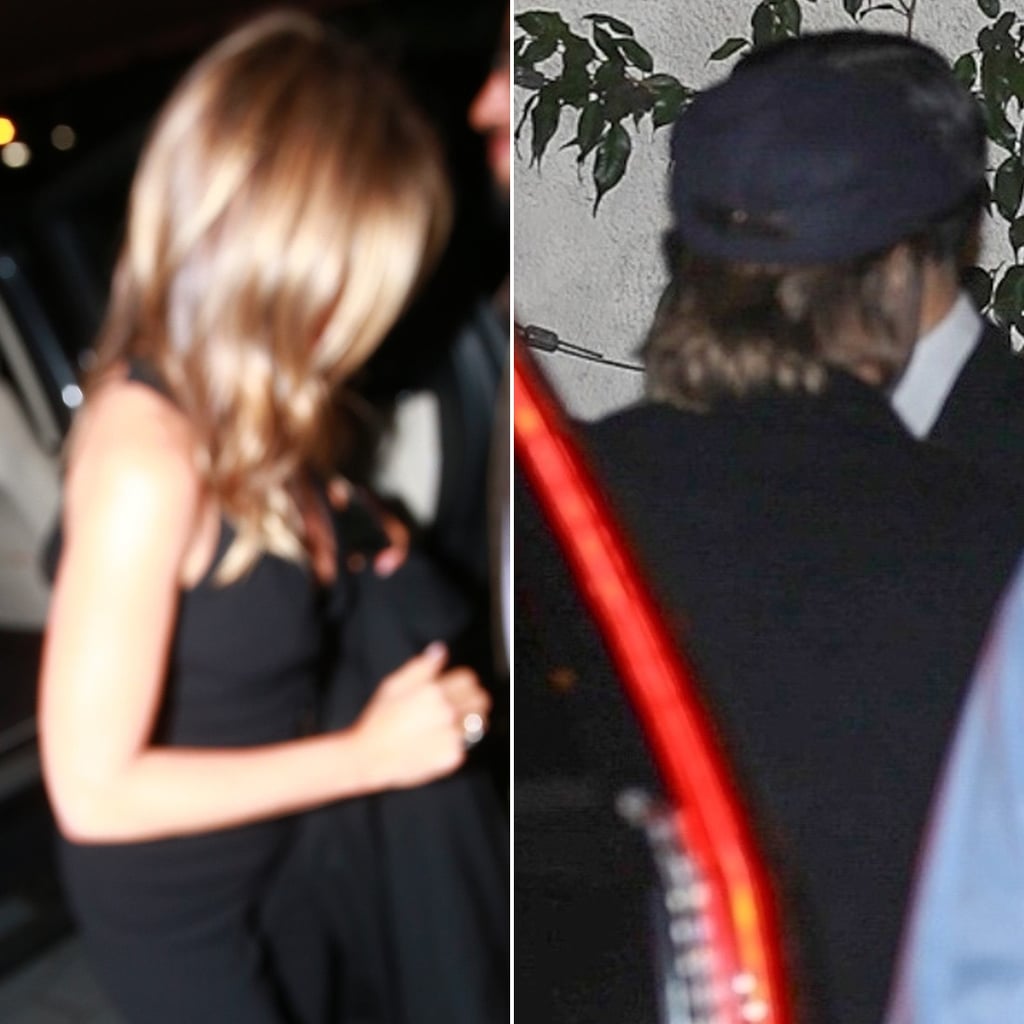 Jennifer Aniston is turning the big 5-0 on Feb. 11, and got a head start celebrating the major milestone with a high-profile birthday party at the Sunset Tower Hotel in LA on Saturday night. The bash brought out A-list pals like Amal Clooney, Gwyneth Paltrow, Barbra Streisand, Demi Moore, Kate Hudson, and Ellen DeGeneres, but the attendance of one star might have you especially shook; Jennifer's ex-husband Brad motherf*cking Pitt was in the building. Yes, Brad Pitt showed up in a black SUV to wish his ex-wife Friends star Jennifer Aniston a happy 50th birthday. This is real.

Jen arrived looking amazing in a sexy black jumpsuit (even though she was going to look amazing no matter what because it's her birthday party, and you look your most gorgeous at your birthday party, that's just science), and Brad snuck in wearing his signature black jacket, newsboy cap, and long locks. According to People, Jen "debated back and forth with friends" about whether or not to invite her ex and was "very happy that he showed up." However, she "didn't really pay any special attention to Brad" during the party. "They hugged and chatted for a bit, but Jen was busy making sure all of her other guests had an amazing time," People added. This makes perfect sense to me: why focus on your ex-husband when George and Amal Clooney need their drinks refreshed, you know? Oh, and if Brad's appearance wasn't surprising enough, you'll be thrilled to know that he wasn't even Jen's only ex there! John Mayer, who Jen dated in 2008, was also spotted entering the event. Let's not forget that Brad was previously engaged to fellow partygoer Gwyneth Paltrow. Can't you just imagine the conversations?

It was previously reported that Brad and Jen, who were married from 2000 to 2005, had reconnected after their recent respective divorces; Brad and Angelina Jolie announced their divorce in 2016, and Jen split from Justin Theroux in February 2018. Those breakups inevitably led to rumors of a rekindling romance between Brad and Jen, and it was reported that Brad "wishes the best for her."

Cut to Saturday night, and the good possibility that Brad clapped and whistled as Jen blew out the candles on her birthday cake (you know he whistled!). Though Brad is currently in an "ongoing process to work through things regarding the kids" with Angelina — and was recently rumored to be romancing Charlize Theron — it's pretty sweet that he showed up to support his ex on such a big night. Keep reading to see photos of Brad and more stars — including Lisa Kudrow, Diane Keaton, Robert Downey Jr., and Jen's dad, John Aniston — arriving at her big bash.

Celebrity Couples
The Cutest Photos of Christopher Briney and His Girlfriend, Isabel Machado
by Alicia Geigel 1 week ago