If you thought that just because the seventh season of Game of Thrones is almost here we'd quit discussing wild theories, think again. The latest possibility comes from Reddit user N355UN0, who noticed something pretty telling in a video interview with the show's costumer, Michele Clapton (which you can watch above). Interspersed with shots of her jaw-dropping creations for all of the characters are brief behind-the-scenes moments, including a shot of Arya (Maisie Williams) riding on a horse with the hilt of Needle clearly visible — similar to how she is in the season seven trailer — and one of Sansa (Sophie Turner) striding through a crypt at Winterfell. At first glance, no big deal. Upon second glance (and then a third, and possibly a fourth), it sure looks like a woman in Sansa's scene is also holding Needle. So, is a Stark family reunion in the works? 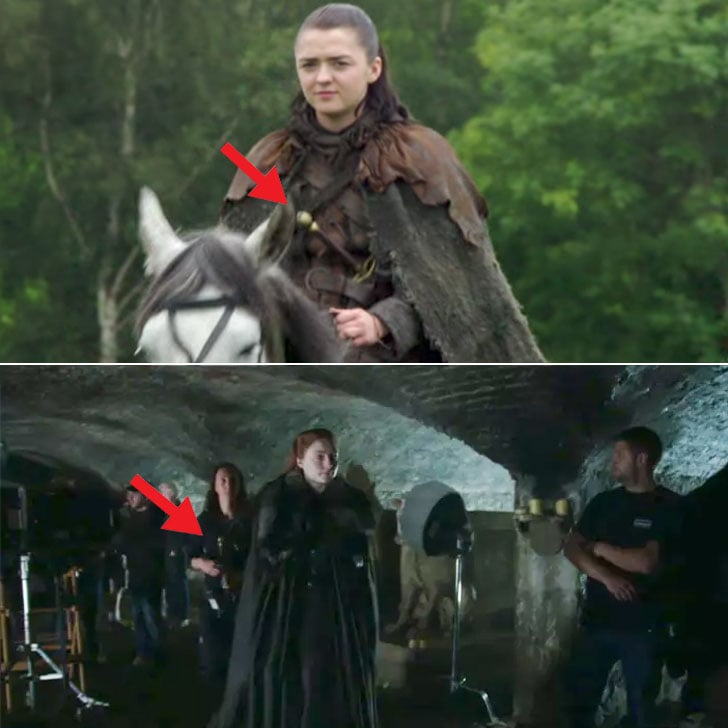 The idea that they might reunite lines up with a recent Entertainment Weekly photo spread that showed Arya on a horse in a location that looks a hell of a lot like Winterfell or Castle Black. If it's the former, it would be the first time she's returned to her family's home since departing in season one with her father, Ned. She's been out of town for a while, but word has to have spread about Jon Snow (Kit Harington) and Sansa taking back Winterfell from Ramsay Bolton, and it stands to reason she'd want to make her way back there.

Related:
Game of Thrones: 5 Things That Will Likely Happen to Arya Stark in Season 7

As always, it's difficult to believe anything other than misery could happen on Game of Thrones, but why else would Needle be in a behind-the-scenes shot at Winterfell? Even if it doesn't pan out, the chips for an Arya-Bran reunion are also in place. In October, Williams and costar Isaac Hempstead Wright (who plays Bran) were spotted on set together in Northern Ireland, where scenes featuring Winterfell and Castle Black are typically shot. The only problem with this theory is that we technically have no idea where she is, since last we saw she was at the Twins, killing Walder Frey and his sons.

On top of the interesting shot of Arya and Sansa, the video also includes a look at what some of the other characters are getting up to. Samwell Tarly (John Bradley-West) is seen hanging out in the Citadel library, while the Hound (Rory McCann) is dressed in heavy Winter gear (is he following Arya to the North?) and throwing some fake snow in front of a fan. Tyrion (Peter Dinklage) pops up as well, going for a quick stroll down the beach where he'll eventually meet up with Jon, Daenerys, and Ser Davos. The short clip of Jon is probably from a similar scene, since he's standing on a cliff with the ocean behind him, and no snow in sight.

Are you convinced? As much as we hate to admit it, it does hold a little more water than the theory that Ser Davos is Azor Ahai.

Netflix
The "Freeridge" Cast Say "On My Block" Fans Won't Be Disappointed: "It's Honestly the Same"
by Noelle Devoe 6 hours ago