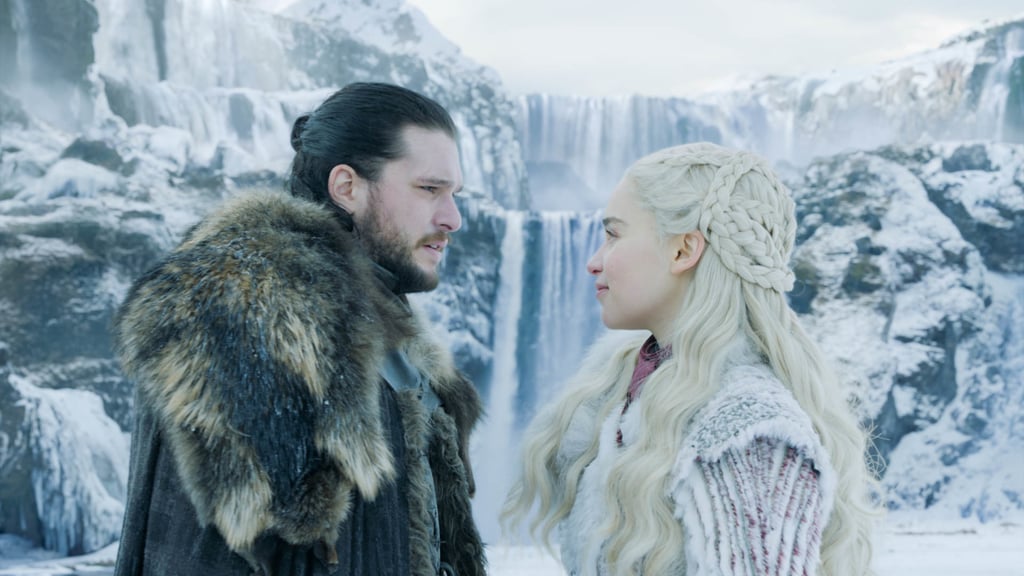 If there's one thing that Game of Thrones fans understand, it's that no one, especially your favorite characters, is safe. Since the moment Daenerys Targaryen has entered the scene, her life has been in constant danger from all sides, and she's met every threat with "fire and blood." With Game of Thrones' final season finally here, the dangers have never been greater, and we're combing over every clue for a hint of what the Dragon Queen's fate may be. Now, call us paranoid, but it looks like we may have gotten a tiny hint that all won't be well for Daenerys, and we're absolutely shook.

In season eight's premiere, there are a lot of things going on for Daenerys. She's arriving in Winterfell, meeting the family of her new lover (whew), trying to keep her dragons happy, and figuring out how the Northerners feel about her. It's rocky from the get-go: the people of the North make it super clear that they didn't invite the queen and her retinue and they don't agree with their former king's decision to bend the knee. But that's totally fine, because Daenerys still has Jon, right? The two even embark on a romantic dragon ridge through the North, ending up at a gorgeous waterfall in the snowy wilderness. Taking in the stunning view, Daenerys turns to her beau and tells him, "We could stay a thousand years. No one would find us." The two embrace and it's all very sweet and endearing (if you ignore the fact that they're related and still don't know). But if something in your head gave you a nagging feeling, there's a good reason behind that.

Related:
Game of Thrones: This Is Why That Scene Between Daenerys and Sam Was So Tense

We've actually heard a similar phrase spoken to Jon Snow before, and the woman who said it to him didn't end up faring too well. In fact, she died in his arms not too much later. Ygritte, Jon's wildling lover (played by Kit Harington's real-life wife, Rose Leslie) said as much to him back in season three when they consummated their relationship in a cave. "I don't ever want to leave this cave, Jon Snow," Ygritte says. "Not ever." Considering she dies in his arms in season four, maybe they should have stayed there after all. And that's exactly what she says to him as she takes her last breath.

It's a little creepy how similar the phrases are, especially when you consider the similarities between the relationships as well. Both Daenerys and Ygritte are tough, well-respected women who challenge Jon. They're also women who aren't quite right for him, whether it's because Ygritte is a wildling that never wants to live on the other side of the wall or that Daenerys is, well, his aunt. They both are whirlwind romances that don't bode well for either party. So, it's possible Daenerys's words may hint at her dismal fate in the future.

Now, we don't want to think of one of the show's well-loved characters meeting their untimely end, but considering how Daenerys is always jumping into danger, it's not far-fetched to believe she won't make it out of the final season alive. Keep reading for our theories on how the Dragon Queen might end her journey on Game of Thrones.

Related:
Why Daenerys’s Ultimate Fate May Have Already Been Revealed . . . by Her Hair
Previous Next Start Slideshow
Game Of ThronesTVTheories