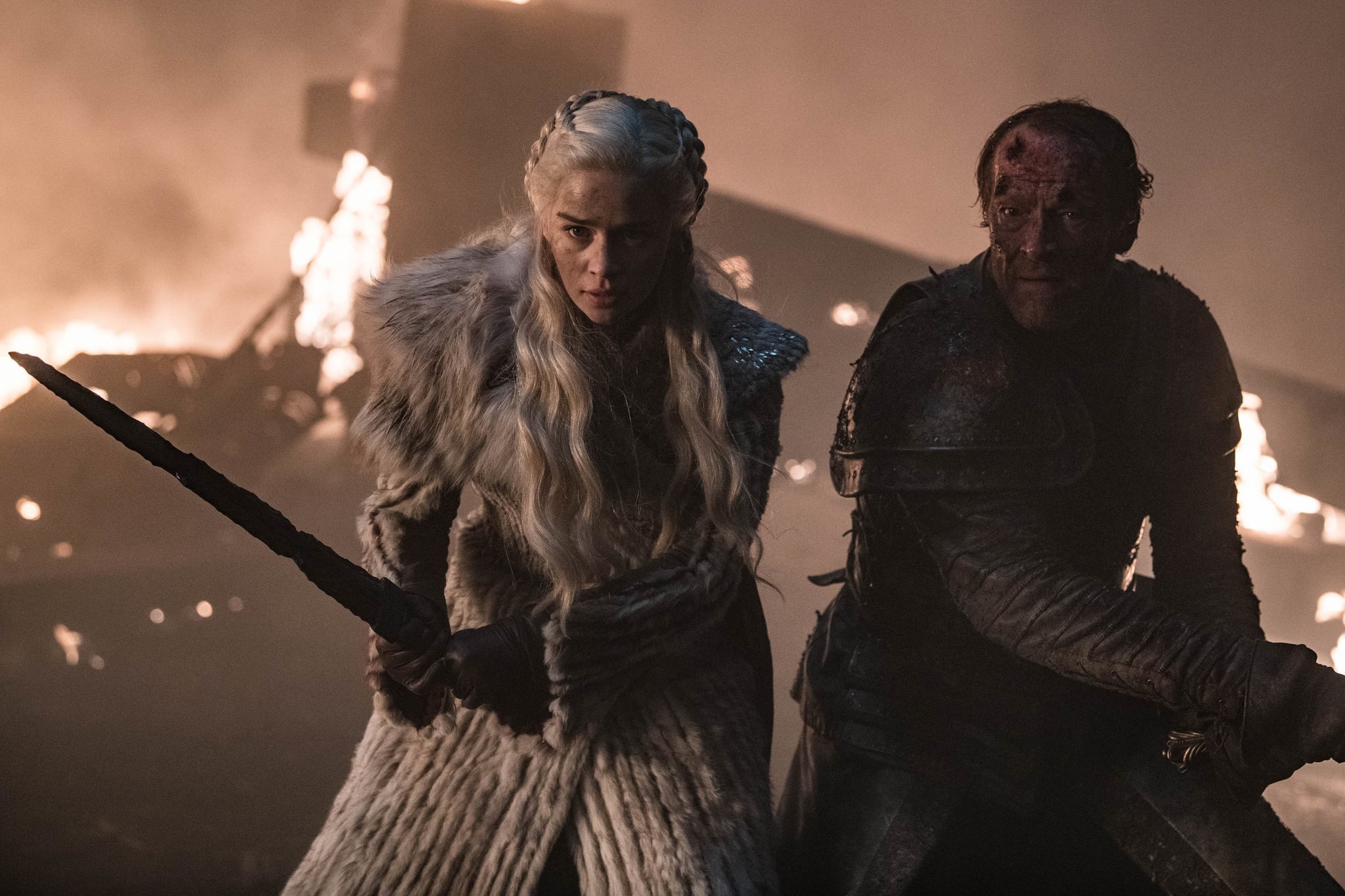 Warning: spoilers for Game of Thrones episode "The Long Night" abound below, so proceed with caution.

As the fires that raged during the Battle of Winterfell begin to cool, I've found myself with a number of important questions about the most recent episode of Game of Thrones. Though "The Long Night" might have been dark to the point of audiences not being able to properly see who was getting stabbed or figure out what the f*ck was going on, Beric Dondarrion and Melisandre (RIP) at least kept things lit well enough for me to wonder about Arya, the Night King, battle strategy (or lack thereof), and death. This is Game of Thrones, after all.

Does anyone actually have a strategy during the big battle, or what?

Listen, I don't want to cast any blame, but . . . actually no, let's cast some blame. First and foremost, why are the Dothraki sent riding blind into the darkness of the battlefield, where they can clearly hear some wights approaching in the distance? Could Jon and Dany really not swoop down to light the pitch black war zone up for them with their dragons real quick? If I were leading my only army into battle against the Night King's massive army of frozen zombies, I'd probably start by attempting to cook as many enemies as possible with my pet dragon rather than just . . . watching them all die an immediate and senseless death?

And on that note, why was everyone in Winterfell just standing around waiting to get sliced and diced by wights before the battle started?! For instance, before the fighting begins, there's plenty of footage of Jon and Dany standing up on a faraway mountain looking down at the battlefield they should be defending, while other characters mill about the castle trying to look busy. For all their talk of the dead being such a threat, everyone seemed remarkably chill about their impending doom. The "waiting to die" method continues as the battle rages on, with everyone deciding to stand around and let the wights come to them rather than regrouping to figure out a better strategy.

Why doesn't anyone in the Winterfell Crypt have weapons?

Sure, I know Arya gives Sansa a small dagger before things get real, but it doesn't make sense that people would be locked down there without anything to protect themselves, save for Tyrion's flask of wine. Surely Gendry could've made a few more dragonglass swords! (Alright, fine, maybe he was a little busy the night before . . .)

And why, oh why, doesn't anyone anticipate the Night King raising the dead inside the crypt?!

Jon has seen the Night King do this over and over again, so it doesn't make sense that he'd overlook this crucial aspect of the crypts filled with dead bodies below the castle. He really needs to get his head in the game.

Where the hell does Melisandre come from?

Last we checked, the Red Woman was jetting off of Dragonstone in season seven to head back to Essos. We hadn't heard from her since, until right before the battle, when she helpfully arrives to light the Dothraki army's swords on fire. (Which is a great idea for the following three minutes the warriors are alive.)

And why does she decide that is a good time to die?

After giving Arya a special pep talk, she morphs into the "guess I'll die" guy meme by taking off her magic necklace and walking out into the snow to rapidly age into dust. Uh, thanks for the help? See ya? I understand she might have seen her purpose in life — to aid Jon Snow, since it seems she is still under the impression he's the Prince That Was Promised — fulfilled since the North defeated the Night King, but it might've been nice to have her help going into the fight against Cersei's forces. Just sayin'.

How does Arya creep up on the Night King?

Yes, Arya is the one to kill the Night King in the end and take out his army of icy followers. But after Melisandre convinces her that she needs to do it, all we see is Arya run off through the halls of Winterfell, and then BOOM — she's suddenly flying through the air to sneak attack the Night King before he can kill Bran, which ends with her stabbing the villain in the stomach. But why don't his White Walker pals and legion of wights who are surrounding him from all sides notice her coming? Arya is small and sneaky, but she's not that small and sneaky.

Does this mean Arya is the legendary "Prince That Was Promised"?

Like I was saying earlier, there's an old prophecy written in High Valyrian that, when translated, proclaims that a storied figure from the past named Azor Ahai will be reincarnated as the "prince that was promised" and will rise to save Westeros from a great darkness, which up until this point we'd assumed was the Night King. So, who is it? We don't know yet. According to the prophecy, "when the red star bleeds and the darkness gathers, Azor Ahai shall be born again amidst smoke and salt to wake dragons out of stone." In addition to that, the prince was said to have a burning sword of flames, named Lightbringer, which Ahai formed while sacrificing his wife, Nissa Nissa.

Before Melisandre sets her sights on Jon, she believes that Stannis Baratheon is that prince, which we of course now know is very much not true. But since High Valyrian is known for being gender-neutral (just take the prophecy about Cersei, for example), there are also theories that Dany could be the prince. But now that Arya has killed the Night King, does that mean she's actually been the reincarnated hero all along?

As much as I wish I could say yes, it seems like a long shot. Killing the Night King seems more like a good way to justify all of her brutal training at the House of Black and White, as well as her assassin arc in general. But does it mean she can "deliver" the world from darkness? I'm not so sure. What if all this time, the Night King wasn't the darkness the prophecy was talking about? Could there be something worse in King's Landing that Jon or Dany will have to contend with?

What is the Night King's plan, exactly?

It seems the leader of the White Walker army is just as unprepared as the Winterfellians. Given how the episode wraps up, it seems his plan is: unleash icy hell, hop off his dragon, kill Bran, bounce. Obviously things do not shake out in his favor.

What nail salon does the Night King go to, do you think?

So not only is he the King of the Night, but apparently he is also the King of Trendy Almond Manicures. Noted. WHY IS EVERYTHING SO DARK?

The show's cinematographers are claiming it was all in the name of realism, but if you're going to spend a gabilliontrillion dollars (a conservative estimate) on the biggest TV battle of all time, wouldn't you want the audience to be able to actually see it happening? That could have been the Avengers out there fighting wights, for all I know.

What is Cersei up to while all this is taking place?

OK, fine, this probably isn't that important of a question since we can all guess it's some variation of: sipping wine, glaring, and complaining about King's Landing's significant lack of elephants.

Why does Sam even bother fighting?

Do I understand his manly-man urge to get out there and fight for his countrymen? Fine. Sure. But should he have actually done it? Hell no! Just because you're a speed-reader doesn't mean you know how to wield a sword, my dude. Dolorous Edd wouldn't have died if he wasn't busy trying to get Sam to buck up in the middle of battle. If all he was going to do was cower and wait to be wight food, he should've taken that sword and decided to protect the crypts, instead.

Related:
Game of Thrones MVP: Arya and Melisandre Prove a Bit of Magic and Trickery Goes a Long Way

Why doesn't Theon have more arrows?

The fact that Bran is only being protected in the Godswood by Theon and a few measly Ironborn soldiers is laughable. With all of Bran's omniscient powers, perhaps he saw Arya killing the Night King and figured it was fine if Theon and co. died to pave the way for that to happen. But he couldn't help the dude out by warning him to stock up on an extra sack of arrows? Or have his men arm themselves with dragonglass swords in addition to their stock of flaming arrows? It's yet another part of their battle plan that makes no [clap] sense [clap] whatsoever [clap].

Daenerys seriously never bothered to learn how to use a sword? Really?

When Drogon finds himself covered in bloodthirsty wights stabbing his wings and hanging from his tail, he decides to ditch Dany and take off into the sky (I don't blame him, not even a little). Abandoned in the middle of a battlefield full of blue-eyed enemies, Dany feebly tries to defend herself before Jorah steps in to save his khaleesi. That's all well and good and provides him a valiant death, but it's wild to me that at this point, Daenerys has had so many talented swordsmen in her orbit and she never thought to ask any of them to teach her to fight. This can obviously be chalked up to her being a little snooty, and overconfident in the fact her dragons would always protect her, but hopefully she's learned her lesson. Clearly, Drogon, much like the honeybadger, doesn't care.

This episode was hyped to be an all-out bloodbath, but at the end of the day, only a handful of recognizable characters find themselves on the wrong end of a wight sword (or getting crushed to death by a zombie giant, but that's neither here nor there). As much as I love characters like Podrick and Greyworm, the Battle of Winterfell seemed like a prime opportunity to give them the brave send-offs they deserve. Hell, I was even thinking the writers would give Brienne and Jaime the ax, so seeing most of the supporting characters survive as well as the main characters is surprising, to say the least.