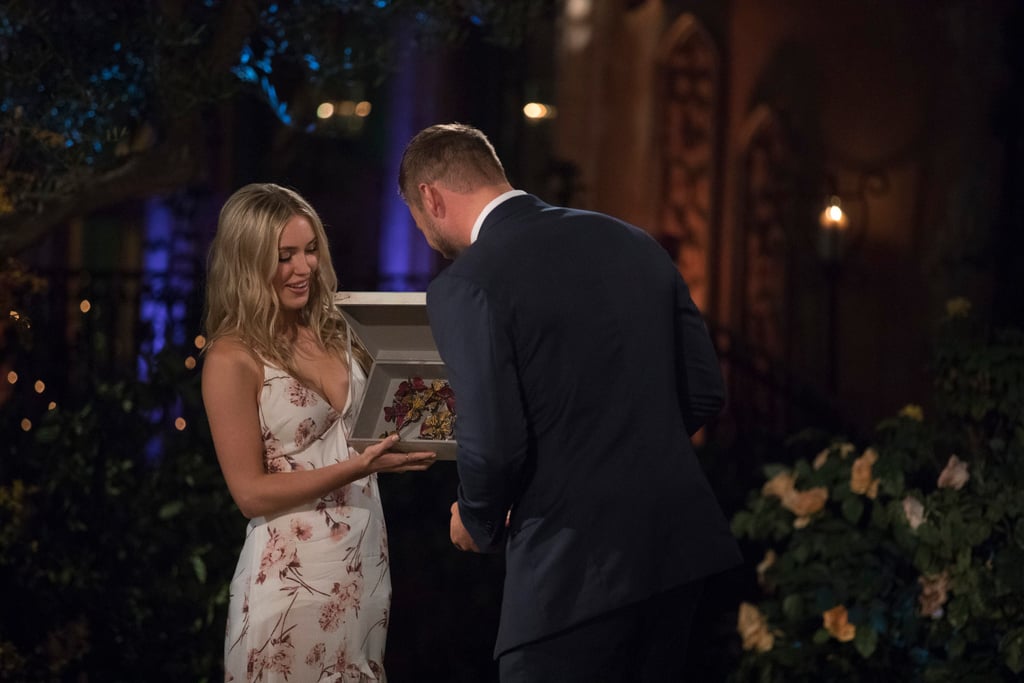 Warning: spoilers for the latest episode of The Bachelor ahead!

Another episode of The Bachelor has taken us on a roller coaster of emotions, and Colton Underwood finally jumped the freaking fence. On the downside, we had to watch him get his heart broken to get to that point.

While the March 4 episode brings us one episode closer to the finale, it also had the most shocking upset of the season so far — the voluntary exit of season 23's front runner, Cassie Randolph. Though Colton and Cassie initially have a super-romantic date in Portugal, it all goes tragically wrong after he confesses to her that her father refused to give his blessing during that incredibly awkward hometown date in Huntington Beach, CA. Cassie's family was visibly unimpressed with Colton from the get-go, but her father seemed particularly agitated by Colton professing his love to three other women and their families.

Colton relays the interaction to Cassie, and she is visibly taken aback. Despite Colton telling her it doesn't bother him because it doesn't change the way that he feels about her (not actually the point though, Colton!), Cassie can't quite seem to shake the knowledge that her father hasn't given them his blessing. The red flag that's been figuratively waving ever so gently in the background starts causing severe gale winds and warning sirens go off. And then, the Bachelor producers pull their dark magic and drop the mother of all emotional bombs. Or should I say, the father? (I don't even regret that one.)

Related:
Colton Finally Jumped That Freakin' Fence on The Bachelor, So We Can All Die Happy

That's right, Cassie's dad shows up in Portgual to have another chat with his daughter. He reiterates his concerns that neither Cassie nor Colton is ready and gives Cassie that final push she needs to make her decision to leave. Cue the pre-Fantasy Suite date where Colton pours his heart out to a visibly pained Cassie. While he tells her that he is falling in love with her and wants to spend the rest of his life with her, Cassie questions how her father's disapproval doesn't seem to bother Colton as much as she expected it to. Cassie admits that her father's words have affected her a great deal more. She reveals that her father came to visit her with echoes of his earlier concerns and that it's made her unsure.

The next 20-something minutes are especially painful to watch, as Colton essentially begs Cassie to stay with him rather than go back home. He flat-out tells her that she is the only one he wants to be with and repeatedly tells her that they can forget the engagement. He just wants to be with her! (This is all the stuff romantic movies are made of . . . Hugh Grant could never!) Even though Colton is essentially solving the problem Cassie and her father put before him, Cassie still struggles with the entire situation. From the outside looking in, it seems like Cassie doesn't want to admit that she simply doesn't know if she wants to be with Colton at all. In the end, it doesn't matter; Cassie tells Colton goodbye and leaves in a black van (and Colton jumps the fence). Though that may not be the last time we see her . . .

Of course, Bachelor Nation couldn't stay silent during such a dramatic exit! Opinions were pretty unanimous in thinking that the entire situation was tragic from beginning to end, though a lot of people were left wondering exactly how this leaves us for the two-night finale airing on March 11 and 12. Check out some of the most relatable reactions ahead, and get ready for the "Women Tell All" special, airing Tuesday, March 5!

Related:
Now That Cassie Is No Longer Starring on The Bachelor, Here's What Keeps Her Busy
Previous Next Start Slideshow
The BachelorTVCassie RandolphTwitter ReactionsColton Underwood