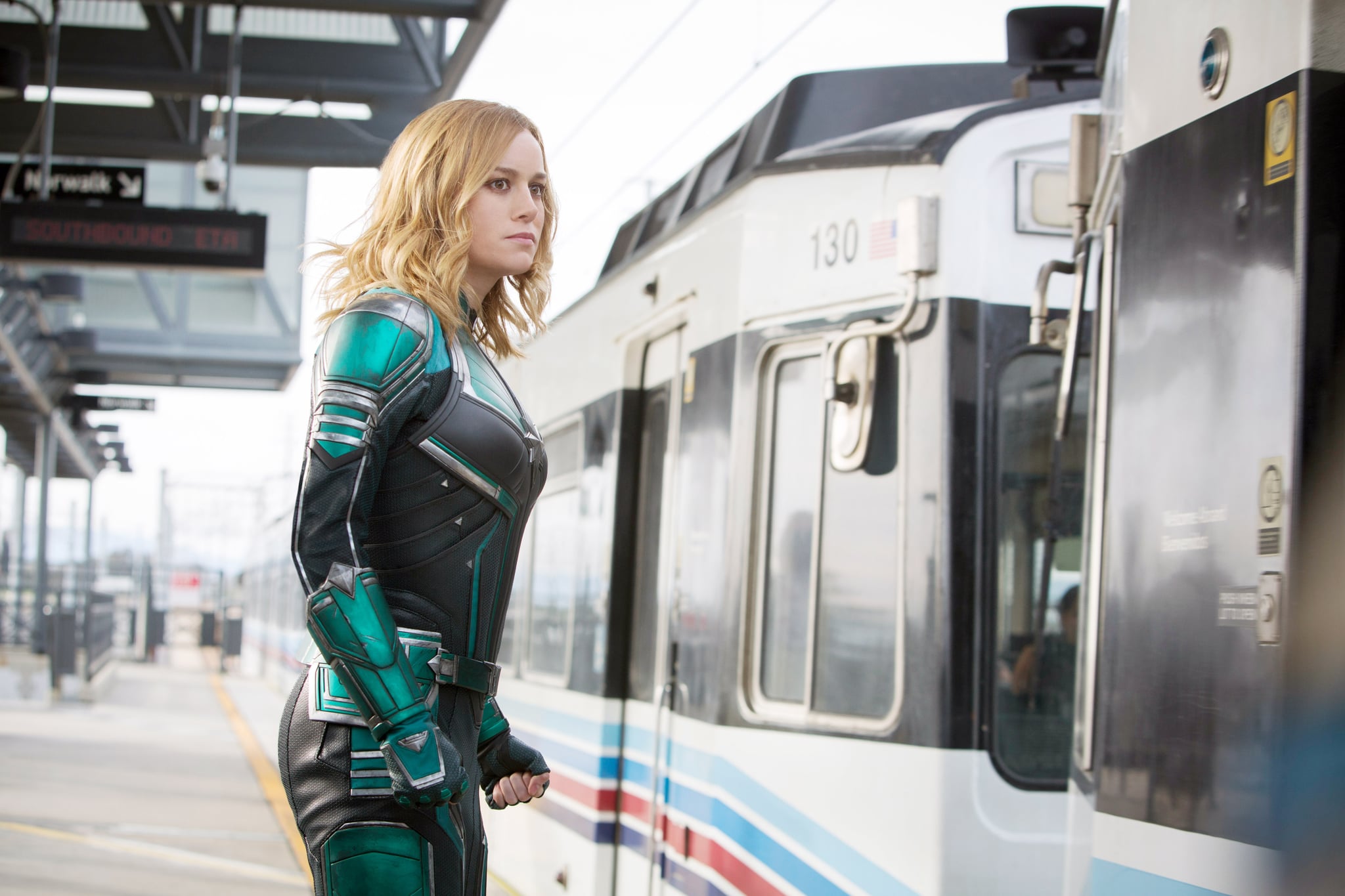 If you're one of the millions of people still devastated after watching Avengers: Infinity War last year, join the very, very sad club. At the end of the epic Marvel team-up film, we lose exactly half of our favorites characters after Thanos gets his hands on all six Infinity Stones. The Mad Titan is on a mission to destroy half of the universe and succeeds with just a snap of his fingers. Sound like everything has gone to sh*t? Basically. However, there is hope out there thanks to a clever, last-minute move by Nick Fury, and a postcredit scene tucked into the end of Captain Marvel.

Before we get to the interesting footage in Captain Marvel, you need to recall Infinity War's only postcredits scene, in which Samuel L. Jackson's character sends a message through a beeper (so '90s, right?) and it shows a red, yellow, and blue logo. Of course this turns out to be Captain Marvel's insignia, which we know for certain since she gives Fury the beeper at the end of her own standalone film. But now, since Carol Danvers is officially a part of the Marvel Cinematic Universe, you should probably get to know her since Captain Marvel doesn't cover everything about her origin story. Oh, and there's the matter of how she just might be the key to saving the Avengers and the rest of the universe. No big deal.

Related:
Bring Tissues to Captain Marvel, Because Its Bittersweet Stan Lee Tributes Will Make You Sob

In the comics, Carol Danvers crosses path with the original Captain Marvel, which is a mispronunciation of his real name, Mar-Vell, at an Air Force base. She gets her powers after a machine created by the Kree alien race, which Ronan the Accuser from Guardians of the Galaxy belongs to, explodes. Mar-Vell's powers transfer to Danvers in the process, giving her powerful abilities. At first she goes by Ms. Marvel, but she eventually adopts the moniker of Captain Marvel. The movie diverges from the comic books in a few big ways to keep things cohesive with the other films in the MCU, but essentially Carol's core story remains intact.

What really changes is that Mar-Vell is a woman, her Air Force superior and mentor, played by Annette Bening. Mar-Vell confesses that she's working on a top secret project that will help "end wars," which a then-human Carol and her BFF and fellow pilot Maria Rambeau agree to help her with. During one of the test runs of the project, which is focused on building out light-speed tech, Carol and Mar-Vell's jet is shot down by an alien and Mar-Vell is murdered. In an effort to keep the tech from getting into the wrong hands, Carol shoots the light-speed energy core, which explodes and infuses her body with Kree alien DNA and special powers strong enough to defeat Thanos.

According to her official Marvel bio, Captain Marvel's current powers include flight, enhanced strength, durability, and the ability to shoot energy bursts from her hands. She is also a highly skilled pilot and trained extensively in hand-to-hand combatant, which checks out since she's a member of the Air Force. In the comics, once Danvers gets Mar-Vell's powers, she's able to "metabolize solar energy and convert it for a variety of uses, including superhuman strength, the projection of photon energy blasts, and flight," according to his official Marvel page. "Mar-Vell also possessed Cosmic Awareness, which could increase his intellect, granting him limited precognitive powers and the ability to ascertain an opponent's weakness. At one point, he also possessed the ability to teleport and cast illusions."

While Captain Marvel's film counterpart definitely possesses a lot of these abilities, she doesn't seem to have all of them. Then again, the film tracks her arc from trying to control her powers while serving for the Kree, to eventually realizing that trying to suppress them in the first place is what's been holding her back from embracing her true destiny. Perhaps in time she'll grow to develop more powers, and discover new ones within herself. A key scene towards the end of the film sees her practically exploding with power, zooming through the sky and exhibiting enough strength to stop one of Ronan's spaceships mid-flight, and then slice through the rest of the them like a knife through butter. And that's without any extended period of training!

How Can Captain Marvel Defeat Thanos?

With Mar-Vell's powers, Captain Marvel technically could use her Cosmic Awareness to restore reality to a time before Thanos gets control of the universe like Mar-Vell does in the comics. If that happens, the ending of Avengers: Infinity War would essentially be reversed, which could mean the Avengers who die can come back. But we know that in the Captain Marvel movie, Carol Danvers has yet to exhibit any hint of this specific power. However, at the end of the film, she pops up at the Avengers compound in front of Steve, Nat, and Bruce looking for Fury — clearly her powers had to have evolved in some way to make traveling through decades possible? Another potential storyline for Thanos's defeat could be, as in the new 2017 comic series, a team-up between Captain Marvel and another powerful alien (in the comics it's Mar-Vell, but that definitely won't happen in Endgame since Mar-Vell has been killed), who join to defeat the evil villain together.

Who Plays Captain Marvel in the MCU?

Brie Larson slipped into Carol's iconic suit in the film, bringing some snark and sass to the intergalactic pilot. We can't wait to see how her personality mixes in with the rest of the Avengers in Endgame!