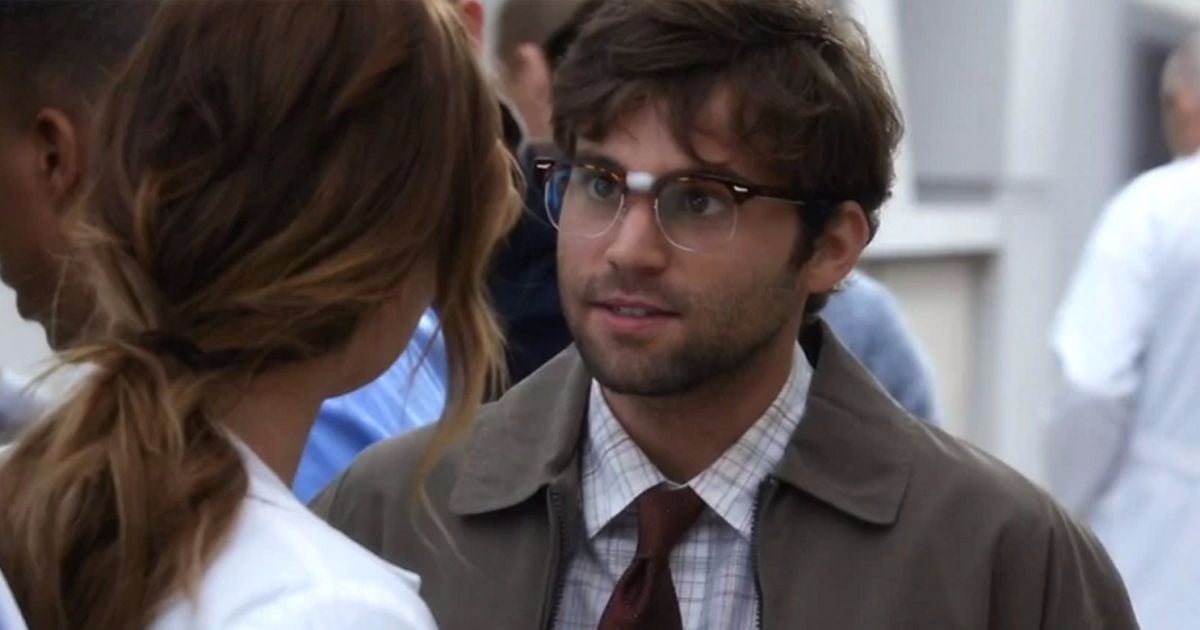 In Grey's Anatomy season 14, fans meet six new interns. They're goofy, clueless, and confused, much like Meredith and Alex in their baby years at Grey Sloan. But we have a lurking feeling that their presence isn't all fun and games. Why, of all times, did Grey's introduce new interns now? And why are they so fishily similar to the show's original season one interns?

So far, we have a broad sketch of Levi, who drops his glasses into an open cavity during surgery, and Sam, who shares a complicated history with DeLuca. In past seasons, Grey's has featured a few intern groups, including Meredith's, Lexie's, and Jo's. But neither Lexie's nor Jo's class has been given as much special attention.

There are also many striking similarities between Meredith's class of interns and the new interns: hookups inside on-call rooms, freak-outs during emergencies, and of course, crippling self-doubt during surgery. As we see in the special 300th episode, the new interns even call dibs on the same hangout spot as Meredith's gang back in the day!

The writers have been really making sure that we get that sense of déjà vu from this new pack of interns. Perhaps the showrunners just know how much millennials love nostalgia. Maybe these new interns and their similarities to the original five interns are simply treats for devoted fans. Still, we have good reason to question their presence.

At the very least, the new interns symbolize the start of a new era. As we see with Meredith's Harper Avery win, the mentee has now become the mentor. Meredith echoes Dr. Webber's wise mentorship back in the early seasons of Grey's. As he freaks out about giving blood in her OR, Meredith kindly reassures Levi that he'll be okay. The mentor-mentee theme grounds story arcs for a few characters: Meredith as the seasoned Harper Avery winner, Jo as chief resident, and DeLuca as the handsome resident harboring an illicit relationship with an intern.

Aside from thematic significance, the new intern invasion may mean the beginning of the end. It hurts us to admit it, but Grey's could be coming to an end. This wouldn't be the first time new interns coincide with the end of a television show — it's a trope that's tried and true. House and Scrubs both end shortly after the arrival of new interns (a group of interns for Scrubs and Martha Masters for House). While it looks like Grey's isn't at risk for cancellation anytime soon, it's no secret that Shonda Rhimes is busy. She's currently cooking up a firefighter spin-off of Grey's as well as a new Netflix series. She's already wrapped up Scandal — will the beloved hospital drama receive the ax next? Are we being set up for a short-lived spin-off, like Scrub's web series Interns?

Then again, we could always chalk up the new character additions to simple logistics. The showrunners are simply bringing in new characters to fill the Nathan and Stephanie-shaped holes in our hearts. Characters come and leave so often on this show! Since there are six new characters, we could speculate that at least a few characters are leaving this season. The most obvious exit is Jason George, who will star in Shondaland's upcoming firefighter show.

But will we be further devastated this season? Will Jo still stay around after her husband has tracked her down? Will Owen dash out of Grey Sloan to find love with Teddy? We won't know until the season finale, and this anticipation is trapping us in a glass case of emotion.

by Mary Everett 28 minutes ago